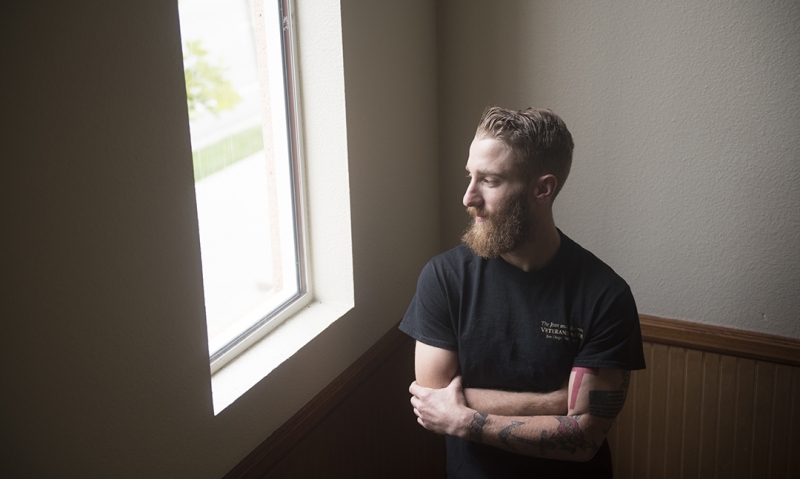 Tyler Kinslow, a Navy veteran and student at San Diego State University in the Student Veterans House on Monday, May 15, 2017 in San Diego, Calif. Photo by Clay Lomneth / The American Legion.

“Although VA has encountered issues with implementing the Forever GI Bill on Congress’ timeline, we will work with lawmakers to ensure that – once VA is in a position to process education claims in accordance with the new law – each and every beneficiary will receive retroactively the exact benefits to which they are entitled under that law,” he concluded.

American Legion National Commander Brett Reistad issued a statement on the issue, highlighting the financial strain it has put on student veterans.

“We are glad see VA taking the steps to do right by the veterans who have been underpaid or not received their GI Bill benefit payments,” Reistad said. “It has been the cause of undue stress for thousands of student veterans and it must be rectified.”

Wilkie’s statement comes on the heels of implementation issues pertaining to the Forever GI Bill coupled with the confusion of conflicting statements released by VA to the media and congressional staff members.

The Forever GI Bill expands veterans’ education benefits and was passed last year by Congress. Housing allowances under the Forever GI Bill are calculated based off where a student veteran physically attends classes rather than calculating based on the location of the main campus. The law dictated this change needed to made by Aug. 1, 2018, but IT issues have pushed implementation back to Dec. 1, 2019. The IT problems resulted in a substantial backlog of claims made by student veterans.