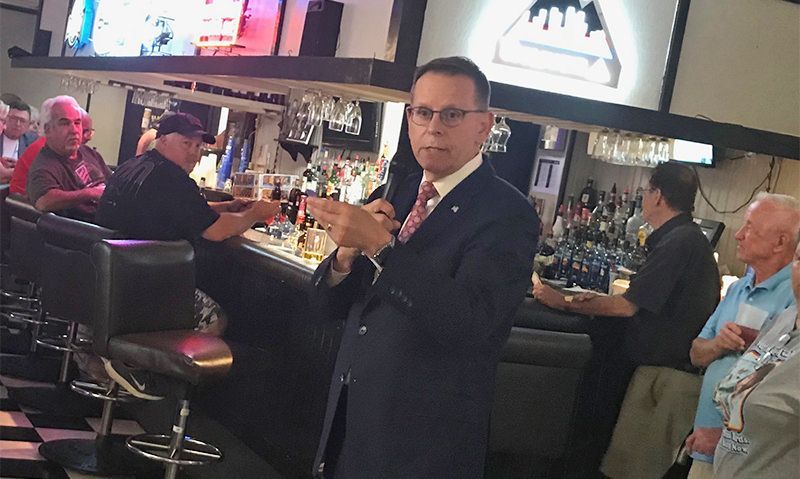 Getting answers from the Department of Veterans Affairs (VA) about benefits can be a challenging task. The VA Benefits Under Secretary told American Legion Post 500 members that his goal is to help get veterans’ questions answered quickly and efficiently.

Under Secretary for Benefits Dr. Paul Lawrence joined a group of veterans advocates and Legion members at Speedway Post 500 located next to the Indianapolis Motor Speedway on Aug. 23. He answered a wide range of questions from Legionnaires about VA and, specifically, how the agency works with veterans to navigate the benefit system.

“We appreciate the opportunity to speak with The American Legion on issues involving the VA and thank them for this relationship,” Lawrence said. “The Legion works with us with a shared purpose of serving veterans in need of our services.”

Since his appointment by President Donald Trump in 2018, Lawrence has made it his mission to make the system more user-friendly. He is in Indianapolis as a part of the American Legion’s 101th National Convention.

“The Legion is a great collaborator,” Lawrence said. “From the local post to the national office, the VA and Legion shares a unified focus as one community. Serve those who have served our nation.”

Newly installed Post 500 Commander Johnette Lawson was thrilled that Lawrence came to her post to speak with her members.

“It’s an honor that Dr. Lawrence visited our small post,” Lawson said. “We appreciated the chance to have him here to hear the concerns of Legion members from the local community.”

“Getting veteran’s issues resolved is a top priority at the VA,” Lawrence said. “We appreciate a chance to share our message that we are here to serve them.”

Lawson invited Lawrence to read off the raffle numbers for Post 500’s weekly drawing. The winning ticket holder had a chance to win $5,000 in the two-phase contest. The winner ending up with a $100 prize.

On Aug. 24 Lawrence spoke to the Legion’s Veterans Affairs and Rehabilitations Commission. He provided a presentation on the implementation of the Veteran Appeals Improvement and Modernization Act, and Procopio vs. Wilkie & House Resolution 299, the Blue Water Navy measure.