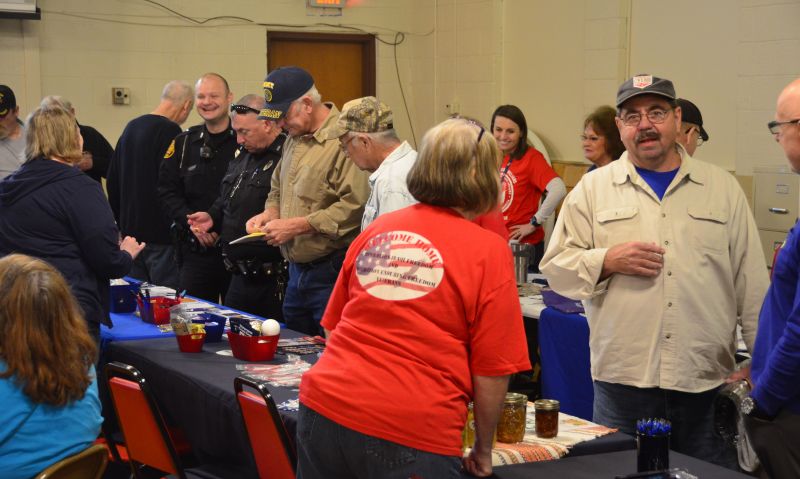 U.S. Air Force veteran Chris Jordan is using The American Legion as his representative for his benefits claim with the Department of Veterans Affairs. When he found out that Clarence Fields American Legion Post 76 in Ashland, Ky., was hosting a veterans expo Jan. 11, Jordan thought it was a good opportunity to check on the status of his claim.

But Jordan, 49, found much more available at the expo. More than 20 veterans agencies and organizations had manned tables, ranging from various offices within VA to local organizations and services, assisting with everything from health care to employment and transition assistance for newly discharged veterans.

“I think in this area it’s important and serves a good function,” said Jordan of the expo. “You have events like this a lot more frequently in areas where there’s a military presence: a base or a large local retirement community. I’ve lived in some of those areas.

“Here you’re away from any of the larger installations, so sometimes people forget that there are veterans that live in these areas. It’s good that they have a place where they can see various organizations that they may be able to reach out to in a crisis or just to get information.”

The expo, which had close to 50 veterans attend during the afternoon, was sponsored by the American Legion Department of Kentucky’s District 9 and was manned by Legion Family volunteers from Post 76, as well as members of the Legion Family from American Legion Post 342 in Willard, Post 43 in Raceland and Post 138 in Olive Hill.

Kentucky District 9 Commander Raymond Barney, a member of Post 76, said he originally wanted to put together “some kind of health fair for the veterans” to raise awareness about what health care and benefits options were available to area veterans through VA and other agencies. He put together a team at the post to help develop the plan, and the idea was expanded to a veterans expo, moving beyond just health care and including organizations beyond The American Legion.

“Everybody brings something to the table,” Barney said. “Some people are able to provide grants to help people fix their houses. Other organizations deal with (home) health care. Even though I’m representing The American Legion … my whole goal was to let veterans know what their benefits are.”

Other posts in the district became involved, including the husband-and-wife team of Richard and Whittney Dallaire from Post 342’s Legion Family. The pair had participated in a Volunteers of America stand down in 2019, where Whittney got contact information for other service organizations in the area. She started by reaching out to those contacts and in doing so received info on other organizations and individuals. The two also went to the Huntington, W.Va., VA Medical Center, extending invitations to the expo to various departments and officers there.

Getting the word out about the expo included flyers, phone calls, emails and social media, as well as contacting local media outlets to increase advance coverage. Offering a wide range of services and organizations served “to bring more (veterans) in, knowing they can get anything they need when they come,” said Richard, Post 342’s commander and District 9’s sergeant-at-arms. “To me, that even helped with the (public relations part). (Media outlets) wouldn’t have covered it if it was just one organization. But you get a lot of them together and it helps you get the word out there to get the veterans here.”

All ages of veterans attended the expo, including Korean War to post-9/11 veterans. Whittney said the intent was to make it easier for any demographic to get the information they need. “This way, any veteran can hopefully get linked up with a resource provider for any circumstance that they are finding themselves in,” she said.

Others members of Post 342’s Legion Family volunteered at the expo, including the Dallaire’s 9-year-old daughter, Carmelita, a member of Unit 342’s Junior Auxiliary who served in the valuable role of checking people into the expo.

Also from Post 342 was its 26-year-old First Vice Commander Cory Rice, who also serves as District 9’s adjutant and Kentucky’s Area C membership chairman. Rice said when he left the U.S. Marines in 2015, he was given a very quick transition assistance briefing before leaving Camp Pendleton.

“When you get out you have no idea what’s going on. You have no idea who you can even talk to,” he said. “Something like this (expo), it gives a chance to put everything out on the table a veteran could possibly need. That’s a big ordeal. We’re getting all these resources to veterans who might not have the time or the patience to look for them on their own.”

The Department of Veterans was well represented during the expo, bringing mobile health screening and Vet Center units, as well as representatives from the Veterans Benefits Administration and other offices.

Veterans Outreach Program Specialist Jeffrey Weems, who manned a table with Vet Center resources, said working with organizations like The American Legion is “absolutely” critical to VA’s mission, getting the department’s resources to some veterans that may not otherwise know what is out there.

While valuable services and information were providing during the event, District 9 also tried to make it an enjoyable experience for those veterans and their families who attended. During the course of the expo a chili cook-off took place, providing a free meal to expo attendees, volunteers and vendors. Multiple gift bags were provided to attendees from various posts in the area that includes socks, toiletries and other items.

Also available were small toys, coloring books, and Crayons and colored pencils for the veterans’ children to use while their parents were seeking help. “It’s a Saturday and sometimes people bring their children,” Auxiliary Unit 342 Secretary Isabelle Sherer said. “We certainly didn’t want them to go home without something in their hands.”

Barney said he’d like to see the expo happen again but perhaps at a different within District 9. “Instead of having it all the time here in Ashland, let’s take (to other posts) and let the other veterans in that area have a chance to come to this,” Barney said.

Joseph “Ray” Copeland, a Vietnam veteran and member of Post 342, needed to fill out a form to authorize The American Legion to represent his VA claim and was able to do so at the expo. He was proud that his organization was in charge of organizing the event. “It shows somebody cares,” he said.