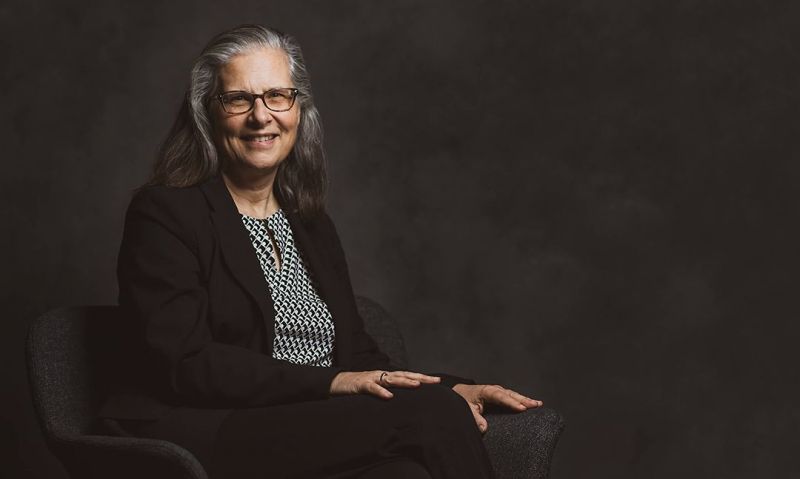 Shelley MacDermid Wadsworth, who grew up in Canada, has devoted her career to improving the lives of American servicemembers, veterans and their families.

For the past 20 years, she has served as director of the Military Family Research Institute (MFRI) at Purdue University, which she helped found. She also is a professor in the Department of Human Development and Family Studies at the West Lafayette, Ind., campus.

American Legion Magazine: Tell me how you became involved with MFRI.

MacDermid Wadsworth: I've always studied relationships between work conditions and family life, and military work is an interesting form of extreme work. When an opportunity came along to create something called the Military Family Research Institute, it was a grant request for proposals from the Department of Defense, I thought it was a really interesting opportunity, and then of course, I got hooked. On 9/11, the war broke out, and families were really suffering with the challenges of deployment. It’s been what I've thought about most of the time since then.

American Legion Magazine: What is the mission of MFRI?

MacDermid Wadsworth: When we were first created, we were the research house for the Office of Military Community and Family Policy in the Department of Defense. So for our first five years, we studied whatever they felt like they needed us to study, and we did projects all over the world about a variety of issues. Once that initial funding ended, our mission has gotten broader. We've continued to have a research mission, but as our funding has come more from philanthropic sources, we've taken on more engagement and outreach responsibilities as well. I think of us as trying not only to generate important new knowledge about servicemembers, veterans and their families, but then also to try to put to work the knowledge that we and others have generated to try to find ways to make it easier for them to get the support they need.

American Legion Magazine: Describe a successful initiative that has helped veterans and their families.

MacDermid Wadsworth: We’ve been involved in creating and implementing the Star Behavioral Health Providers Program. It’s aimed at training community-based behavioral health providers to be better prepared to serve members of the military and veterans’ families. That's now been launched in nine states. In 2020, it will be expanding to the Northeast, and throughout the Midwest, because the National Guard Bureau also thinks it's an important innovation to try to make sure that National Guard members, and reservists can get access to people who have been trained about military-relevant issues. We're proud of that effort.

American Legion Magazine: What prompted the idea for Star?

MacDermid Wadsworth: At the beginning of the conflict, we had lots of community-based behavioral health folks who didn't know what a TBI was, or who couldn't understand if someone spoke to them about an MOS, or other aspects of military lingo. That was problematic because it makes it hard to establish rapport with a client or a member of a military or veteran family. We also were aware that war is an engine of innovation, even in the behavioral health space. So the clinical guidelines for the treatment of PTSD have been changing a lot because lots of research is getting done in the Departments of Defense and Veterans Affairs and they are approving new clinical guidelines for treatment. We wanted to make sure that community-based providers were learning about those things. We tried to figure out a way that we could create training, get providers to come to training, and then also to create a registry so that servicemembers, veterans and their families who want to find a trained provider are able to do that easily.

So we worked for quite a while to build the mechanisms for that, and launched in Indiana around 2011. Now we've trained over 11,000 providers in the states where we've launched, we've delivered over 110,000 hours of training. Star is really aimed at trying to build networks of trained providers to whom servicemembers and their families can be referred. So there are always ways to make it better, there are always ways to make it more impactful, but we're gratified to be able to work on this initiative, and to continue to try to make it better.

American Legion Magazine: Why is it so important, so critical, for MFRI to incorporate the whole family unit into the research, the programs, everything that you do?

MacDermid Wadsworth: Well, of course, I'm a family scientist, so I don't know if I could do anything different. I'm so aware that families are implicated in the military service of every person, whether that person is married or has children or not. When they have to leave for military duties and be away, it's very often family members who are taking care of their pets, or their apartments, or other things. When they're ill or injured, family members step up to care for them. When they make decisions about whether to stay in military service, family members, once again, are very much part of the consideration.

American Legion Magazine: Talk about your Reaching Rural Veterans Program, why it’s important and what you're trying to achieve.

MacDermid Wadsworth: We've worked in Indiana for a long time to help communities recognize the veterans in their midst and mobilize on their behalf. We've worked with cities and towns around the state to facilitate community mobilization groups, but we also were aware that there are veterans in rural areas, who tend to be underserved, even though their health tends not to be quite as good as folks in cities and towns. We wanted to reach out to veterans in those rural areas. So we thought about where people in rural areas would congregate, which led us to food pantries, and then we thought about food pantries attached to faith communities in rural areas. Food pantries were a great idea because they have resources that low resource veterans need, they have facilities, they have staff, they have volunteers. So if you can leverage food pantries, then you don't have to create a new office, you don't have to start from scratch. Faith communities have a very important role to play in providing social support and outreach to veterans, which helps to reduce social isolation, a huge risk factor for poor physical and mental health.

We did a one-year implementation, and have been working since to raise funds to do a second phase. We've talked with partners at the Legion about whether something like this could be a good project in local areas. American Legion posts are, of course, on the ground in lots of communities, and I know they have a real heart for veterans in their communities in outlying areas.

American Legion Magazine: Purdue University President Mitch Daniels is not a veteran, but he's an alumni of American Legion Boys Nation and Boys State. He also received the Legion’s Patriot Award last August. How supportive has he been of MFRI?

MacDermid Wadsworth: He has a real heart, as you know, for military folks. There have been many occasions when he has expressed his support for military and veteran families, and for our work. Every once in a while, he forwards to us a question that he's received, and wants our help in responding. He's been very supportive when we engage with folks on Capitol Hill, as well as in the state with the State Department of Veterans Affairs and others. We've been really grateful for his commitment to these issues over the years.

MacDermid Wadsworth: We certainly appreciate The American Legion’s awareness of us. When I spoke at the national membership meeting, I talked about one of our initiatives called Measuring Communities, which is aimed at helping local community organizations to learn about the veteran population in their area. We’re happy for posts to use it, and happy to provide training to help them learn how to use it. In return, we'd be grateful to know more about how they use it, and how it helps them in their work, and ways that we can make it more useful to them.

The American Legion Auxiliary has been very supportive of one of our initiatives called the Focus Forward Fellowship, which is aimed at women student veterans. The Auxiliary supported one of the students in the last class, and has expressed interest in supporting some students in the next class. We're grateful for that.

If we secure the resources to take Reaching Rural Veterans to the next stage of development, I think it's something that could potentially be useful for Legion posts as a way of helping to galvanize their community around the needs of low resource veterans in their areas, do something visible in their community and attract people to the post. But also just provide them with another option for a community activity that might do some good, and help their members expand their contributions to the community even further.

American Legion Magazine: As a grassroots organization, our members take pride in initiating projects that benefit their communities. At the local level, what can Legionnaires do to support these initiatives?

MacDermid Wadsworth: Post leaders are encouraged to reach out to us, and we can share ideas and materials with them. If there's someone who's really entrepreneurial who wants to try something in their local area, we can give them some ideas about things that they can do and we can try to help them do that. We certainly like it when people are influenced by the resources that we have on our website, and maybe it helps them think more about the families in their area.

If they use our Measuring Communities tool and it helps them in some way, let us know because that helps us then make the case to get more data that we can put in it, or get the resources that we need to sustain it.

American Legion Magazine: You've been at this for roughly 20 years. What's something that sticks out to you as something that you've learned along the way that you didn't expect?

MacDermid Wadsworth: I had no idea the depth of the calling that military people feel. I know there are lots of veterans who might have been drafted, and didn't necessarily feel that calling before they joined, but there are so many veterans who come through their service with such a deep commitment to the people that they served with, and to the ideals that military service holds. And veterans have a really special relationship with the flag. They have strong hearts for this country in ways that the rest of us can't fully appreciate, and they know what it means to take that oath.

I ended up feeling humbled by the idea that I can be sitting across the table with someone and know that that person pledged an oath to die for me if necessary. It's just almost embarrassing to be a citizen, and be with someone who has made that kind of commitment on behalf of the country. So when people thank me for something that we've done, I always say it's my honor to do the work.