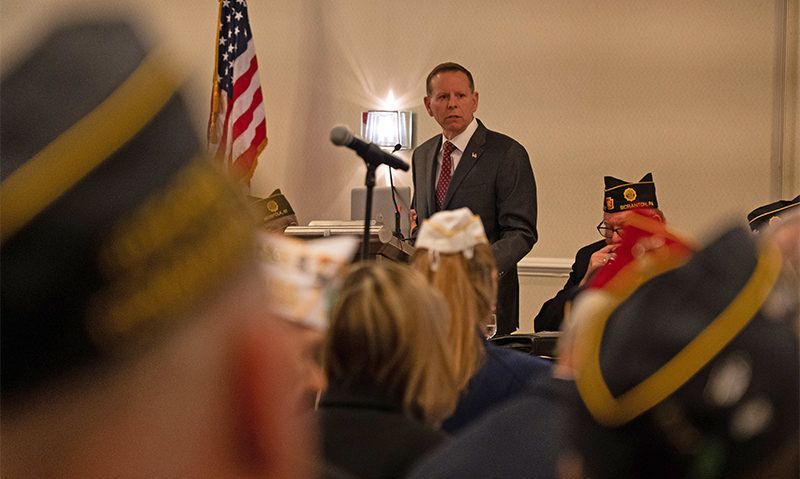 The transition from the military to civilian world can be difficult, with veterans sometimes running into hurdles as they seek out potential benefits, and look to further themselves either through training or education, or head directly into the workforce.

But a new Department of Veterans Affairs initiative is geared toward helping new veterans not fall through the cracks during that first year out of the military.

Through the Solid Start program, VA will contact veterans three times during the first year of their transition, with the initial contact coming within the first 90 days of separation from military service and then additional phone calls coming within six months and the final coming toward the end of the year.

“What we talked about here is establishing a relationship with VA,” Lawrence said. “They’ve just left the greatest team in the history of the world, the U.S. military, and the next day they wake up with no connectivity.”

Lawrence said the phone calls are driven by the veteran. “We ask them, ‘What do you need?’” he said. “I think this was designed with the understanding that maybe folks would ask for mental health resources. But actually, it’s been not. Of the 50,000 calls that we’ve connected with, most of them are asking about benefits. So often it’s ‘How do I get health care? How do I file a claim? How do I do things?’ So we talk to them, we answer their questions, and we follow up with an email.”

Lawrence asked Legionnaires to reach out to newly transitioning veterans to make sure they are aware of the program; those who have not been contacted within the first 90 days of their separation are urged to contact VA at (800) 827-1000 to get their information in the Solid Start program.

The problem has been fixed, Lawrence said, and student veterans are now being paid the proper housing allowance. “What we did is make sure everyone going to school in the spring of 2020 has the right housing allowance,” Lawrence said. “And we promise that since the law should have been implemented in August of 2018, later this spring we will re-compute everybody who’s gone to school this period of time … and if we owe you money, we will send you what we owe you. If we’ve overpaid you, you can keep it. We will not establish a debt.

“It’s just fair. We made the mistake. It’s not fair our veterans should pay.”

Virtual hearings allow veterans and their claim representatives to participate over the phone in an appeals hearing with a judge in D.C. “You can have that hearing in a virtual room,” Mason said. “It’s a protected room. To date, we’ve held over 250 of those in tests. Especially in the days we have right now with the coronavirus, this is something we’re seeing more asks for. You all have been asking for that before. We’re very happy that we’re very close to rolling it out. Probably it will happen later this year. We want to make sure it works and works well before we roll it out.”

Geo-matching allows VA to hold hearings for veterans in the state that’s closest to where they live. However, when the program was rolled out, “The technology could schedule the veteran for a hearing across the border, but it forgot to check the capacity for the regional office and the (veteran’s representative),” Mason said. “So we have backed that off a little bit. So in the areas where we can hold it and we are not putting too much on the regional office, or you all and your colleagues, we are holding those geo-matching. In a couple of the other areas, such as Tennessee, North Carolina and Georgia, we’re taking a step back and pausing that for a minute until we get all of our ducks in a row.”

Mason also shared an update on the board’s legacy appeals, which are claims for which VA provided notice of decision prior to implementation of the Veterans Appeals Improvement and Modernization Act of 2017 (AMA) and the claimant has not elected to participate in the AMA process.

“That’s where you all come in,” Mason said. “We need your help making sure that if the veteran is in the Legacy program that we’re getting those cases done for you. If you need to advance those cases on the docket due to illness or financial reasons, please let us know. We automatically advance on the docket for (ages) 75 and over.”

Bill Brassard, senior director of Communications for the National Shooting Sports Foundation, discussed a collaboration between his organization, the American Foundation for Suicide Prevention, and the Departments of Defense and Veterans Affairs to stem veteran suicide. Firearms retailers and shooting ranges are provided a toolkit that includes in-store signage aimed to educate veteran gun owners about suicide, warning signs, risk factors and the importance of securely storing firearms to help prevent access in times of distress.

A pilot program is taking place in six states and the District of Columbia. “If it works well, it will be rolled out nationally across the country,” said Brassard.

Randy Reeves, VA’s Under Secretary for Memorial Affairs, updated the commission on the Veterans Legacy Program (VLP), which commemorates the nation's veterans through the discovery and sharing of their stories. Through the program, students and teachers from kindergarten through college across the nation use the historical resources found within the National Cemetery Administration cemeteries. Those participating in the program research veterans interred in national cemeteries and develop educational tools that increase public awareness of veterans’ service and sacrifice.

Reeves said the VLP “is allowing us to be able to preserve those legacies and tell those stories of our veterans. I want to thank The American Legion for supporting our legislation … that was signed by the president not long ago that allows us to provide grants to colleges and universities … so they can participate in the Veterans Legacy Program.”