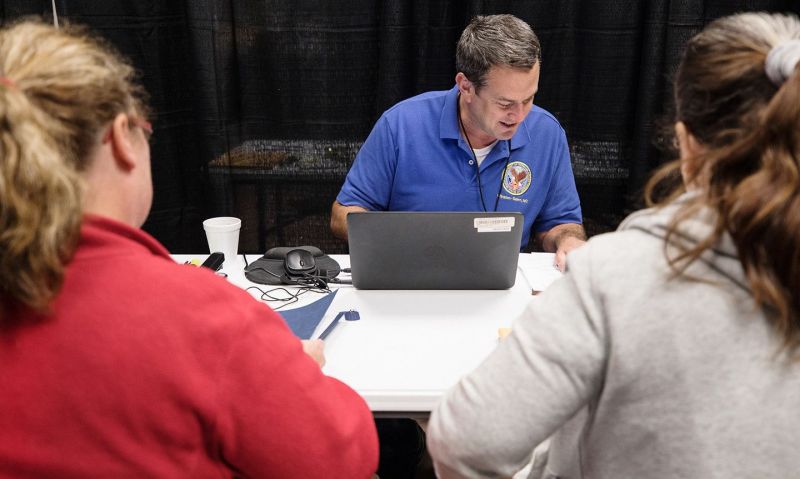 Dawson Rouse, ratings specialist with the Winston Salem Department of Veterans Affairs, North Carolina, helps two sisters who served in different branches of the military, with their claims during the North Carolina Veterans Experience Action Center event, which was being hosted at the Herbert Young Community Center, Cary, N.C., Sept. 14, 2017.

The American Legion’s Board of Veterans Appeals (BVA) unit responsible for assisting veterans with Department of Veterans Affairs (VA) claims surpassed its 2021 goal, zeroing out its allotment of backlogged legacy appeals pending for 125 days or longer. The unit began the year with more than 4,800 legacy appeals assigned.

After the 2017 act became law, VA began to phase out legacy appeals. The goal of the board is to make final decisions on all legacy appeals over the next few years, said Marty Callaghan, deputy director of Benefits and Claims Services for The American Legion. When the last legacy case has been decided, all veterans’ appeals will be processed within the AMA system.

“We came up with a formula where most of the effort of our board unit would be spent on these legacy appeals until we got them down to zero in our work queue,” said Callaghan. “Our 20 claims specialists chipped away at our legacy backlog while still working on AMA appeals throughout the year.”

The team achieved its goal of zeroing out legacy appeals by the first week of December 2021.

The elimination of the backlog helped get millions of dollars of benefits to veterans. Nearly 80% of the 99,721 decisions made by BVA in fiscal year 2021 were legacy appeals. Between legacy and AMA appeals, The American Legion’s board helped Legion-represented appellants receive more than $47 million in VA award grants in 2021.

BVA has an inventory of appeals that have American Legion power of attorney (POA), which are distributed on a near-daily basis to the Legion’s board.

“About 2,000 appeals with Legion POAs are currently in the board’s inventory,” said Callaghan. “As soon as the board places them in our work queue, we process them within a week and send them back to the board for a decision.”

Callaghan said the unit’s two team leaders, Dave Spivey in Washington, D.C., and Tony Cross in Indianapolis, worked closely together to bring the backlog down to zero – and keep it there. “We all knew the goal was to hit zero before year’s end. Dave and Tony worked together and with their teams to make that happen.”

The Indianapolis team works on about 200 appeals each week.

“Each appeal stands for a veteran and, being part of the Legion family and a representative with that power of attorney, it means you’re responsible for helping that veteran get their issues resolved through the Board of Veterans Appeals,” Cross said. “The significance is almost unbelievable. The accountability and the passion developed to clear out that backlog and work through this pandemic is an amazing achievement.”

Cross said that one of the most rewarding aspects in knowing how the unit is able to positively impact the lives of veterans.

“We have a small part in making a veteran’s life and their representation of being in the military a little bit better. The passion and the accountability of our team, many of them are disabled veterans themselves, and their job is to make sure they do everything they can to tell the story of a veteran’s service.”

Spivey said a key to the unit’s success is the relationship their claims specialists have with the board.

“Many of the legacy cases have been remanded and sent back for further information,” he said. “This can result in some of the legacy cases being dragged on for excessive amounts of time. When we say we make special efforts for legacy cases, and important reason for doing that is to be fair to veterans that have been waiting for a long time. The average legacy case was in process for over 2,000 days.”