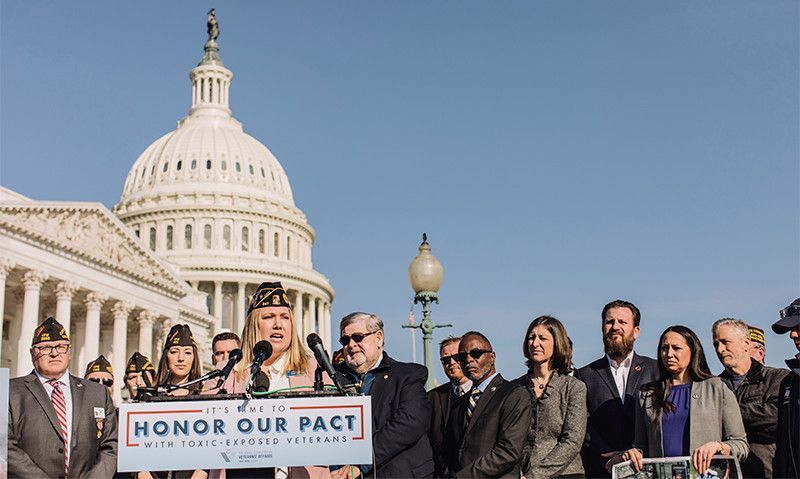 American Legion Veterans Affairs & Rehabilitation Director Katie Purswell speaks during a press conference hosted by House Committee on Veterans’ Affairs Chairman Mark Takano (D-Calif.) at the House Triangle in Washington, D.C, on March 2, 2022 to highlight the urgent need to pass the Honoring our Promise to Address Comprehensive Toxics Act of 2021 or Honoring our PACT Act on the House floor. Photo by Jason Andrew

(Note: The Honoring our Promise to Address Comprehensive Toxics Act of 2021 passed the House of Representatives on March 3)

It’s time to increase support to veterans linked to toxic exposure during their service, a contingent of American Legion members, congressional representatives and activists called for during a press conference March 2 at the Capitol.

Participants included Speaker of the House Nancy Pelosi, D-Calif.; Chairman of the House Committee on Veterans’ Affairs (HVAC) Mark Takano, D-Calif.; and Reps. Raul Ruiz, D-Calif., and Elaine Luria, D-Va.; activists such as Jon Stewart and other Veterans Service Organizations. They were united in advocating for support of the Honoring our Promise to Address Comprehensive Toxics Act of 2021 — also known as the Honoring Our PACT Act.

“Without hesitation, our veterans raised their right hand to protect and defend this nation and many are now sick as a result of that service,” Takano said. “We made a pact with these individuals. A pact, I am afraid to say, we have not yet honored.”

The bill would streamline access to health-care benefits for those who served in areas of known toxic exposure, regardless of disability status, and provide health care for potentially as many as 3.5 million veterans exposed to airborne hazards and burn pits. Additionally, the Honoring Our PACT Act would establish a presumption of service connection for over 23 respiratory illnesses and cancers.

“I struggle to think of a single person that I deployed with who may not have been exposed, at some point, to toxins while deployed,” Purswell said. “While it was our decision to raise our hands and fight our nation’s wars for those who cannot or will not, what we didn’t know was that our long-lasting health issues might not even begin to show during our time in service.”

Purswell said The American Legion is encouraging Congress to pass the PACT act.

“From burn pits to black goo; in areas from Balad to Kandahar, the extent of the damage done to us will not be known for decades to come,” Purswell said. “The American Legion will not stand idly by and allow the delay of health care for our nation’s veterans to happen again. We cannot wait decades for this generation of war fighters. We must learn from our mistakes and act now.”

“Last night, they were seen,” he said, referring to President Biden’s State of the Union address. “The president of the United States saw their struggle. The learning curve in this country for how we treat our veterans when they come home from war is so painfully slow. The pace is unacceptable, and you feel it today. I have been waiting for this day for them.”

It’s an issue that affects veterans from deployments throughout the world.

“Veterans from Iraq, Afghanistan, Vietnam, Djibouti, Guam and all over the world are trying to get the government to recognize that the true cost of war is the consequence of their service and sacrifice when they get home,” added Stewart.

Danielle Robinson, one of the president’s guests at the State of the Union, was also present on Capitol Hill. She is the widow of Army National Guard Sgt. Heath Robinson, who after deploying to Kosovo and Iraq as a combat medic with the Ohio National Guard, was diagnosed with a rare autoimmune disorder and stage 4 lung cancer. He died in May 2020, leaving behind his wife and daughter, Brielle.

As Robison was getting ready for Tuesday’s State of the Union, she received a call from the memorial company that laid her husband’s headstone.

“They told me his headstone was placed yesterday. The same day that I would be coming to Washington to honor him and honor all these veterans who have been suffering for so long,” she said. “If that isn’t a sign, then I don’t know what is.”

The legislation has the support of 42 VSOs and more than 100 co-sponsors in Congress. American Legion National Commander Paul E. Dillard reaffirmed The American Legion’s support of the Honoring our PACT Act to Takano, saying urgent action is needed when it comes to providing veterans access to the necessary health care.

“Veterans exposed to toxic burn pits have waited far too long for the presumption of service connection to be established,” said Dillard. “This is why the American Legion supports H.R. 3967 – the Honoring our PACT Act of 2021 which provides a comprehensive framework to improve the presumptive process for burn pit veterans. Urgent action is needed to ensure that veterans have access to the care they need and have earned.”

Pelosi called the legislation a “cost of war that we should recognize when we go [to war].”

Ruiz, who is an emergency room physician, said delaying the passage of this critical legislation would mean a delay while more veterans die.

“It is the heart and soul of this legislation to get burn pit exposed veterans the care they have earned and deserve because that is our promise to take care of our veterans by establishing a presumption of service connection between their health and toxic exposures,” he said.