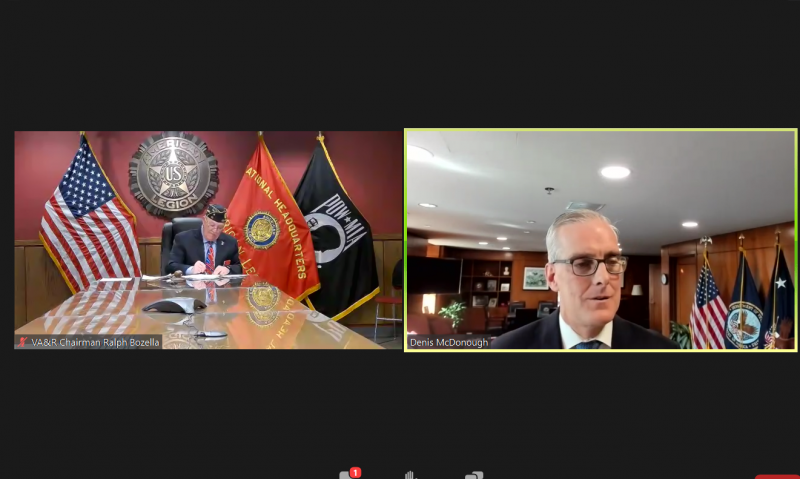 Among those was Assistant Under Secretary for Health Dr. Carolyn Clancy, who spoke about care for veterans in rural areas, how the pandemic has affected health-care delivery for veterans and other areas of interest to the Legion.

And following her presentation, another area of interest for The American Legion – VA’s first step in an implementation of a shared Department of Defense-VA electronic records system – was discussed.

American Legion Past National Commander Dave Rehbein brought up the situation occurring last week at the Mann-Grandstaff VA Medical Center in Spokane, Wash. VA has confirmed that computer system outage led to corrupted patient data, causing the facility and clinics across the Inland Northwest to stop admitting patients a day earlier; employees said problems with patient records persisted throughout the day. The outage forced VA to take the Cerner Corp.-developed system down from about 10:30 a.m. local time Thursday until about 7 a.m. Friday.

Clancy said she was aware of the issue and that it was on its way to being corrected. “I will tell you that having a new Assistant Secretary for Information Technology (Kurt DelBene) that comes out of Microsoft has been a boon,” she said. “Almost immediately after (the Spokane issue) happened, he said this was really, really not a stellar performance on the part of the vendor.

“When I was serving as acting deputy secretary for the first half of 2021, I led a strategic review of where we were. We talked to people across the country, in terms of the challenges of implementing electronic records, and they all said it is always, always horrible. I know the (Department of Defense’s) did not go so smoothly, and then they turned the corner. And instead of doing deployments one site at a time, they now go six, eight or 10. So I’m quite confident that we will get to that. But to say we’re keeping a close eye on it is an understatement.”

VA&R Commission Chairman Ralph Bozella said that he and VA&R Director Katie Purswell have a meeting scheduled for this week with Cerner representatives. “We have a lot of questions about the same thing,” he said. “It’s still problematic, to say the least.”

In addition to Clancy, VA Secretary Denis McDonough spent more than 30 minutes speaking to the commission. He said the difficulties the coronavirus pandemic brought on the nation and world created a “moment when veterans, families, caregivers and survivors need us the most. And at VA, with your help and guidance, we’ve risen to that challenge.”

“And (the National Cemetery Administration’s) workforce made sure that there were no interruptions of memorial services for vets, their families (and) survivors, despite the fact that nearly 200 NCA employees – that’s almost 10 percent of the NCA workforce – being out at one time or another because of COVID. That’s just the tip of the iceberg. Altogether, with you as our partners, we’re now providing more care, more services and more benefits to more veterans than at any time in VA history. But make no more mistake, we’re not stopping. We still can, and frankly must, do better.”

McDonough reviewed seven shared priorities and how VA and its community partners can successfully take on those priorities, including what he said is VA’s top goal: ensuring that every veteran, no matter where he or she lives, “will have access to world-class care when they need it. When they need it. That’s our No. 1 goal today and every day.”

He also said VA’s No. 1 clinical priority is preventing veteran suicides. “A couple things stand out to me from our most recent report on veteran suicide,” McDonough said. “More than 6,000 veterans died by suicide in 2019, the most recent year for which we had data. The fact that we wait more than two years for data is an outrage.”

McDonough said that number of suicides “is far, far, far too high. Too many heroes lost. Too many hearts broken. Too many families left without their loved ones. But … that number reminds me that preventing veteran suicide is possible, because it’s 399 fewer veterans lost than the year before – the biggest improvement in 20 years. We need to build on that momentum together.”

Frueh said the pandemic “affects everyone globally. But it really changed the way that we connect veterans with the benefits they’ve earned. We’ve overcome a lot of challenges, and in many ways we’ve actually gotten better in the last couple of years. In fact, we’ve set records year after year. This past year, FY 2021 … we had delivered more than $110 billion in comp to veterans. And that is more than we’ve ever done before.

“We had decided more than 1.7 million claims, which is more than we’d ever done. We’ve helped 1 million veterans and beneficiaries go to school through the GI Bill, and paid over $12 billion in school and housing and books and other related expenses. We guaranteed a record 1.4 million (home) loans. In fact, VA guarantees more than 10 percent of the outstanding loans in the entire U.S. mortgage market, which is a $10 trillion market. It’s incredible, and we love that. I’m glad to be a part of it.”

Quinn said one of his top objectives is to modernize NCA’s IT capabilities. “While this may seem like an internal goal, it really is much more than that,” he said. “Our IT capabilities are critical to our ability to memorialize veterans, and to interact with the states and members of the general public. For example, the Burial Options Support System, or BOSS, we use is also used by 93 of the 119 cemeteries funded by VA grants. Currently, NCA is modernizing for those states that are using it. We are engaging our state partners through our Veterans Cemetery Grant Program staff over the next few years to make this a smooth transition.”