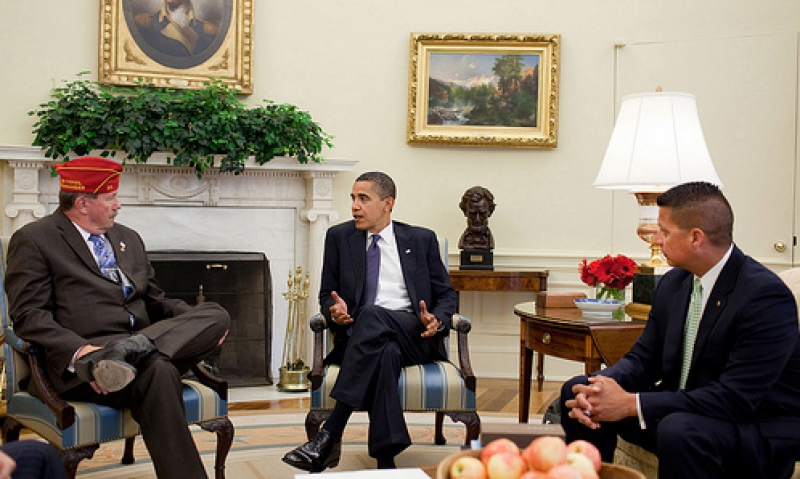 President Barack Obama, meeting privately with American Legion National Commander David K. Rehbein on Aug. 4, pledged to keep the VA medical system essentially as is - quelling fears that it would be absorbed into a national health-care system.

"(I) got his very strong assurance that the VA, as our veterans know it, will continue to exist," Rehbein said. "It will not be diluted or folded into some sort of national system, and that the folks who go to VA - that will be considered their insurance, so any insurance requirements (will be met) simply by being enrolled in VA."

Another topic discussed during the one-on-one Oval Office meeting was Medicare reimbursement to VA, a proposal long-championed by The American Legion. This would require Medicare to pay for care provided at VA medical facilities to Medicare beneficiaries - that is, eligible veterans older than 65 with non-service related injuries, illnesses and conditions. Currently, Medicare is precluded by statute from doing so.

"Medicare reimbursement to VA would be a boon to veterans in that it would encourage them to take advantage of what we consider the best care anywhere," Rehbein said. "It would also generate much-needed revenue for VA."

In fact, the Medicare VA Reimbursement Act of 2009 (H.R. 3365) now being considered in Congress resulted from a discussion Rehbein had with House Veterans Affairs Committee Chairman Bob Filner, D-Calif., at the Legion's Washington headquarters just three weeks ago. "I am pleased that Chairman Filner visited with us and then took prompt action," Rehbein said.

Obama and Rehbein also discussed the enhanced education benefits of the newly enacted Post 9/11 GI Bill, and the positive effects they're expected to have on the veterans community and the nation as a whole. The American Legion authored the original 1944 GI Bill, and worked closely with Congress in getting the new GI Bill written and passed.

Finally, Obama and Rehbein discussed the dramatically growing backlog of VA benefits claims. Rehbein said he feels the president "fully appreciates" the gravity of the situation and said he'll do what he can to aid in a solution.

Rehbein characterized the 25-minute White House chat as "very friendly â€¦ conversational in style," where "issues were discussed rather than positions being presented."