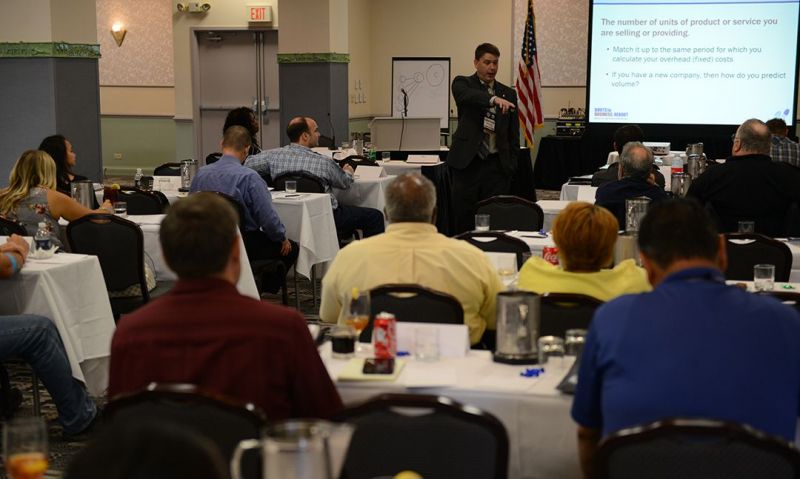 William "Joey" Pocan teaches a Boots to Business class at the Hilton in Cincinnati, Ohio on Monday, August 29, 2016. Photo by Clay Lomneth / The American Legion.

Davy Leghorn, assistant director of The American Legion's National Veterans Employment and Education Division, testified before the House Subcommittee on Economic Growth, Tax, and Capital Access. Leghorn’s testimony focused on exploring the challenges and opportunities faced by underserved businesses in the 21st century.

Veteran-owned small businesses (VOSB’s) employ over 5 million people, manage receipts in excess of $1.14 trillion, and account for nearly 10 percent of small businesses in the United States. VOSB’s continue to face challenges when it comes to securing government contracts and often need to surmount bureaucratic obstacles to obtain them.

“One detriment to the ‘veteran small business industrial base’ has always been the misinterpretation of legislation that designated SDVOSBs (service-disabled veteran-owned small businesses) as a preferred contracting group,” Leghorn said during his testimony. “Congress gave the SBA and other agencies broad business development authority to help veterans. Unfortunately, the SBA and the FAR Council announced in 2005 rulemaking comments that the government-wide SDVOSB Program was for established businesses and was not meant to aid in development for new businesses.”

The 2016 Supreme Court decision in Kingdomware Tech. Inc. v. United States affirmed that the intent of the SDVOSB set-aside goal defined in the Veterans Entrepreneurship and Small Business Development Act of 1999 was not only to fill a quota. It was, however, designed to encourage small businesses and create opportunities for service-disabled veterans.

“The American Legion had hoped that the outcome of Kingdomware would force SBA and the FAR Council to revisit the rules of the Veterans Entrepreneurship and Small Business Development Act,” Leghorn said. “This has not occurred. To this end, The American Legion asks Congress to encourage SBA and the FAR Council to carry out their business development authority.

“Further, the Kingdomware decision also signaled the Supreme Court’s approval for a model of 'Veterans First' or 'Service-Disabled Veterans-First' to exist in contract set-asides and preference programs. Congress can now extend this model government-wide in a Small Business Act or in agency-specific legislation.”

The American Legion also testified on the Boots to Business (B2B) course that is taught as part of the military’s Transition Assistance Program (TAP). B2B has been successful since its implementation in 2012.

“In the 2019 National Defense Authorization Act, there was an attempt to make at least one of the TAP capstone courses mandatory,” Leghorn said. “The American Legion supports this effort and hopes this will expose more servicemembers to the Small Business Administration’s (SBA) services and their grantees.”

The American Legion believes more servicemembers should have access to SBA programs and the creation of more Veterans Business Outreach Centers (VBOCs).

“Currently, National Guard and Reservists are not eligible for veteran entrepreneurship and loan programs until after they are activated under Title 10,” Leghorn concluded. “This is why The American Legion supports legislation that would amend 15 USC to extend eligibility for military-focused SBA programs to servicemembers who have been ordered to perform active service for more than 30 consecutive days.”