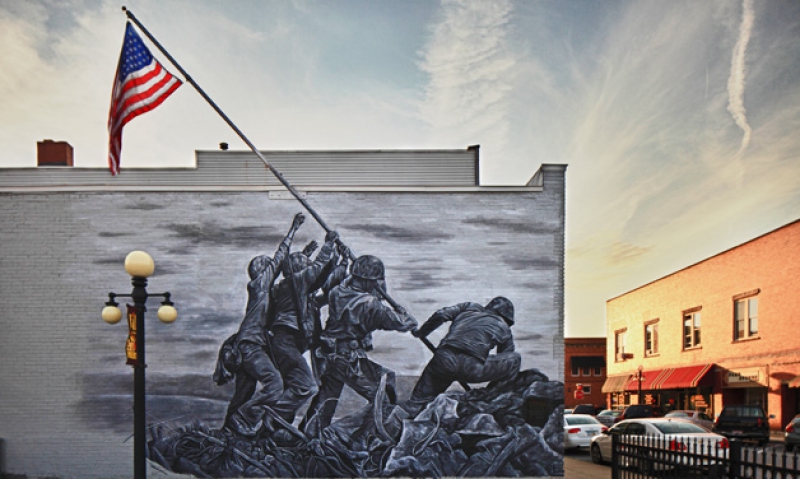 An outside wall of a two-story brick building in downtown Amherst, Ohio, was a blank canvas until local artist Mike Sekletar came into the picture. The Sons of The American Legion member wanted to use his skills and talents to pay tribute to all veterans, and decided to do so by creating a mural of an iconic photograph — “Raising the Flag on Iwo Jima.”

“I wanted to give back to veterans, and for me that’s through art and painting,” Sekletar said. “The (Iwo Jima) photo is so iconic. Everyone has seen it, and it signifies something different for everyone. For me, it signifies freedom.”

The mural began in August immediately after Sekletar received approval from the city and was given wall space from attorney Frank J. Janik III., owner of the downtown office building. Once the space was secured, Sekletar and friend Ryan Shannon stood on scaffolding and began painting the 20-foot by 35-foot re-creation of the Iwo Jima flag raising. The process took nearly three months and more than 250 hours.

The two artists first prepped the side of the building by painting it a light gray and then used an overhead projector during the evening hours to outline the five Marines and Navy corpsmen. Once the outlining was complete, the mural started coming to life as Sekletar and Shannon shaded in the figures with three dramatic colors — gray, black and white.

However, after taking a closer look at the building’s structure and the intricate details of the mural, Sekletar envisioned color through a symbol. “I thought a real flag at the top of the building would just set the mural off.” A 5-by-8-foot flag featuring 48 stars now flows from a 14-foot aluminum flag pole that extends from the building’s roof line.

“We have a 48-star flag in order to stay true to the photo; the details are just there,” Sekletar said. “Now, the only color in the mural is the flag because that’s what the photo is about — the American flag lives and carries on.”

Sekletar’s SAL Post 118 donated four flags, including the one currently attached to the pole; the others are backups. And since Sekletar personally financed the mural, additional support came from a few private donations and from passersby who put money in a plastic tip jar that was attached by rope to the scaffolding. The local Sherwin Williams store also donated the paint and brushes used.

“Everyone in the town, especially my post and my father (a Vietnam War veteran), have really been amazing and supportive of the project,” Sekletar said. “When Ryan and I were outside painting, people stopped by and thanked us for what we were doing. But I would say, ‘No thank you! This is for you and for everyone that has served.’  I even met a handful of World War II veterans that came into town to see us working on the mural. It’s just been a very gratifying and amazing experience.”

Meanwhile, a granite plaque is featured on the far right of the mural that reads, “We will never forget the courage, honor and sacrifice of the men and women who served our country for our freedom.” And in effort to maintain the one-of-a-kind mural, Sekletar hopes to raise funds by selling personalized paving stones that will be set in front of the mural.

“People ask me if I’ll paint another mural like this, and I say maybe on a smaller scale because I want this one to be the only one like it; I want it to be one-of-a-kind,” Sekletar said. “I really feel privileged and honored to be able to do something like this for our veterans.”

Click here to view more photos of the mural.