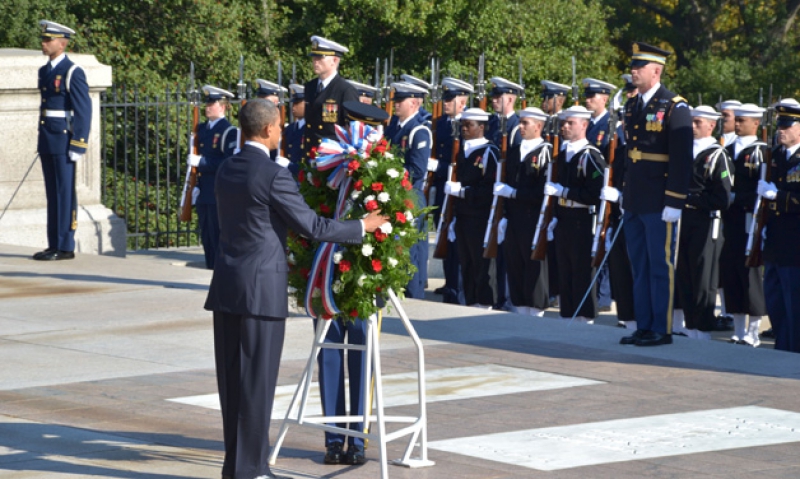 President Barack Obama told a Veterans Day crowd that “no one who fights for this country overseas should ever have to fight for a job, or a roof over their head, or the care that they have earned when they come home. We know the most urgent task many of you face is finding a new way to serve. That’s why we’ve made it a priority to help you find jobs worthy of your incredible skills and talents.”

The American Legion has been working with the Obama administration, Congress and federal agencies on programs and strategies to provide more jobs for unemployed veterans – especially those returning from Iraq and Afghanistan.

The president spoke during a ceremony at the amphitheater of Arlington National Cemetery, introduced by Department of Veterans Affairs Secretary Eric Shinseki. Earlier, the president placed a wreath at the Tomb of the Unknowns.

American Legion National Commander James Koutz attended a White House breakfast hosted by the president and First Lady Michelle Obama, and represented the Legion at the Arlington ceremony. Koutz also is a member of the president’s Veterans Day National Committee.

Telling the crowd that private businesses have hired or trained about 125,000 veterans and military spouses, he said “because (veterans and servicemembers) deserve to share in the opportunities you defend, we are making sure that the Post-9/11 GI Bill stays strong, so you can earn a college education and pursue your dreams.”

Obama pledged to continue to focus on reducing VA’s disability claims backlog. “No veteran should have to wait months or years for the benefits that you’ve earned.... We will not let up," he said. "And as we mark the 50th anniversary of the Vietnam War, we have secured new disability benefits for Vietnam-era veterans exposed to Agent Orange. You needed it, you fought for it, and we got it done.”

The president shared a story about a U.S. Navy petty officer, Taylor Morris, who lost all four of his limbs as the result of an IED blast while on patrol in Afghanistan. “Now, Taylor’s recovery has been long," said Obama, who presented Morris with the Purple Heart last July. "And it has been arduous. And it’s captivated the nation. Taylor couldn’t make it here today because he and (girlfriend) Danielle are out kayaking.” The crowd responded with laughter and applause.

“When times are tough, we come together,” Obama said. “When one of us falters, we lift them up. In this country, we take care of our own -- especially our veterans who have served so bravely and sacrificed so selflessly in our name.”

After the ceremony, the president, his wife, Vice President Joe Biden and his wife Jill went to the cemetery’s Section 60 to greet families who were gathered there; that section is the final resting place of many servicemembers killed in Iraq and Afghanistan.