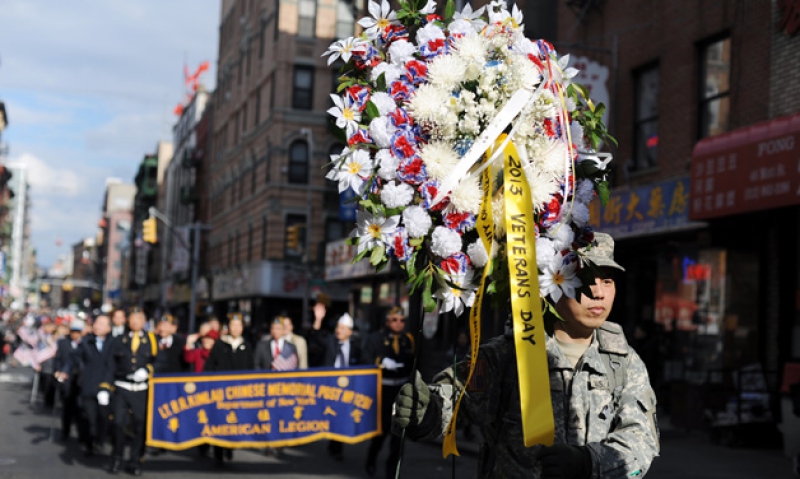 The largest Chinese-American Legion post in the nation celebrated its 50-year Veterans Day tradition on Sunday with a parade. Legion family members of Lt. B.R. Kimlau Chinese Memorial Post 1291 in lower Manhattan, N.Y., marched several blocks through Chinatown to Kimlau Memorial Square for a special ceremony that honored the services and sacrifices of Chinese-American veterans.

Post 1291’s color guard led the parade three blocks through the crowded street of Mott, where locals and tourists stopped to applaud and wave American flags as the Legionnaires, Sons of The American Legion and Auxiliary members marched by.

For David Louie, a member of Post 1291’s color guard for nearly 30 years, the parade is a time for him to celebrate the sacrifices of Chinese-American men and women who answered the call to serve their country.

“I grew up after the Korean War, and there was a lot of negative sentiment toward Asians, confusing them with Japanese,” Louie said. “So when I march in the parade, it’s because I want my fellow Chinese and Asians to know that we are just as much of an important part of this country as any other ethnic group. We knew our duty was to serve the country and many of us did serve as much as any other group. We did our part, and we continue to do our part.”

Once the Legion family members arrived to Kimlau Square, they gathered around a memorial arch that was built by Post 1291 and bears the inscription – in both English and Chinese – “In Memory of the Americans of Chinese Ancestry who lost their Lives in Defense of Freedom and Democracy.” There, the color guard presented colors, the Pledge of Allegiance was recited, “God Bless America” was sung and Post 1291 Commander Mimi Wang expressed to the crowd why the parade’s tradition is important to continue.

“Our tradition shows the public that we thank all our veterans, past, current and the future,” Wang said. “It’s very important to have this ceremony to remind the young people that freedom doesn’t come free because those men and women sacrificed their own professional lives and careers to protect us so we can enjoy freedom. We need to thank them and show our respect.”
The brief ceremony ended with the laying of two wreaths at the base of the memorial arch, followed by a 21-gun salute and the playing of “Taps.”

“Veterans Day is a day where we stop and think about the sacrifices, the hardships endured by generations of great warriors for their service to our nation to keep us safe, to keep us strong,” said American Legion Past National Commander Fang Wong, a member of Post 1291. “Everyone says that Veterans Day is a special day, but in essence, why should only this day be special. Past National Commander Jim Koutz said last year that every day should be Veterans Day. We should not stop thinking about the sacrifice put out by the veterans. We shouldn’t just take one day and say ‘thank you.’ It should be 365 days to remember them of their service, of their sacrifice.”