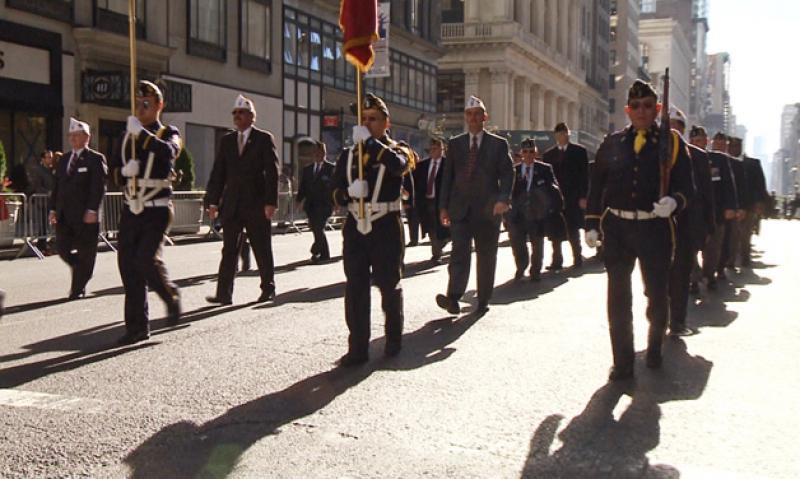 American Legion members and their families are encouraged to march in the nation’s largest Veterans Day parade, held in New York City.

“It’s been an extremely positive experience,” said 9-11 Memorial Post 2001 Commander Sean Powers, who has marched in the parade previously. “It’s a day for us to honor our active-duty servicemembers. We’re going to have a lot of active-duty servicemen and women there. And it’s our day to honor them. We are the largest veterans organization and this is our chance to demonstrate our strength in numbers.”

America’s Parade will start at 11:11 a.m. Nov. 11, and conclude around 3:30 p.m. The 1.3-mile route goes up Fifth Avenue from 26th Street to 52nd Street. “The ceremony starts late enough in the day and ends early enough so people will be able to make a day trip out of it, using the city’s mass transit system,” Powers said.

Hundreds of veterans — including former crew members of the Intrepid — are expected to attend the event at the museum, located at Pier 86 (46th Street and 12th Avenue) in Manhattan. The tribute will include the presentation of the national colors and the annual commemorative wreath-laying in the Hudson River.

Museum entrance is free to all veterans on Veterans Day.

Last year, about 80 Legionnaires from New York, New Jersey, Connecticut, California and even Ireland marched in the parade.

“We talk a lot about veterans serving veterans. This event is all about veterans honoring veterans,” Powers said. “That is one of the things I got the biggest kick out of last year. There were guys from World War II marching side by side with guys and gals still serving. It’s neat to see the age difference and different generations marching as brothers and sisters.”

For those not able to attend the parade, it will be broadcast in the nation's top television markets. On Nov. 11, Fox 5 in New York City will televise the event from noon until 3 p.m. Viewers may also watch in on a livestream by going here.

Other cities will be able to watch highlights of the parade on Nov. 16 (all times are local):

For more information about participating in the parade, email: parade@americanlegion.com