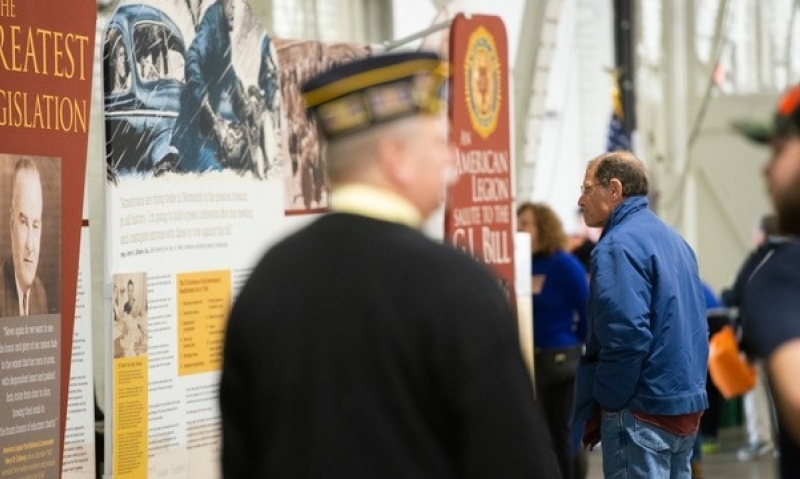 New York State Assemblyman William Magnarelli was disappointed about 11 years ago when he attended a Veterans Day memorial service and parade in his Syracuse district of the state Legislature. He found interest and participation to be sorely lacking.

“There was supposed to be a parade following the memorial service,” he recalled. “I walked outside, and there was a trolley with about six fellas in it. That was the parade. That was it. I said, ‘This won’t do.’ So, I went back to my office and started making phone calls. Once I started asking, it was just, ‘Yes, yes, yes.’ Right down the line.”

Saturday, during the 2018 CNY Veterans Expo and Parade at the New York State Fairgrounds in Syracuse, his disappointment had clearly been erased. Thousands of veterans and their families from throughout north central New York poured into an event featuring more than 100 exhibitors, a live band, children’s activities, food, vintage military uniforms, posters, vehicles, weapons and more.

The American Legion Family was well represented among the exhibitors, promoting programs and inviting new membership.

“It’s a great thing that we are here, representing 100 years of The American Legion,” said Andy Bender, commander of Onondaga County, which includes 20 American Legion posts in the Syracuse area.

“A tremendous amount of resources are available here that the average person doesn’t even know about,” Gibbs observed. “As you go up to the tables you see places where you can connect. I think it’s just a giant, good resource pool for people.”

The event featured booths and exhibits from a variety of organizations, including the American Red Cross, the Marine Corps League, Daughters of the American Revolution, Syracuse University, Disabled American Veterans, Fort Drum Retirees, Veterans of Foreign Wars, the Syracuse VA Vet Center and dozens of others.

Visitors viewed two of The American Legion’s centennial exhibits – the “Greatest Legislation: An American Legion Salute to the GI Bill” and “For God and Country,” a 160-foot chronology illustrating just a fraction of the organization’s accomplishments over the last century.

“For those who don’t realize it’s been 100 years, it’s clearly an awakening,” Gibbs said of the exhibits. “This is a big deal, and people are really engaged.”

Nessler said the CNY Expo gives all veteran-supporting groups in the area a chance to get together and share information about their work. “I think it’s a great service for the veterans, the community and everyone involved,” she said. “They just bond together. It’s all the veterans service organizations working together.”

The event benefited from positive media coverage. “A lot of energy,” Nessler said. “The PR that they do on this is just totally amazing – the support they get from radio, television and the newspaper – just to advertise it – is great.”

Expo coordinator Diana Abdella says the event has grown substantially over the last decade, drawing media attention and the kind of participation Magnarelli wanted to see in his district for Veterans Day.

“This is definitely a community,” Abdella said. “There are so many organizations in the community that serve veterans and serve their families. This is an opportunity for them to meet and to talk about their needs, and what they can do to get help in the community.”

“The whole idea here is to honor our vets and have the community come out and say thank you,” Magnarelli said. “That’s what the whole ballgame is… that’s what we’re trying to do. And I find that we get a very good response. Everybody comes together, and they have a good time.”

Among the veterans taking in the CNY Expo was Sarah Stenuf, an American Legion Auxiliary Girls State alum and Army combat veteran who also is a three-year member of The American Legion. An Apache crew chief in the Army, she deployed for a year to Afghanistan where she suffered a traumatic brain injury and has battled post-traumatic stress disorder.

Stenuf said she is especially appreciative of The American Legion’s efforts to raise awareness and acceptance of alternative treatments for PTSD and integrative care that considers families and caregivers. After she got out of the Army, she explained, “PTSD controlled my life. I started out with two pills and ended up at 16 – not knowing how I got there. It became unmanageable and out of control. I just needed to stop and tell people what was going and ask for help.”

She turned to local veterans organizations that had stayed connected with her during her service years. “These guys in The American Legion were there 100 percent for me, before I joined, when I was in – they were sending me care packages – and after I got back, they were checking on me.”

She said The American Legion helped her find new purposes “and other options outside of VA and traditional methods of health care” after discharge. She found that volunteer activity and assisting other veterans was a route to relief that no pills could offer.

Today, she says she looks forward to finding ways to continue bridging gaps between older Legionnaires and those of her era so they can all be there for veterans yet to serve. “We need to embrace our differences. I feel that’s a gap we need to close if the Legion is going to retain members for future generations, especially younger ones.”

If Magnarelli has it his way, the CNY Expo will continue to build bridges, elevate awareness of services and give the people of his district a massive opportunity each Veterans Day weekend to say thank you to all who have served, regardless their era.