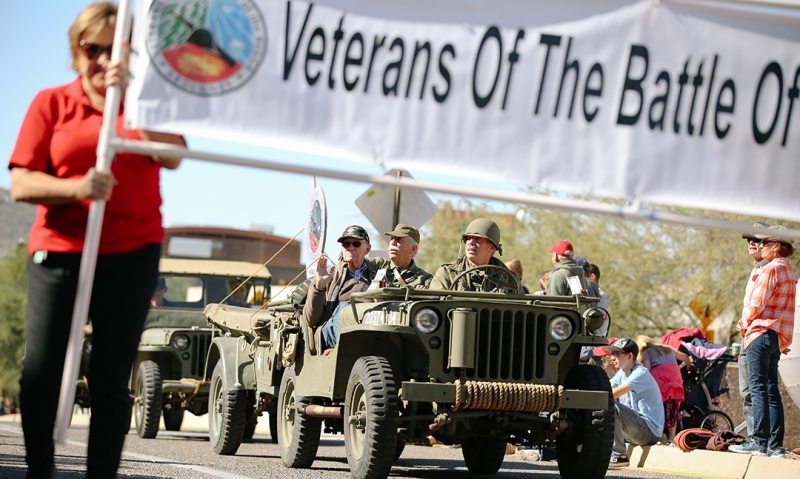 Prior to Monday’s Tucson Veterans Day Parade, 17 Army recruits were sworn in at the parade’s grandstand, a new ceremony for one of the city’s esteemed traditions.

“What a tribute to those who served before,” Morgan McDermott American Legion Post 7 Commander Kristin Hinson said of the swearing-in ceremony.

The parade is sponsored annually by Post 7, Tucson’s oldest Legion post, which is named for a World War I veteran who died Oct. 29, 1918, from wounds suffered in combat a few days earlier. This year’s parade took place Monday because that was the recognized Veterans Day holiday for government offices, Hinson said.

She acknowledged that “there’s some measure of tradition” when it comes to commemorating Veterans Day with a parade each year in the city.

“You know, a concert’s not necessarily everyone’s cup of tea. I might like country or rock n roll or whatever and you might not. But you know what, who on God’s green earth doesn’t love a parade. This is fanfare, this is a chance for people to get involved and to be part of a show and to help assist the rest of the community to celebrate our veterans and celebrate our service and celebrate our freedom."

That was reflected in the number of Legion Family members participating in the parade itself, helping organize and coordinate the parade entries and other aspects of the day, and serving up burgers and hot dogs to the public at Post 7 after the parade.

“Having been in the Army myself, I was a sergeant, I served for a few years during the second Gulf War era, I traveled a lot … you pick up and you move to the next duty station, you don’t know anybody, and by golly, if you don’t know how to make friends, you’re going to be eating lunch by yourself for a lot of days,” Hinson said. “So the fact that we have this family that’s come together through The American Legion, people from all different backgrounds, all different services, who have that common bond and have similar interests … you have a sense of belonging.”

And the opportunity to recognize those who served was evident throughout the day.

“We need to remember these veterans not only on Veterans Day, but every day,” said Ben Buehler-Garcia, one of the parade announcers and the host of a local radio show, American Warrior Radio.

This year’s parade included 101 entries, as well as dozens of Legion Riders and other motorcyclists who kicked off the parade Rolling Thunder-style. The University of Arizona’s Air Force ROTC unit and JROTC units from local high schools also marched in the parade.

“It’s a tradition; thank God it still continues to this day, and I hope it will continue for years to come,” said Department of Arizona Commander Steve Aguirre.