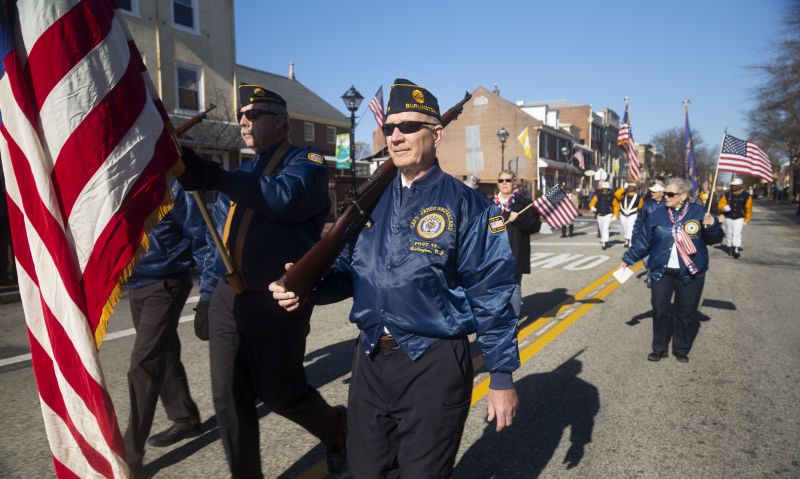 American Legion posts, districts and departments across the nation will once again take the lead in ensuring Veterans Day observances take part in their communities and states.

While many of the events take place Nov. 11, some happen over the weekend. Many Legion Family members will take part in traditional events, such as parades and ceremonies – some Legion posts will commemorate the Legion’s 100th birthday during these events – while others will be taking a different approach.

American Legion National Commander Bill Oxford will participate in the National Veterans Day Parade in Birmingham, Ala., which has taken place since 1947. The first celebration using the term Veterans Day occurred in Birmingham in 1947. Raymond Weeks, a World War II veteran, organized “National Veterans Day,” which included a parade and other festivities, to honor all veterans. The event was held on Nov. 11, at the time designated Armistice Day. In 1954, President Eisenhower signed legislation establishing November 11 as Veterans Day.

In Prince George’s County, Md., American Legion members will hold the annual Veterans Day ceremony at the Bladensburg World War I Veterans Memorial, thanks to this summer’s U.S. Supreme Court victory. Justices ruled for The American Legion that the 40-foot, cross-shaped memorial did not violate the First Amendment. The victory will bring “a sense of relief. It will be a sense of relief for veterans here in Maryland and all over the United States,” said Phillip Holdcraft of Post 131 in Colmar Manor, Md., who will preside over the ceremony.

American Legion Post 179 in Walker, Mich., will hold its fourth annual Veterans Day Student Education Program for local fourth and fifth graders. The educational event provides students an opportunity to learn about military history through re-enactors, who are members of the Legion Family. This year, students will meet and learn about Rosie the Riveter, Sgt. Reckless (a decorated war horse) and Moina Michael (Poppy Lady). And the Michigan Vietnam Memorial Wall will be displayed at the post for students to visit and learn about the war.

At Weehawken American Legion Post 18 in New Jersey, post members are conducting their own brand of “Buddy Checks.” The Legionnaires, many of them post-9/11 veterans, will be visiting older members of the post – many of who haven’t attended recent post events – to check on their well-being and remind them that The American Legion still is there for them.

At the National Veterans Memorial and Museum in Columbus, Ohio, The American Legion’s impact on generations of veterans will be on full display during the museum’s Veterans Day events. “The Greatest Legislation: An American Salute to the GI Bill” is this month’s special exhibit and will be on display until Dec. 1. The exhibit is free with general admission.

And Nov. 8-10 in Pall Mall, Tenn., Alvin C. York State Historic Park is offering visitors a chance to see World War I soldiers, weapon demonstrations and other programs that show the reality of combat during World War I. Click here for more information. York was a charter member of The American Legion, attending an organizational meeting in Paris in 1919, and helping found Mark Twain Post 137 in Jamestown, Tenn.

The following are just a few events American Legion posts will be involved with starting this weekend in honor of Veterans Day. Legion posts, districts and departments are enouraged to share stories and photos of their Veterans Day activities at www.legiontown.org.

• Vail Post 109 will host a Veterans Day service that will include a guest speaker and the honor guard from Davis-Monthan Air Force Base. Meanwhile, American Legion Riders from Chapter 109 will be heading north and south on Veterans Day. One group will head to Post MX15 in Puerto Penasco, Mexico, for the post’s event, while another group from ALR Chapter 109 is riding in the riding in the Tucson Veterans Day Parade hosted by Post 7 in Tucson. The parade, now in its 100th year, is the longest running American Legion-ran parade in the nation. American Legion National Judge Advocate Kevin Bartlett will attend the parade on behalf of the national organization.

• American Legion Post 102 and AMVETS 770 are presenting a Veterans Day Ceremony at Tucson Estates multipurpose room featuring several guest speakers, including Pima Co. Sheriff Mark Napier. Thank-you notes will be distributed to all attendees and delivered to the VA hospital that day. There will be a concert afterward.

• In Simi Valley, the Parks and Rec District is the annual host for the Veterans Day Commemoration at the Veterans Plaza within the Rancho Tapo Community Park. The ceremony begins promptly at the 11th hour of the 11th day of the 11th month. American Legion Simi Valley Post 484 Chaplain Stephen Sampson will provide the invocation. Various speakers will take part in the ceremony, including Simi Valley Mayor Keith Mashburn. Lunch is served after the ceremony.

• American Legion Post 28 member Steve Kemmerle is serving as coordinator of the Petaluma Veterans Day Parade, which will include a flyover by a restored Huey helicopter. The 2018 parade had over 200 entries with over 2,000 participants and 35,000 spectators. The parade is the largest Veterans Day parade north of the Golden Gate Bridge.

• In Hanford, American Legion Post 3 is coordinating a Veterans Day tank ceremony at the Veterans Memorial in the corner of the Hanford Cemetery.

In Benton, American Legion Post 280 and Auxiliary Unit 280, along with VFW Post 2671, will display flags at the entrance of the Masonic and Odd Fellows Cemetery, where they will conduct a Veterans Day ceremony. The trio also will conduct a ceremony at the Old Civil War Cemetery behind the post. Food will be served at the post following the ceremonies.

In Denver, American Legion Post 653 will have a program at Denver High School that will include a speakers, Boys and Girls State attendees, patriotic music and a 21-gun salute.

In Bridgton, recently revitalized American Legion Post 67 is recreating its 1919 Grand Ball that the post’s founders put on for the town and its veterans. The event will take place Nov. 9 and will feature American Legion Past National Commander Tony Jordan as the guest speaker. Post 67 also will have a rededication ceremony during the ball.

American Legion Post 227 will have a full day of Veterans Day events that include a service at Cheltenham Veterans Cemetery, an open house and American Legion 100th anniversary reflection.

Sons of The American Legion Squadron 71 in Gladstone is providing a meal for veterans residing in area assisted living facilities. The veterans will be honored with a salute as they enter Post 71, while a short Veterans Day program will follow dinner.

• In Shaler Township, color guards from American Legion Post 785 and VFW Post 9199 will conduct a service at the Veterans' Memorial in Shaw Place. The event will consist of readings from various Legion and Auxiliary members and will conclude with a color guard rifle salute.

• In Reading, the Reading Fightin Phils – the Double A affiliate of the Philadelphia Phillies – will hosts its sixth annual Veterans Day ceremony at FirstEnergy Stadium. Local community leaders will join Fightin Phils front office members at the ceremony, during which American Legion Gregg Post 12 in Reading will lay a wreath in front of the ballpark’s dog tag monument near the entrance to FirstEnergy Stadium. The monument pays tribute to all members of the United States military who sacrificed to protect the United States.

Johnson County Post 61 is teaming up with VFW Post 6908 and the Johnson County Honor Guard to present a Veterans Day program at Heritage Hall in Mountain City. The theme is The American Legion’s 100th birthday celebration. State legislators introduced a resolution to recognize the Legion’s centennial and contributions to Tennessee; State Sen. Jon Lundberg and State Rep. Timothy Hill will attend the program and read the resolution. County and city mayors will also read proclamations recognizing Post 61 and its contributions to its community. The Johnson County Community Children’s Chorus will present special music and there will be a special guest. A local artist will present a painting highlighting Post 61, to be donated by the Johnson County Community Arts Center. Past Department Commander Bob Hensley will serve as MC and speaker and will highlight The American Legion’s history. The program will be presented live on local radio, and Post 61 will host an open house after the program.

• American Legion Post 294 in Missouri City will take part in the groundbreaking of the Missouri City Veterans Memorial project. Post 294’s color guard will participate in the event, while various Legion leaders will deliver remarks. The memorial will feature a large five-point star representing the five branches of the U.S. military, with columns, a pond and eternal flame.

• “Centennial Celebration” is the theme of the Tarrant County Veterans Day Parade. The parade will honor the 100th anniversary of The American Legion and the American Legion Auxiliary, and members from both organizations will serve as co-parade marshals for this year’s march down Main Street.

The American Legion will be represented during the Auburn Veterans Day Parade on Nov. 9. Representatives from the Department of Washington American Legion, the American Legion Riders, two Legion districts and 13 American Legion posts will participate in the parade. The day’s events also will include a remembrance ceremony at Veterans Memorial Park and a luncheon at Merrill Gardens in Auburn.