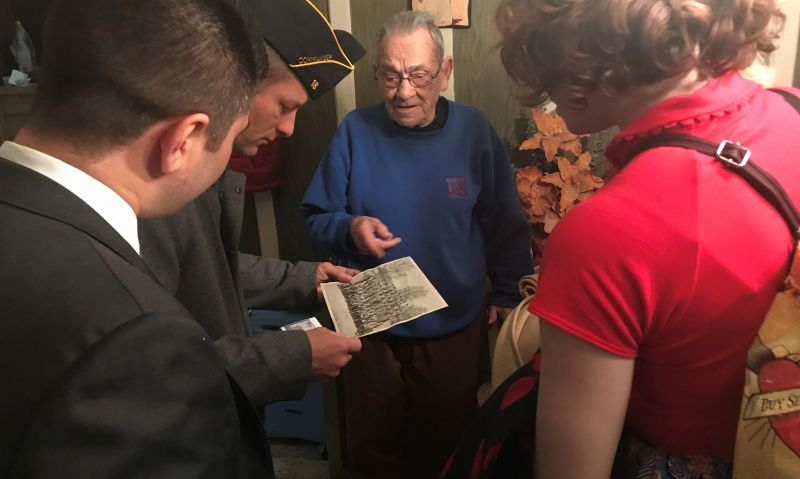 The Legionnaires from American Legion Post 18 in Weehawken, N.J., have managed to more than double the post’s membership in two years, thanks in part to focusing on community involvement.

That involvement, along with following the Legion’s long-time mantra of “veterans helping veterans”, was at the forefront of the post’s Veterans Day mission.

Yes, post members attended three Veterans Day ceremonies in the area – including one it co-conducted with Veterans of Foreign Wars Post 1923 – that morning. But in the afternoon, Post 18 members made visits to fellow post members who haven’t been involved in recent post activities.

One such member was World War II veteran Ernie Troisi, a 91-year-old widower in nearby Union City. Post 18 Commander Chris Page, First Vice Commander Troy Robert Mack and member Craig Vogel – all post-9/11 veterans – walked more than a mile to visit Troisi in the home the veteran has lived in since birth.

The goal was to perform a “buddy check” on their fellow members, as well as pass out membership cards. “They love being identified as Legionnaires,” said Page, who was active duty in the Army from 1992-1999 and currently is a sergeant first class in the Army Reserves. “And that’s what (non-commissioned officers) do in the service. You’re supposed to check up on your troops. We’re charged … with the health and welfare of our troops. What we like to do is check up on our members and make sure they’re OK. We also check in on their families as well. It goes back to helping out with the community.”

The Legion contingent was joined by members of Pin-Ups on Tour, whose members recreate the magic of the Hollywood Canteen that operated during the 1940s as a club offering dancing and entertainment for servicemembers who were normally on their way to an overseas deployment.

Troisi, whose wife passed away in the past year, shared photos he had of he and his wife, their family and Troisi’s younger years, when he was a gymnast and a track athlete. Page asked Troisi if there was anything he needed; Post 18 will help collect Troisi’s wife’s clothes that the veteran wants to donate to someone, as well as seeing that his disabled doorbell is working.

“I really appreciate it,” Troisi said of the visit. “Thank you so much for coming by.”

Mack, who served in the Army from 2004-2009 and now is the director of Human Services for Weehawken, said conducting the buddy checks is “literally just the right thing to do. Lord knows we would love to do this more often and more frequently. But certainly today is a day you call on your buddy and make sure that your buddy’s doing OK.”