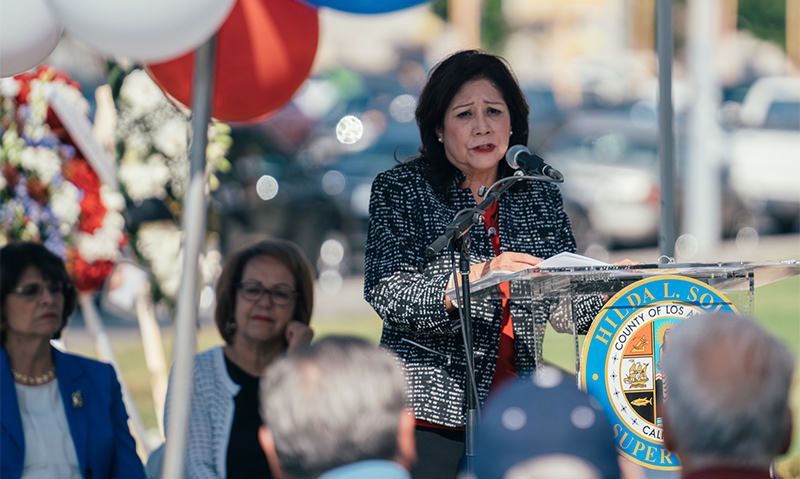 Anyone who thinks The American Legion lacks diversity should have been air-dropped into Atlantic Avenue Park in East Los Angeles Nov. 10.

In a pre-Veterans Day ceremony, community members of all demographics filled the park and heard from U.S. Rep. Lucille Roybal-Allard, D-Calif., the first Mexican-American woman elected to Congress, whose father was a charter member of nearby Eugene Obregon American Legion Post 804, as well as a member of Congress, himself, and Los Angeles City Council member. The post’s commander is East Los Angeles College student Karla Gonzalez, a U.S. Army veteran and single mother of five who served in Iraq, Afghanistan, Cuba and Africa; she told the crowd how important family and veteran support was during four deployments over a period of 12 years in the Army. That’s a big part of why she gives back through The American Legion.

“I continue to serve by helping veterans and families in our community because,” she told more than 100 veterans at the third annual event, “…without you guys, without all of your support, I wouldn’t be standing here talking to you right now. The road is not easy. But every time I fall, I manage to get up and continue to serve, and I continue to do the things that God has brought me here to do.”

Los Angeles County Supervisor Hilda Solis, a former member of Congress and Secretary of Labor whose parents met in a U.S. citizenship class, coordinated the Veterans Day weekend ceremony. “It’s a time for us to recognize the contributions made by all our veterans, as well as those who represent those veterans,” she said. “They have made us proud for many, many decades.”

At the event, Solis presented certificates of commendation to Post 804; Department Membership South Chairman Nick Rosa, who served as master of ceremonies; past American Legion National Executive Committee member Hugh Crooks Jr.; the Sons of The American Legion; American Legion Riders; a high school student who spent his summer vacation studying cancer at Harvard; Marine Corps League Detachment 1347; the Hispanic American Airborne Association; and others who strengthen the community, which has a proud tradition of military service and support.

The 1954-chartered post was named for Marine Private First Class Eugene A. Obregon of East Los Angeles who at age 19 sacrificed his own life to save a wounded comrade during the Korean War and received the Medal of Honor in 1951. A U.S. Navy ship, a highway interchange, a Marine Corps barracks and three parks, in addition to Post 804, are named in his memory. The post recently refurbished and colorized a portrait of the local hero that hangs inside the gymnasium at one of the parks.

Another speaker was state Sen. Maria Elena Durazo, the daughter of Mexican immigrant farm workers, who now represents the legislative district that includes East Los Angeles. “In particular, I want to recognize and honor the thousands of immigrant veterans, having been born in another country, who still adopt this nation and say, ‘I’m willing to do whatever it takes to protect the freedoms of this country,’” she told the crowd. “Even if they were physically not born here, they give of themselves, like anybody else.”

Post 804 Commander Gonzalez is one such veteran. “I was born in Mexico,” she explained. “I came here in 1996. I was confused. I was young… but one thing I did know for sure was that I wanted to serve this country. I came here for opportunities, and I took advantage of every opportunity that was offered to me. One of those opportunities was to join the service. I got my citizenship back in Germany, right after my deployment to Iraq. I came back, I took the oath, and here I am.”

Rep. Roybal-Allard encouraged those gathered for the event to honor veterans by volunteering in the community, through the schools, VA health-care facilities, neighborhood watch programs and cleanup projects.

“While it is not possible for us ever to equal the sacrifices of our veterans and their families, we can challenge ourselves to ensure that their services and sacrifices were not made in vain,” she said. “It starts with fighting our own cynicism, our own short-sightedness, our own selfishness and, above all, our own intolerance. It starts with realizing the necessity of universal patriotism and of honoring in our hearts, our minds and in our actions that for which our country stands and what our country means to us.”

She strongly urged those gathered to participate in the 2020 U.S. Census. “If every man, woman and child in our community and in our state is not counted, we will lose millions of federal dollars, which we did in the last census, for education, health care, housing and veterans benefits,” she said. “The fact is, if you are not counted in the census, then as far as the federal government is concerned, you do not exist.”

Crooks Jr., a Vietnam War combat veteran who now serves as chairman of the California Department of Veterans Affairs, shared with the crowd some of the key issues confronting those who served – unemployment, under-employment and homelessness among them. After delivering a Veterans Day proclamation to Solis from Gov. Gavin Newsom, Crooks described the cold welcome he and his fellow Vietnam veterans received when they came home in the 1960s and how simple words of thanks can go a long way today.

“Tomorrow, we celebrate Veterans Day, this day where we put veterans first,” Crooks told the crowd. “But I want to ask you a question: shouldn’t every day be Veterans Day? Shouldn’t every day, veterans are first? It’s up to us to ensure that every veteran feels his or her service to this country is appreciated by their fellow Americans. There are many tangible ways you can do that, some as simple as, ‘Thank you for what you’ve done for our country.’ For my Vietnam brothers and sisters, some as simple as, ‘Welcome home, brother and sister.’”

Following the ceremony, many made their way to Post 804 for a meal and to take in some of its history. “There’s a lot of history in this post,” says post service officer/chaplain/historian Armando Esparza, longtime member and Vietnam veteran, who happily showed visitors the post’s artwork and gallery of portraits. Included are photos of former military personnel with post connections, such as Obregon, Edward R. Roybal (father of Rep. Roybal-Allard), civil rights activist and Navy veteran Cesar Chavez, Rosa, Esparza and dozens of others, from World War I through the Global War on Terrorism. “We’ve got generations here – one that’s four generations here. A lot of veterans. I have family up on the board there, too. I have an uncle, I have a son who served in the Marines with me … they all stepped up.”