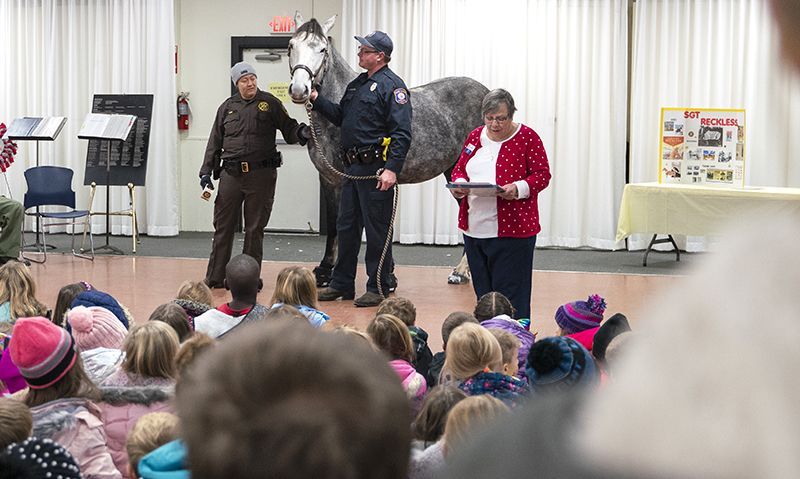 On the morning of Nov. 11, more than 160 elementary students, teachers and parents stood inside American Legion Post 179 in Walker, Mich., reciting the Pledge of Allegiance. It was the post’s fourth annual Veterans Day Student Education Program where students learn about military history characters and events through re-enactors portrayed by Legion Family members.

This year, the students spent time at five different stations during the hour and a half Veterans Day event: Rosie the Riveter, Matthew Brady (a Civil War photographer who brought the reality of war to the general public), Moina Michael (Poppy Lady), the Michigan Vietnam War Memorial that displays the names of 2,661 fallen Michigan servicemembers’ names, and the West Michigan Military Round Table Association that displayed military artifacts. Each station provided an opportunity for the students to hear stories about the characters, learn about the military uniforms and artifacts displayed, and ask questions.

Teaching youth about history “is important because it’s what shaped us and we have to remember that,” said Jena Wilmers, Post 179 adjutant and alternate 5th District commander.

The Veterans Day Student Education Program originated when Wilmers attended an event where a high school drama team shared about fires that changed history. In telling her mom, a U.S. history teacher, about what she saw, her mom suggested the idea of doing the same for U.S. military history, and to teach it to youth who are not always learning about it today in and outside of the classroom.

A session of the program is held in the morning and the afternoon, where in total nearly 350 elementary students participate. So the kids don’t see the same thing each year they return, new characters are brought to life. For example, the program has featured war dog Sgt. Stubby and the Tuskegee Airmen. Normally, a Black Hawk helicopter from the Michigan National Guard lands outside the post for the students, this year it was deployed. It’s the helicopter and military artifacts that the students often write about in their Christmas cards to troops that Post 179 places in care packages for those deployed over the holidays.

Christine Vezino, a fifth-grade teacher at South Elementary School in Grandville, has brought her students to the Veterans Day program from the start. Her nephew, a Marine veteran, was injured while serving in Afghanistan and asked Vezino to “make sure your kids understand what (war and service) is all about. I said I will. So as long as I teach, (bringing students to Post 179) is what we will do. It’s a lot of fun, and this is a way of helping them understand our history.”

Besides teachers and parents of the students, Wilmers said principals have attended the Veterans Day Student Education Program as well. “Their buy-in has helped because they see the value of the program.”

Once students arrived to the West Michigan Military Round Table Association, their excitement to try on basic field gear from the Vietnam War resulted in them lining up and patiently waiting.

“It’s history and you put it on a level that they can understand brings interests,” said Curt Lester, a Marine veteran and military artifact collector for about 45 years. The kids tried on a helmet, flat jacket and backpack to feel the weight of it all. “It actually gives them an idea of what they are seeing in the movies or in video games.”

Other artifacts on display for the kids to see included U.S. military uniforms; a medic aid bag; military chaplain's uniform and items; shrapnel from a German mine that the United States nicknamed the Bouncing Betty; war rations; Civil War swords, medals and bullets; and more.

The final history lesson delivered before the kids boarded the bus to head back to school was on Staff Sgt. Reckless, a decorated war horse that carried heavy ammunition to Marines during the Korean War. The kids sat quietly on the post floor in a semi-circle as a horse from the Grand Rapids Police Department Mounting Unit walked in with two officers. The children’s book, “Sergeant Reckless: Hero War Horse” was read to the students by 5th District Auxiliary President Deb Weatherbee.

“After serving in the Michigan Army National Guard I wanted to give back to the community,” Wilmers said. “I pray that each student is able to be inspired with their patriotism to uphold the Americanism and Children & Youth pillars of The American Legion.”