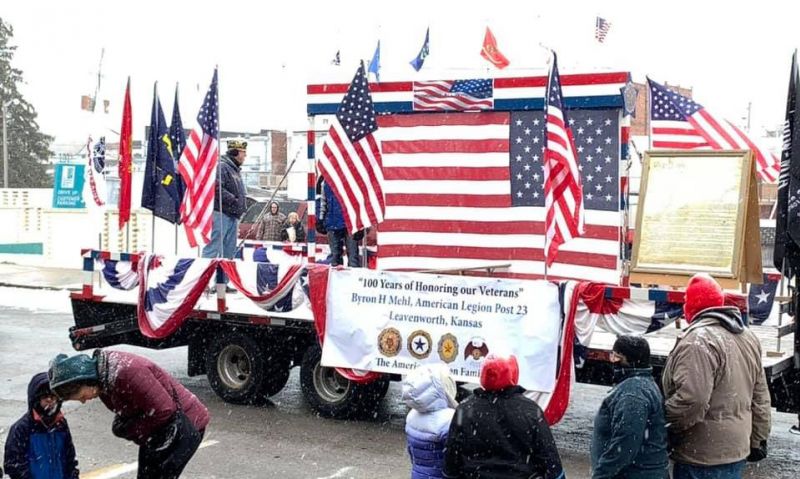 Record cold temperatures washed over parts of the country this week. And although it may have altered some Veterans Day plans, it didn’t stop American Legion posts and districts from commemorating the sacred holiday in some way, shape or form.

And across the country, American Legion posts hosted or took part in various ceremonies and events to commemorate Veterans Day. The following is a brief sample of those activities; Legion posts, districts and departments are encouraged to share stories and photos of their Veterans Day activities at www.legiontown.org.

In a ceremony conducted by American Legion Post 795 in South Lake Tahoe, approximately 200 veterans, first responders and area residents were present for addresses from veterans and Mayor Jason Collins. Before the ceremony, the approximately 560 veterans’ graves at nearby Happy Homestead Cemetery were decorated with U.S. flags.

• Snow and freezing temperatures didn’t stop a group of veterans and community members from attending American Legion Post 247’s annual Veterans Day service at Hodges Park in Park Ridge. The performance included an honor guard salute and performance of Taps. “Today is very special,” American Legion Post 247 member Steve Starvrakas said. “To those who have paid the supreme sacrifice and died in battle, bless them. To those who are in military or other hospitals recovering from war wounds, bless them. From the minutemen of the Revolution, to the last military defender of the day, bless them.”

In an Adair County ceremony, American Legion National Vice Commander Richard Heigert told attendees that Veterans Day belongs to anyone who has served. “It’s a time to honor all those who have served, those who are serving today, as well as those who have served at any time in the past,” Heigert said, adding, “Get with your fellow veterans and people who have served in the military, go talk to older veterans, let them teach you what it’s like to be a veteran.”

John Buckwalter, a member of American Legion Post 20 in Kirksville, added that “No veteran should ever have to be alone.” And the ceremony was the start of a new tradition. Rather than a moment of silence, the ceremony included the ringing of the bells of freedom, which will continue at future ceremonies.

The 14th annual Veterans Day ceremony at the Montana Veterans Memorial was moved inside to Centene Stadium because of cold temperatures. There, Montana National Executive Committeeman David Driver was the guest speaker at the ceremony, which also honored the 100th birthday of The American Legion.

Driver spoke of The American Legion’s legacy and how it has served veterans since 1919. "The American Legion portfolio has included acceptance of all effective treatments for PTSD and traumatic brain injury and not prescribed drugs alone,” he said. "Thousands of career fairs, business workshops and education forums to give veterans opportunities to succeed after service.”

The venue change didn’t stop dozens of community members from attending the ceremony, which also featured a color guard from Malmstrom Air Force Base and a national anthem performance from the Great Falls Symphonic Choir.

In Rockingham, members of American Legion Post 147 continued an annual Veterans Day tradition of visiting veterans who reside in area nursing and assisted living homes. The post members visited with around 30 veterans, something they have been doing regularly the past 20 years.

In Brunswick at City Hall, area residents gathered for the annual Veterans Day ceremony, where several Silver Star recipients were recognized by American Legion Post 234 Commander Bob Prevost, who also recalled the horrors of war and the common bond found on the battlefield, where “you see people doing for others what they would not anywhere else.”

In Winchester, thousands showed up to line the streets and parts of the Downtown Square on Nov. 10 to attending the Veterans Day parade. The parade was sponsored by American Legion Post 44, a centennial post, and included at least six marching bands – including the Tennessee National Guard’s 129th Army Band – nearly 20 floats and 135 decorated vehicles from area schools, civic organizations and veterans groups. The parades grand marshal was Bill Robinson, a U.S. Air Force veteran who was held as a prisoner of war during the Vietnam War.

Veterans representing wars and conflicts ranging from World War II to the current war on terror were honored during the parade. American Legion Post 44 Commander Ray Cobb was quick to praise all the organizers, helpers, veterans and participants in the parade. “I want to thank (City Administrator) Beth Rhoton and the City of Winchester for all the work regarding the pre-parade organizing,” Cobb said. “I also want to thank Franklin County Sheriff Tim Fuller and everyone involved in escorting all of our veterans who participated in the parade. I also wanted to thank the AM Rotary Club, the Franklin County Kiwanis Club, and especially Director of Schools Stanley Bean for his support with the parade and for keeping American patriotism alive in our schools. I’m hopeful that next year’s parade will be even bigger.”

Dozens showed up for Post 104’s Veterans Day ceremony in Appomattox. The ceremony included a bugle playing Taps, a ceremonial shot from a World War I cannon and a keynote address from Ret. Army Command Sgt. Major Gretchen Evans, a Bronze Star recipient.

"It is a story that thousands could tell. I just happen to be the one here telling it," Evans said. "When you become a person in service, when you raise your hand, you know your life is going to change. We are not broken. Things have happened to us, but we are not broken. I think giving us the opportunity to show you that is the best way to say thank you."

• In Cheyenne at American Legion Post 6’s ceremony, nearly 500 veterans and their family and friends, and community members were in attendance. Post 6’s honor guard presented the colors, while Post 6 Commander Bill Barnes asked the crowd to think about the story of each veteran in the room, stories that represented “the exceptional and the extraordinary. Every single woman and man who has raised their right hand and pledged to give their life if their country had needed, did so for a reason. Ask them why.”

• Kaysen Ray Bear was the first baby born on Veterans Day at Memorial Hospital of Sweetwater County in Rock Springs. And to honor her birthday, the Legion Family from American Legion Archie Hay Post 24 provided the newborn with a big bath tub full of items that included diapers, baby wipes, some outfits, hand-crafted quilts, hand-crocheted stuffed animals, bath items, towels and more. “It’s a gift to the community and something for us to celebrate on Veterans Day,” said Department of Wyoming Auxiliary President Gina Dusel.