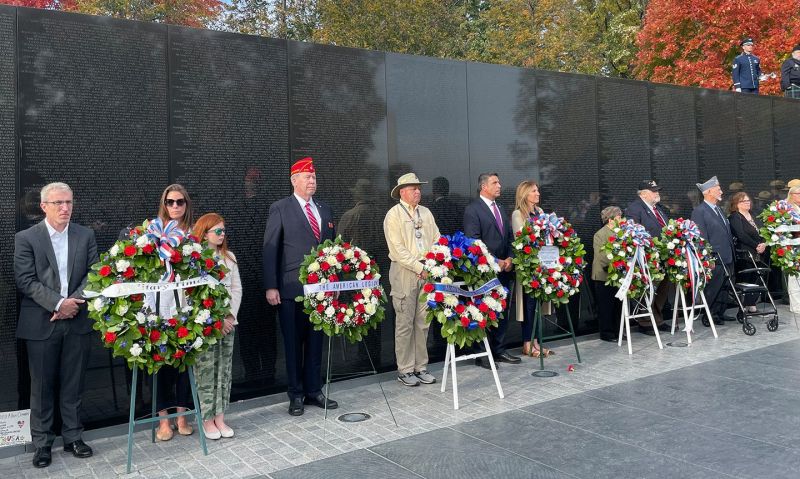 Past National Command Brett Reistad lays a wreath at the Vietnam Veterans Memorial in Washington, D.C.

American Legion Past National Commander Brett Reistad honored those who served by placing a wreath at the Vietnam Veterans Memorial in Washington on Veterans Day.

He recalled music from “Apocalypse Now” being played over loudspeakers during the march.

“It really brought you into the emotion the gravity of the moment and what it was all about. It’s meaningful to be back here,” said Reistad, reflecting on what inspired him to serve. “We would see the numbers and names of those killed in Vietnam on the evening news.”

Jeff Reinhold, superintendent of the National Mall and Memorial Parks, addressed the crowd and shared the meaning of Veterans Day.

“Today, we pause to honor those past and present who have served in our nation’s military to contemplate you and your family’s many sacrifices and to reflect on what you’ve done for our country,” he said.

Lt. Grace Moore, a Vietnam veteran of the U.S. Army Nurse Corps, shared the importance of the Memorial Wall and her experience as a woman veteran.

“We Vietnam women veterans stood on the shoulders of the women who served before us,” Moore said. “You could gather 100 of us in a room and hear 100 different, but similar stories.

“There was only one common thread that tied us together then and still ties us together now,” she continued. “We were all volunteers. We went forward to do whatever job we were assigned to do and in whatever location we were sent.”

Moore said it took 16 years before she acknowledged to herself that she is a veteran, let alone share it with anyone else. In 1982, the memorial wall, which has the names of eight women inscribed, was dedicated. She wanted to attend, but couldn’t work up the courage.

“It wasn’t until two years later that I was able to make the journey to this sacred place,” Moore said.

Eleven years after the dedication of the Vietnam Veterans Memorial, the Vietnam Women’s Memorial was unveiled in 1993.

“That special memorial has become a deep well of cool, refreshing and healing waters for so many people,” Moore said. “It’s a place of comfort and reflection for all who come by.

“As long as we say the names of those who have gone before us and those who are still with us, they will never be forgotten.”