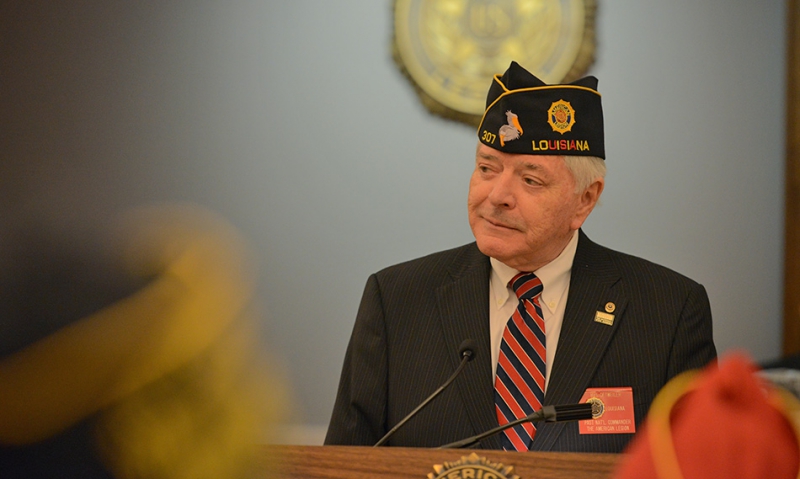 Continuing its efforts to raise awareness about servicemembers and veterans suffering from traumatic brain injury (TBI) and post-traumatic stress disorder (PTSD), The American Legion will conduct a symposium in June focusing on both injuries, as well as conventional and alternative treatments for each.

During The American Legion’s Spring National Executive Committee Meeting in Indianapolis on May 7, Legion Past National Commander Bill Detweiler – chairman of the Legion’s TBI/PTSD Committee – announced that the Legion’s symposium will take place June 24 at the Institute of Medicine of the National Academies in Washington, D.C.

The symposium, “Advancing Treatment and Care for Veterans with TBI and PTSD,” will:

• Discuss the findings and recommendations from the TBI and PTSD veterans survey conducted in February 2014 by the Legion;

• Bring together servicemembers, veterans and caregivers to talk about their TBI and PTSD treatment and care; and

• Determine how the White House, Congress and Departments of Defense and Veterans Affairs are integrating complementary and alternative medicine treatments and therapies into models of care for veterans with TBI and PTSD.

Attendees of the symposium would include The American Legion's TBI/PTSD Committee, American Legion national and department leadership from the area, members of Congress, and researchers, clinicians and policy makers from both VA and DoD.

Up for the committee is the formation of two working groups – one focused on complementary and alternative medicine (CAM) treatments and therapies for both conditions, and the other dealing with how caregivers are affected by their loved ones dealing with TBI/PTSD.

“That’s something that we really never talk about – the effect on the caregiver having to deal with these people suffering from these problems,” Detweiler said. “(The working group) will identify the needs and gaps of caregiver programs, and ways these programs can be improved and effectively supported on the national and local level.”

Detweiler also shared with the NEC some of the findings of the Legion’s February survey. Most of the 3,116 respondents served in the Army, most receive their treatments at VA facilities, most have sleep problems, and most experience similar symptoms of anger, pain, anxiety, depression and irritability.

Most also said that medication remains the front-line medical treatment; some respondents said they were taking up to 10 prescriptions for their symptoms. And perhaps most alarming, 30 percent terminated their treatments for TBI and/or PTSD prior to completing them.

“The committee will continue to build on the findings and recommendations that the survey has highlighted regarding the types of treatments and therapies that are provided to patients who are suffering from a TBI, PTSD and/or both,” Detweiler said.