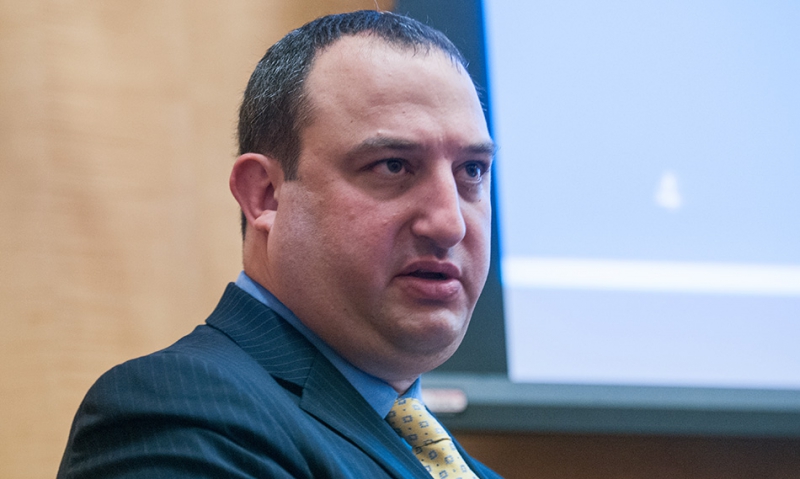 Dr. Jeffrey Greenberg of Data Recognition Corp. shares the results of the Legion's study on TBI and PTSD. (Photo by Noel St. John)

Of the more than 3,100 respondents who completed the online survey in February, 59 percent reported either feeling no improvement or worse after undergoing TBI and PTSD treatment. And 30 percent said they had terminated their treatment plan before completion.

The results of the survey were shared during the June 24 American Legion symposium “Advancing Care and Treatments for Veterans with TBI and PTSD” at the Institute of Medicine in Washington, D.C. Public- and private-sector experts shared information during the day-long event – including information from the Legion’s survey that was conducted with Data Recognition Corporation.

Dr. Jeffrey Greenberg of Data Recognition presented the results of the survey. He said that of the respondents who terminated their treatment plans early, 20 percent did so because of a side effect associated with the treatment. Approximately 20 percent ended their treatments because of dissatisfaction with their provider.

• Nearly half of all respondents had discussed some type of complementary- and alternative-based treatment with their providers.

• A sizable proportion of respondents reported prescriptions of up to 10 medications for PTSD/TBI across their treatment experience.

Based on the survey, it is recommended that, in order to establish a knowledge base on the care of veterans with PTSD and TBI, a multi-step program of research is needed over a period of years. A second track of research and development is needed to ensure the availability of a trained workforce prepared to treat PTSD and TBI. The next steps, the survey concluded, are to establish a national advisory group to plan the multi-step research program, and refine the survey design in preparation for collection of baseline data and tracking surveys.

The complete survey can be found here.

Along with the survey results, the symposium – sponsored by Military.com – included speakers from the Departments of Veterans Affairs and Defense, the U.S. Army, the Defense Centers of Excellence for Psychological Health and TBI, the Institute of Medicine and the RAND Corporation. Panel discussions covered TBI, PTSD, complementary and alternative medicine, and caregivers and family support.

Retired U.S. Navy Rear Adm. T.L. McCreary, president of Military.com, said that the stigma associated with TBI and PTSD needs removed because of its far-reaching consequences. “We have veterans, particularly Iraq and Afghanistan veterans, who are trying to hide their military service when they go in and apply for jobs,” he said. “They try to write it up a different way because some employers say, ‘I’m not going to take that risk.’”

Getting those suffering from PTSD to seek treatment can be difficult. Retired Col. Charles Hoge, a consultant in the Office of the Surgeon General, said that while servicemembers are more willing to seek care, “The most recent data we have shows that we have a long way to go. We’re facing numbers that are pretty daunting in both VA and DoD: estimates of only around half of individuals who are in need of care coming to get care, and upwards of half of those coming into care are dropping out of care (before completion).”

And Dawne Vogt, acting deputy director of VA’s Women’s Health Sciences Division of the National Center for PTSD, said that, “Even when these veterans are getting mental health treatment, they’re not getting enough treatment to really reap the full benefit.”

On the traumatic brain injury side, Col. Dallas Hack of the U.S. Army’s Medical Research and Materiel Command said that even as combat draws down, the need to address TBIs won’t decrease. “Although this came to our attention because of blast injuries, the problem is much larger than that,” he said. “Eighty-three percent of the cases of traumatic brain injury occur outside of the combat zone. That means this problem is not going to go away. It’s going to continue, and we need to continue to work on it.”

The need for sleep – and the lack of sleep associated with PTSD and TBI – was discussed. Lt. Col. Dennis McGurk, a deputy director with the Army’s Medical Research and Materiel Command, said treating that issue can have a bigger benefit. If a patient suffering from PTSD can get help with sleeping, McGurk said, that patient is more likely to return for additional treatments.

Various complementary and alternative medicine (CAM) treatment plans were discussed. Dr. Robert Koffman of the National Intrepid Center of Excellence said that one reason for taking a CAM approach is that 60 percent of veterans still meet the criteria for PTSD after they’ve undergone traditional treatments. Dr. Tracy Gaudet, the director of VA’s Office of Patient Centered Care and Cultural Transformation, added that PTSD and TBI are examples of why VA needs to expand beyond what it thinks of as traditional health care.

The Institute of Medicine’s Roberta Wedge discussed IOM’s recent study on PTSD treatments for the military and veteran population. Among the recommendations made by the study were DoD and VA developing an integrated, coordinated and comprehensive PTSD management strategy that plans for the growing burden of PTSD for servicemembers, veterans and their families; that leaders from both departments should communicate a clear mandate through their chain of command that PTSD management, using best practices, has high priority; and that both agencies should develop, coordinate and implement a measurement-based PTSD management system that documents patients’ progress over the course of treatment and long-term follow-up with standardized and validated instruments.

In addition to hearing from mental health and medical experts, more personal stories were shared during the symposium. U.S. Army Staff Sgt. Julio Larrea, who suffered severe injuries serving in Afghanistan, now works at Walter Reed Army Medical Center as a squad leader. Larrea, a Legionnaire, said that serving as a peer-to-peer counselor to fellow wounded warriors at Walter Reed “makes me feel like I’m part of the solution.”

Andrea Sawyer – whose husband, Sgt. Loyd Sawyer, was diagnosed with TBI and PTSD – spoke firsthand on the difficulties faced by caregivers. Sawyer said she eventually had to remove their children from their home because she feared they may come home and find their father dead. Later, Sawyer said, “(Loyd) proceeded to tell me how he planned to slit his throat,” she said. “Those are words, as a wife, that I cannot unhear.”

Sawyer said there still are difficulties with getting treatment, and that making sure the caregiver is an equal part of that treatment is critical. “Thirteen years into it, I need people to understand that not all injuries are visible and not all barriers to getting to treatment are physical barriers,” she said. “As a caregiver to a person that suffers memory loss, if (doctors) don't talk to me, you get half the picture you need for treatment.”

Linda Kreter, the founder and CEO of Wise Health Inc.’s Veteran Caregiver, said that caregivers need to be made a part of the care team - “an equal member.”

American Legion Past National Commander William Detweiler, chairman of the Legion’s TBI and PTSD Committee, was pleased with the inaugural symposium. “We look forward to taking a lot of the information we learned today and move forward in some various programs and planning that (our) committee will be doing over the next couple of years,” he said.

Click on any of the links below to get the presentations made during the symposium.