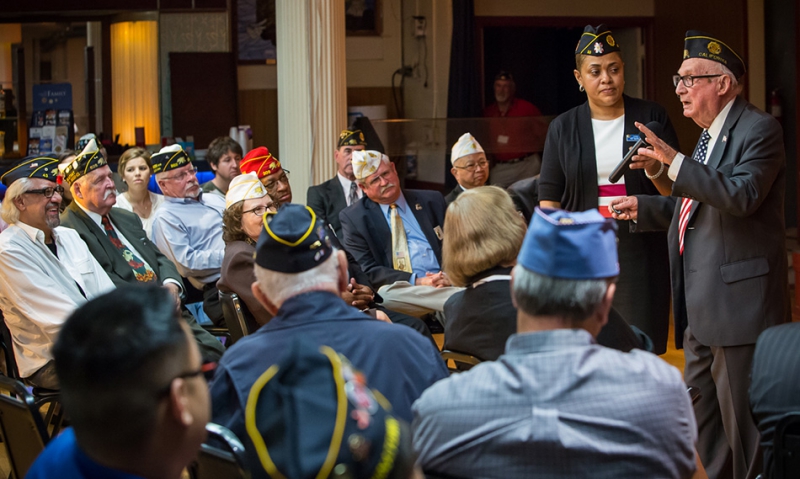 Eva Mayes has a simple question after watching her husband suffer the humiliation of lying in his own waste, enduring the pain of bedsores and the anguish of neglect during his two years as a patient at the West Los Angeles VA Medical Center.

"How are you going to help my husband?” she asked VA officials during a Monday Town Hall Meeting at American Legion Post 43 in Hollywood, Calif. Her husband, Willie Mayes, served in the Air Force in Vietnam from 1962 to 1965, his wife explained, but he is incapacitated and cannot speak for himself. So she came to The American Legion gathering to speak for him. By the end of the session, she was assured she would receive an answer from VA.

Veronica Wayne, meanwhile, expressed dismay that VA physicians are so overbooked that she spends an unbearable amount of time sitting in waiting rooms. Wayne, an Air Force and Navy veteran who served from 2000 to 2013, also questioned why VA wouldn’t provide acupuncture for neurological issues, despite a pledge to offer more complementary and alternative treatments.

And Terry Scott-Mitchell told the story of her husband, a Korean War veteran, who died before VA approved his benefits claim, despite repeated trips to VA offices. “Where do I go?” she asked.

These were only a few of the issues aired by veterans at Monday's town hall meeting, which received national television coverage. Also at the event, one Vietnam veteran received a standing ovation after detailing his miserable welcome home from the war in Southeast Asia and subsequent years of mistreatment.

The town hall was attended by national, state and local American Legion officials – including California Department Service Officers and staff – representatives from two congressional offices, the mayor’s office, Los Angeles County, and a cross-section of veterans groups. The town hall presented a forum to air complaints and look for ways to work together to improve services for veterans, said Verna Jones, executive director of The American Legion.

“It takes a whole village to make sure our veterans are OK,” Jones said.

Two VA officials were on hand to address concerns raised by veterans and families and to personally promise to help. Dr. Dean Norman, chief of staff for VA’s Greater Los Angeles Health Care System, came to the front of the room to assure Eva Mayes he would review her husband’s chart immediately and call her.

Time after time, Robert McKenrick, director of the Los Angeles Regional Office, tracked down veterans in the audience, gave them his business card, took down their contact information and promised to personally check on their claims.

Several of the people attending the hearing also expressed concern about the settlement of a lawsuit over VA illegally leasing land at its West Los Angeles campus to private businesses instead of using the facilities for veterans, as the original deed dictated when the land was donated to the federal government in 1888.

“I want to know when the Jackie Robinson baseball diamond is going back to us and not UCLA,” one veteran said. The baseball facility is leased to UCLA and is one of several business arrangements by VA that a federal court judge has ruled to be illegal. VA Secretary Robert McDonald has publicly committed to return the West LA campus to its original use, particularly to assist women and homeless veterans.

Former Marine James Murtha asked if there’s going to be an independent audit of the funds VA received from decades of leasing the property to private interests, from a rental car company to a hotel laundry – money the agency has never accounted for. Several veterans said they were worried that veterans didn’t have a seat at the table where decisions about the future of the West Los Angeles campus are being made.

Jones and Louis Celli – the Legion’s Veterans Affairs and Rehabilitation director – assured attendees they would take concerns over the West Los Angeles VA lawsuit settlement, access to care and other issues to VA's Central Office in Washington.

Jones, Celli and other Legion officials came to Los Angeles following reports that veterans there experience long delays getting medical appointments despite promises to improve care after a similar scandal erupted in Phoenix last year. As of Jan. 15, some 400 veterans had waited up to six months each between the scheduling of an appointment and actually seeing a doctor, according to documents obtained by CNN. Another 1,600 veterans had waited 60 to 90 days for their first medical appointments. And more than 300 veterans have waited between 30 and 90 days for treatment at VA mental health clinics in the Los Angeles area, CNN reported.

The Legion is determined to work with VA to improve the beleaguered health-care system, Jones said.

Monday’s town hall kicked off a multi-day effort by American Legion volunteers at the local, state and national levels to assess veteran health care in the Los Angeles area and look for ways to make improvements.

Legion officials also are visiting the disability claims processing center at the Los Angeles Regional Benefit Office and the West Los Angeles VA Medical Center. They will meet with officials at a community based outreach clinic and two Vet Centers in East Los Angeles, as well.

On Wednesday evening, the Legion team will travel the city to get firsthand understanding of the LA homeless veteran situation.

The American Legion Claims Coach is a handy, secure organizational tool to help veterans and their service officers get through the VA benefits claim filing process.