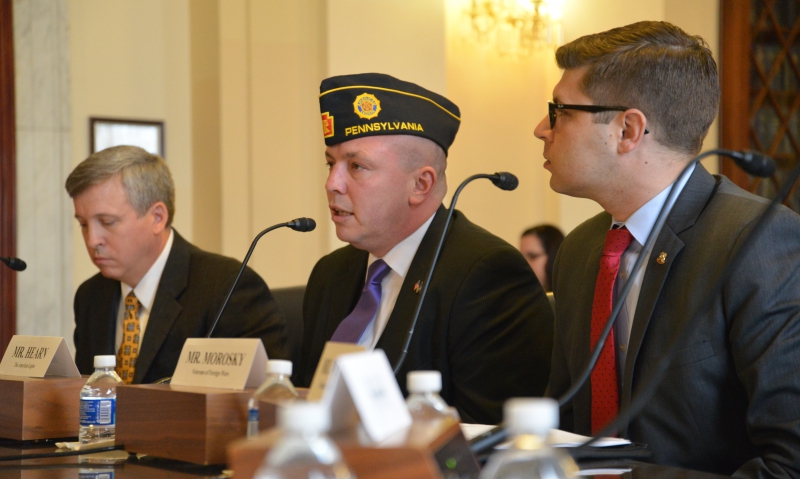 Zachary Hearn, deputy director of benefits for the Legion’s Veteran Affairs and Rehabilitation Division, testified regarding the VA’s disability claim process as it relates to Gulf War Illness on March 15, 2016.

According to the Department of Veterans Affairs’ March 2014 Update for Gulf War Veterans newsletter, 37 percent of veterans that served during Operation Desert Storm suffer from symptoms associated with Gulf War service. Yet, in over 9,300 days since the final shots of Operation Desert Storm were fired, approximately 80 percent of all claims associated with Persian Gulf service were denied, according to a separate VA report.

Zachary Hearn, deputy director of benefits for the Legion’s Veteran Affairs and Rehabilitation Division, testified March 15 regarding the VA’s disability claim process as it relates to Gulf War Illness.

During a joint hearing with the House Committee on Veterans’ Affairs Subcommittees on Oversight and Investigations and Disability Assistance and Memorial Affairs, Hearn affirmed the Legion’s commitment to advocacy efforts for veterans exposed to environmental hazards.

“Approximately 9,358 days have lapsed since our nation deployed nearly 700,000 brave men and women of an all-volunteer military to soundly defeat an aggressor and secure the peace,” Hearn stated. “Today, many of these veterans need our help, and sadly, they have not been able to receive the benefits associated with their service in Southwest Asia.”

During his remarks, Hearn noted the following barriers that prevent veterans from receiving approval of their Gulf War Illness-related claims:

• Medical professionals are unsure how to address undiagnosed illness.

• Some Veterans Benefits Administration (VBA) employees may not understand the rules regarding the treatment of such claims in the VA disability benefits process.

• The massive reliance on National Guard and reserve component servicemembers to fight and win the Gulf War still contributes to problems with transmittal of military records to VA.

Currently, the VA identifies dozens of medical conditions that are presumptively related to Gulf War service. The concept of VA presumptively service-connecting conditions associated with environmental exposures is not new to this generation of veterans.

Conditions such as diabetes, ischemic heart disease and a variety of cancers are presumptively related to herbicide exposure in Vietnam. Additionally, veterans of the era of atomic weapons and radiation testing have had multiple conditions presumptively ascribed to radiation exposure in service.

“Here is the catch," Hearn said. "The moment the veteran is diagnosed it is virtually impossible to receive service connection on a presumptive basis because the condition is no longer undiagnosed.“For those that ultimately gain service connection, it only comes after years of testing to exhaust the possibilities of other diagnoses. This process often causes significant stress for veterans and their families.”

Oftentimes treatment records get scattered between duty stations, mobility centers and forward hospitals. As a result, these veterans are unable to receive the required positive nexus statements for conditions that could be attributed to their military service because their service records are not available.

To help correct problems facing Gulf War veterans, The American Legion believes that all of VA’s disability benefits questionnaires should include questions that ask if the veteran served in Southwest Asia and if the medical professional considered the relationship between the sought symptoms or conditions and Gulf War service.

Whether the hazard is Agent Orange, radiation, chemicals used during Project Shipboard Hazard and Defense, Gulf War Illness or conditions related to burn-pit exposure in Iraq and Afghanistan, The American Legion’s position has been to treat the affected veterans, study effects to improve treatment, protect future generations, fully fund research and publicly disclose all instances of contact so affected veterans can seek treatment.

Hearn concluded his testimony reiterating the Legion’s unwavering efforts to advocate on behalf of the men and women who were exposed to environmental hazards while serving halfway around the world.