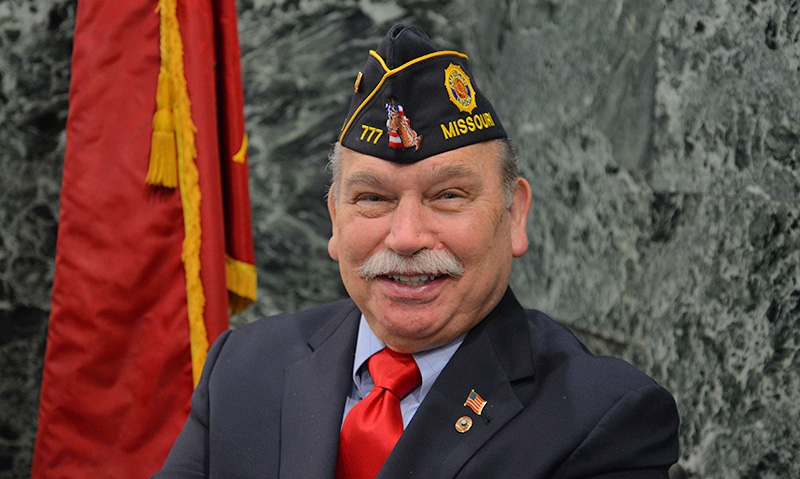 American Legion Past National Commander Joseph Frank traveled from St. Louis to Washington, D.C., on Monday to attend a roundtable discussion where ideas to privatize the Department of Veterans Affairs were proposed.

Members of VA’s Commission on Care met with Frank, along with other American Legion representatives and stakeholders, to discuss what is described as a “strawman" plan that has circulated in Washington suggesting the inception of a community care-based system for veterans – similar in nature to the 2014 Choice Program that provided veteran access to VA health-care facilities when they are too distant or overcrowded for patients in certain areas of the country. The plan would shut down VA medical centers over time, sending veterans out into their local communities to receive all of their medical treatment.

Frank, who is a T4-5 paraplegic, shared some of his experiences about his recovery at the Hines VA Spinal Cord Center in Chicago and expressed his concerns with the proposed plan. Frank has been using VA medical care since 1968 after he was discharged from the Army after an enemy land mine left him with a spinal cord injury.

“Over the past 40 years, the VA has provided me with excellent care," said Frank, who was injured while serving as a combat engineer in the Vietnam War. “The VA is a place where veterans can go and feel like people understand them. While we are there, we build rapport with our doctors, and that means a lot to me. If it wasn’t for the VA, I wouldn’t be here today."

American Legion Past National Commander Daniel Dellinger and Past Department of Virginia Commander George Lussier were also at the meeting. American Legion Executive Director Verna Jones, along with other key stakeholders, offered additional insight on the quality of care offered at VA facilities.

Jones said that focusing on fixing the existing problems at VA would be a better option than a complete overhaul of the system.

“Why would you want to start all over again?" she asked. "Your hope is to transition to a long-term comprehensive community care plan. We already have a system in place for veterans. All we have to do is tweak that. Let’s figure out what the problems are. Let’s talk to veterans, find out what they want, and bring resources back to ensure that the system that has been in existence for a long time gets better and serves the needs of our veterans."

“The proposal seriously undermines the committee’s purpose – to develop a 20-year strategy providing timely, high-quality care for veterans who use Department of Veterans Affairs services – and raises conflict-of-interest concerns when those promoting privatization stand to gain financially if that becomes VA’s future,” he said. “I don’t understand how commissioners paid by the federal government are able to break ranks, create an unapproved report, and try to advance self-serving agendas while operating as congressional appointees,” he strongly added.

During the roundtable, commission members went on record stating that their announced plan was an attempt to create discussions with stakeholders regarding the future of VA's health-care system – thus the "strawman" reference.

Commission member Darin Selnick stated that VA’s problems are so far-reaching that the best solution for providing the best possible care to veterans would require complex changes and a system-wide overhaul of the Veterans Health Administration. He urged veterans service organization representatives to propose other viable options or changes to the plan.

The group discussed other topics such as the role of VA health care and community providers, what veterans want, and how veterans will access care in the future.

Now that stakeholders’ concerns have been voiced, the Commission on Care plans to release a detailed report in June that will outline a more comprehensive strategy.