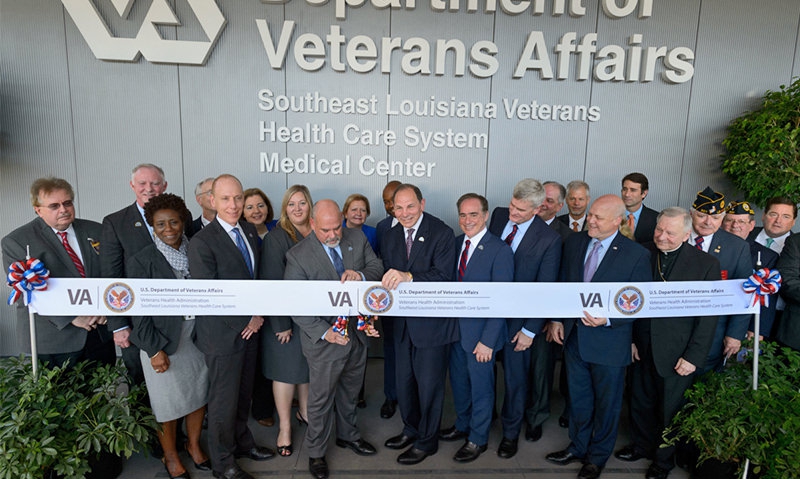 “This is great – a long time coming,” Brooks said with a proud smile as veterans, families, politicians, health-care providers and others cheered his service in the shadows of a shimmering new VA hospital of 1.6 million square feet now in operation between Canal Street and Tulane Avenue, near the heart of a city that looked like an atomic bomb hit it in 2005.

“We did this for you, Mr. Brooks,” Dr. Shulkin said. “Thank you for your service. Thank you for waiting this long.”

The storm and its aftermath, which damaged or destroyed about 80 percent of the city, shut down all but the top two floors of the old VA medical center on Perdido Street. Hospitalized veterans had to be evacuated to facilities in surrounding areas and even other states, if they could get there, after the storm. VA quickly established triage care stations, some in tents and one in a vacant department store, to care for patients. A circuit of leased clinics around the metropolitan area was soon wired together as the city and region began the long, costly ordeal of rebuilding. More than 1,500 are estimated to have lost their lives. Property damage is calculated in the tens of billions of dollars, the costliest natural disaster in U.S. history.

From out of the crisis, as $600,000 in federal disaster-relief funding was appropriated immediately after the storm to get started on the new VA hospital, which was ultimately a $1 billion project, an opportunity arose. Opportunity became reality on Friday, Nov. 18, at 9:53 a.m., when officials, including VA Secretary Robert McDonald and American Legion Past National Commander William Detweiler, cut the ribbon on the new Southeast Louisiana VA Medical Center, a centerpiece in an emerging biomedical corridor that has already shifted the city’s long-term economic outlook.

“This is the culmination of 11 years of a lot of work, a lot of time and a large team of people that believed in the vision of bringing veterans health care back to southeast Louisiana,” said Detweiler, who has fought for the new hospital since before the flood waters had subsided from his own home in New Orleans. “It’s a spectacular facility. It provides cutting-edge medicine to veterans of this area, and it’s going to be a destination facility for a number of different major medical interests, such as neurology, orthopedics and mental health care.”

“It means a lot,” said Jay Walsh, a former American Legion department service officer who has been immersed in the VA medical center journey since the hurricane struck; his New Orleans home was nearly destroyed, as well, by the floods. A member of American Legion Post 175 in Metairie, La., which donated the U.S. flag that flies above the new medical center, Walsh said the facility is already having a positive ripple effect in a part of the city that had fallen into serious disrepair even before the storm. “Now, look at it. It’s a thriving place where veterans will be treated, and it’s gotten rid of the crime, and it’s going to employ a lot more than the 2,500 they said they were going to have.”

The facility, with 120 acute-care beds, occupies a 29-acre campus adjacent to a year-old University Medical Center teaching hospital staffed by Louisiana State University and Tulane University medical faculty, researchers, interns and students. University Medical Center health-care providers will augment more than 2,500 VA employees through an affiliation relationship that fully resumes now that both facilities are up and running after the storm.

“By working together, we can do more than any single agency or department of government can do alone,” McDonald told the crowd, referencing the importance of VA’s med-school affiliations – a post-World War II initiative of Gen. Omar Bradley, who led the Veterans Administration for two years in the late 1940s.

Brooks, who was recognized for his patience as well as his service in the Pacific Theater of World War II, was already a New Orleans VA patient when Gen. Bradley began realigning the agency to handle the imminent postwar demand surge. “It was pretty good, but it wasn’t exactly up to date for what they wanted to do,” Brooks remembered of the 1945 facility where he first got care.

Aging infrastructure is a major issue in today’s Department of Veterans Affairs, McDonald said, noting that some 900 VA facilities nationwide are 90 years old or older and another 1,300 have been standing 70 years or longer. “These older facilities don’t meet today’s standards for hospital construction,” McDonald said. “They also don’t help us meeting a growing population of female veterans. They were designed to provide health care in the 1930s not in the 2020s. The rooms are too small to accommodate state-of-the-art medical equipment and procedures. An operating room today is twice the size of an operating room just three or four years ago. They lack the privacy, the convenience, the comfort that veterans – especially female veterans – expect today. They need to be replaced with new facilities like this one.”

That, however, is a costly proposition. The Southeast Louisiana VA Medical Center will weigh in at about $1 billion overall and will have taken more than six years to build since its 2010 groundbreaking. From the time the project was first authorized and disaster funds seeded it, the medical center’s route to completion has included multiple changes in federal regulations and design specifications, including shifting rules about security and environmental impact, and new policies to improve facility access and privacy for women veterans.

Adds Detweiler, VA care is unique, so cost and construction-time comparisons with non-VA hospitals don’t often apply. Nor do comparisons between VA and non-VA providers. “The health care that VA offers to our veterans is a different form of health care than what the veteran could get in a private hospital,” Detweiler said. “The staffs of the VA hospitals know what to expect. They know how to deal with veterans. They know what the injuries are all about and what these veterans have done in defense of their country. You’re not going to get that in a private hospital.”

“At VA, we are privileged to have the best and most inspiring mission in government – caring for those who have borne the battle and for their families and their survivors,” McDonald said. “It’s a noble mission, and our 360,000 employees – one third of them veterans themselves – are proud to be a part of it.”

U.S. Sen. Bill Cassidy, R-La., was an LSU School of Medicine student in the 1980s when he had physician training at the New Orleans VA Medical Center. Today, he serves on both the Senate Committee on Veterans’ Affairs and the Senate Appropriations Committee, both of which have been integral in the equation of replacing the New Orleans hospital, which will serve some 70,000 patients in the region. He said at the dedication event that veterans themselves were their own best advocates in the project.

“It was your advocacy, it was your input that put together a facility that provides a wonderfully built environment as dedicated to your health as the aides, the nurses, the doctors and technicians will be,” Cassidy said.

“The journey has been incredible and unpredictable at times, but we have traveled it together, with veterans, veteran advocates, city, state and federal partners all working together to fulfill a legacy,” said Fernando Rivera, director of the Southeast Louisiana VA Health Care System, who returned to his home town of New Orleans two years ago, leaving a higher-level VA position in Washington, to help bring the facility to life. “We have come a long way from that dreadful Labor Day weekend of 2005. We all share a common bond and a personal commitment to this journey.”

“What we are doing here today has deep and abiding significance,” Landrieu told the crowd. “As we face a very difficult time – when it seems we don’t agree on much – I want everyone to look around. This is what America looks like when we are all on one team all the time.”

Among the attendees Friday was Julie Catellier, who came to New Orleans as an experienced emergency manager for VA immediately after the storm and floods hit. Within months of her arrival, she was named director of the health-care system and spent the next seven years working through the many complications of funding, siting, designing and breaking ground on the medical center. Now retired from VA, she was overjoyed Friday to see it all come to fruition.

“It’s like a picture has come alive,” Catellier said after the ceremony. “We built this from the rubble up. What a ride. What a joy. This is keeping the promise to tens of thousands of people. Who gets to do this? Only in America. This is a day I dreamed about.”

Louisiana Gov. John Bel Edwards, an Army veteran, said it may have taken over a decade, but the medical center is done right. “This is what it looks like to put veterans first, even if it takes a little longer than it should,” he said. “This day has been a long time in the making. The devastation left behind by Hurricane Katrina left a void in the centralized health-care facility that we have always needed for our veterans.”

He said the days of veterans having to travel to Houston, Jackson, Birmingham or beyond for hospital treatment are “no more … 70,000 veterans across 23 parishes will be able to receive the treatment they need right here in New Orleans. Our veterans are going to receive the very best care available anywhere. We have veterans with critical needs, and they are not going to be bounced around anymore from one facility to another. The care that they need, and the care that they deserve, will be available right here under this roof.”

“This is absolutely terrific,” said Louis Hoerner, a combat veteran and member of American Legion Post 397 in Harahan, La. “I’ve been going to the VA since 2002. I am a Vietnam veteran, Purple Heart, so I have some service-connected disabilities I get treated for. This is really a long time coming. It’s going to be world class. We’re probably going to have the best care in the world once they get it all up and running.”

For him and about 70,000 other veterans, the wait to get it all up and running is finally over, and the result is something that local leaders envisioned after the disaster.

“One of the things we speak about in New Orleans, post-Katrina – besides the fact that we are an example to the rest of the country about how to build triumph out of tragedy – is the mantra that when we built it back, we were not going to build it back the way it was,” Landrieu said. “We were going to build it back the way it should have always been, had we gotten it right the first time. You can take it to the bank – that the City of New Orleans and this metropolitan region is going to win the healthy competition to treat veterans better than anywhere else in the United States of America.”

The American Legion Claims Coach is a handy, secure organizational tool to help veterans and their service officers get through the VA benefits claim filing process.