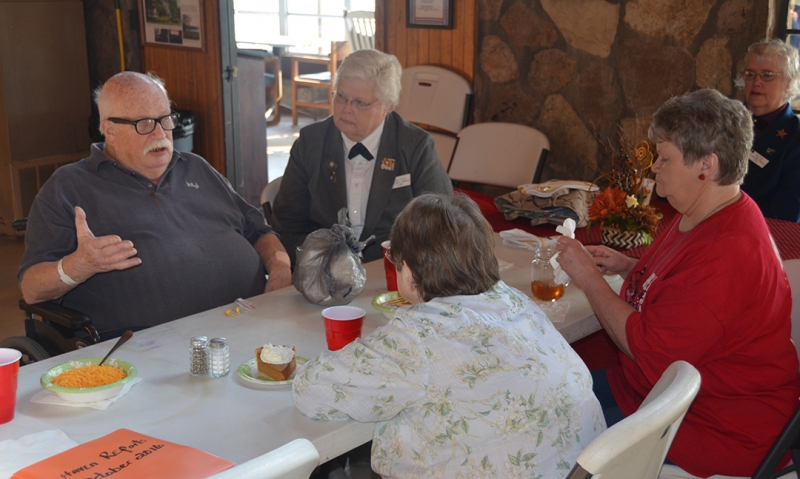 A temporary resident at the Community Living Center at the Marion, Ill., Department of Veterans Affairs Medical Center, Baulier said visiting The Haven always is a great experience.

“It brings regular life back,” Baulier said. “It’s tremendously valuable. (The volunteers at The Haven) are the nicest people you could ever meet. It’s wonderful how they treat you here.”

The EPCC – named for the area of Southern Illinois known as Egypt – was formed in 1937. A member of the club, Legionnaire Ray Hubbs, came up with the idea of creating a facility along Crab Orchard Lake that would serve as a rehabilitation program for veterans.

The site was chosen in 1947, a lease for the land was signed with the U.S. Fish and Wildlife Service, and construction began in 1948. Fundraising efforts kept the project moving forward, and in 1950 the facility was dedicated on what remains a federally protected wildlife refuge.

Since then, hundreds of thousands of veterans have used the facility, spending a day there fishing in the lake and walking outside, or relaxing inside the ski lodge-type building playing cards or pool, watching television or movie, and enjoying a meal. Each visit is a day trip, and the facility is open year-round.

Allen and Sherry Rix serve as live-in caretakers. In addition to performing upkeep on the facility, they also cook and serve meals for guests.

Sherry, a member of Auxiliary Unit 647 in Du Quoin, Ill., said the facility hosted 19 events in September and another 19 in October, serving more than 1,300 individuals. The majority of those were veterans – most from the Marion VAMC.

“It thrills me,” Sherry said of seeing the veterans’ reactions to the facility and the impact their visits have. “It’s the highlight of my month. I look forward to these guys. I love to talk to them and hear their stories. And they’re all so sweet. They’re so appreciative, but they don’t understand it’s me who’s thanking them.

“To get to live here, I get up and thank God every morning. Finding this place for us, giving us this chance to meet these vets, it’s amazing.”

The facility also is used by National Guardsmen and reservists for a “family day,” by AA groups, and by church groups. Other members of the community will use the facility for dinners and weddings; donations made by those using the facility help with the operation costs.

In addition to fundraising, donations also play a major role in funding the facility. “Donations keep coming in that keep us afloat,” Legionnaire Bill Flanagan said. “To be very honest … when something’s going on and you need money, you just put out the call, ‘Hey, we need donations for whatever,’ and they come in like crazy. Everyone is so generous.”

Flanagan, a past department commander, has served as The Haven board of directors’ secretary-treasurer since 2000 and has been involved with the facility for 20 years – though he can’t explain exactly why he has become so dedicated to the facility. “I guess it’s one of those things I got involved in, and I want to see it move on,” he said.

Flanagan said the facility has probably had eight different caretakers during his 16 years as secretary-treasurer. “Right now, we have found two very professional caretakers,” he said of Allen and Sherry. “They’re top-notch, really. It’s very critical, because you never know who may come in and want to see the place, use the place, something like that. It’s just so nice to have people who care about what they’re doing. They are passionate.”

Jeff Roscow, a member of Post 137 in Marion and senior vice commander for Illinois’ Fifth Division, said the facility has needed to “evolve with the times.” There are less long-term patients at the Marion VAMC, so now more groups from the hospital will visit The Haven.

“There are times when the mission has needed to be rethought a bit,” said Roscow, a member of the Haven’s board of directors and somewhat of a historian on the retreat. “But the core mission has always been the same: to serve the veterans in this area. That won’t change.”