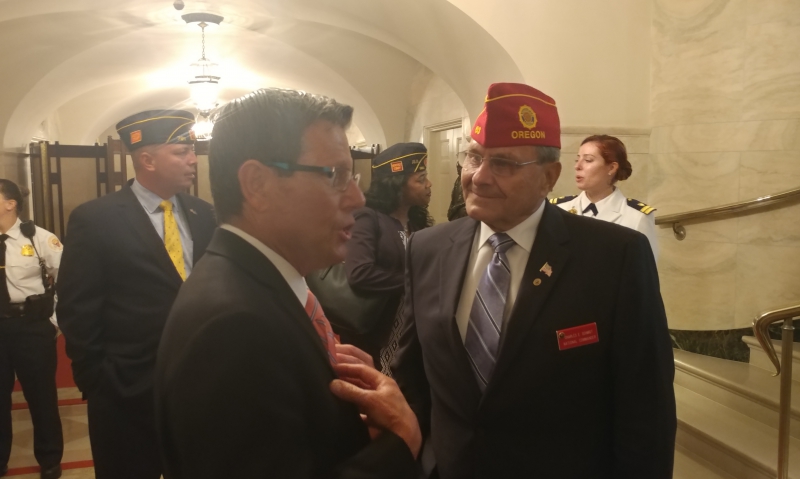 American Legion National Commander Charles E. Schmidt, along with other National Headquarters staff, witnessed President Donald Trump sign S. 1094, the Department of Veterans Affairs (VA) Accountability and Whistleblower Protection Act of 2017, into law on June 23 during a special ceremony at the White House.

“The overwhelming majority of VA workers are truly dedicated to serving veterans in a professional manner. However, we know that this isn’t always the case,” Schmidt said. “All of us who served in the military understand accountability and that’s what this new law is intended to deliver. The American Legion believes that you cannot fire your way to excellence, but the VA Secretary must have the ability to remove poor performers who are harming an otherwise excellent veterans health care system. We appreciate the Trump administration’s support in not just bringing accountability to the system but in protecting whistleblowers who shed light on areas that need to be fixed.”

The bipartisan legislation, which the House passed on June 13 following a 368-55 vote, will enhance accountability at the VA and provide the department with the tools it needs to improve the care veterans receive. It is designed to:

In addition, any appeals by senior VA executives would no longer be brought before the Merit Systems Protection Board, but instead would be handled directly by the VA secretary under an expedited timeline, according to the Senate Veterans Affairs Committee’s (SVAC) website.

“This is one of the largest reforms to the VA in its history,” Trump said. “VA accountability is essential to making sure that our veterans are treated with the respect they have so richly earned through their blood, sweat and tears. This law will finally give the VA secretary … the authority to remove federal employees who fail and endanger our veterans — and to do so quickly and effectively.”

As SVAC noted, S. 1094 also includes a number of other provisions to hold employees accountable as it:

Requires VA to evaluate supervisors based on the protection of whistleblowers;

Incentivizes managers to address poor performance and misconduct among employees by requiring the VA secretary to include this as part of the annual performance plan;

Prohibits bonuses for employees who have been found guilty of wrongdoing; and

Prohibits relocation expenses to employees who abuse the system.

“At the same time, this bill protects whistleblowers who do the right thing. We want to reward, cherish and promote the many dedicated employees at the VA,” Trump said. “This legislation also gives the VA secretary the authority to appoint new medical directors at VA hospitals – something which was almost impossible to do in the past.”

Trump said this is only the beginning and his administration will not rest until the job is 100 percent complete. This new legislation is about striving to better support and serve incredible veterans every single day, he said.

“We won’t be able to accomplish any of the reforms that we need to have in the VA if we don’t get the right people in place,” said VA Secretary David Shulkin. “Veterans deserve a VA that they can trust and take pride in. VA is a national resource that must be protected in order to serve veterans and their families for generations to come.”