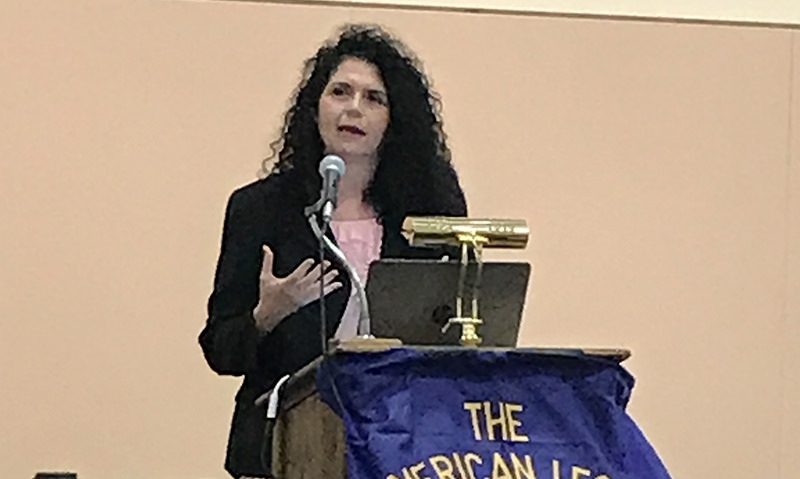 During the 2017 National Convention, cannabis researcher Dr. Sue Sisley asked The American Legion to help build support for her study.

The study, being conducted in collaboration with the National Institute of Health (NIH) National Institute on Drug Abuse (NIDA). In August during The American Legion National Convention in Reno, the doctor facilitating the study – Dr. Sue Sisley – asked members of the Legion’s Veterans Affairs and Rehabilitation Division to express their support for her study.

“We will not be able to achieve this without your help,” Sisley said. “There is no way we’ll be able to complete this study without the Phoenix VA hospital opening their doors to us. Your leadership is well aware of this problem, and they’ve been very generous in trying to help us address this issue with the hospital. But we have not made any headway.

“The American Legion has already been immensely supportive of the study, but we’ve never formalized that. In fact, this falls within the parameters of the (Legion’s Resolution 11) passed last year. I would urge you to consider endorsing the study as an organization, enabling us to have the momentum of the Legion behind the study to generation the cooperation from the Phoenix VA.”

In her letter to Shulkin, Rohan said, “The Carl T. Hayden Phoenix VA Health Care System is ideally geographically located to assist with this effort and should enthusiastically take the lead in assisting with this research study … Without the assistance of the Department, this study is in jeopardy of failing due to lack of viable test participants.”

Rohan closed the letter telling Shulkin “Your immediate attention in this important matter is greatly appreciated. We ask for your direct involvement to ensure this critical research is fully enabled.”

The text of the letter follows.

For more than a year, The American Legion has called on the federal government to support and enable scientific research to clinically confirm the medicinal value of cannabis. The National Academy of Medicine recently reviewed 10,000 scientific abstracts on the therapeutic value of cannabis and reached nearly 100 conclusions in a report issued earlier this year. As a two million member strong veteran service organization, our primary interest and advocacy is grounded in the wellbeing and improved health of our veterans, and specifically our service disabled veterans.

The Scottsdale Research Institute, outside of Phoenix Arizona, is currently in phase one of an FDA-Approved Marijuana/PTSD research study, being conducted in collaboration with the National Institute of Health (NIH) National Institute on Drug Abuse (NIDA). This study is a Placebo-Controlled, Triple-Blind, Randomized Crossover Pilot Study of the Safety and Efficacy of Four Different Potencies of Smoked Marijuana in 76 Veterans with Chronic, Treatment-Resistant Posttraumatic Stress Disorder (PTSD).

The American Legion is a strong, vocal proponent of the Department of Veterans Affairs (VA) and has published several books, pamphlets, and magazines that help showcase VA’s value to The United States of America. Our members have long been a ferocious advocate for evidence-based, complementary and alternative medicines and therapies. For decades, we have supported increased funding and research in such therapies as hyperbaric oxygen therapy, Quantitative Electroencephalography (QEEG), animal therapy, recreational therapy, meditation, and mindfulness therapies, just to name a few, to improve outcomes for veterans confronted with PTSD.

The American Legion supports VA’s statutory medical research mission and has donated millions of dollars toward expanding VA’s scientific research. VA innovation is widely championed for their breakthrough discoveries in medicine and has been recognized over the years with three Nobel Prizes for scientific work that has benefited the world over.

The research being conducted by the Scottsdale Institute is the first cannabis based research of its kind in The United States and could potentially produce scientific evidence that will enhance, improve, and save the lives of veterans suffering from post-traumatic stress disorder (PTSD). Many veterans have approached us to tell us that access to cannabis has materially improved their health and well-being. While their stories are very compelling, we need clinical evidence to have a fact-based discussion on the future of cannabis policy.

As a scientific research leader in this country with a statutory obligation to care for and improve the lives of our nation’s veterans, The American Legion calls on the Department of Veterans Affairs to assist the Scottsdale Institute, in accordance with VA’s existing policies and regulations (VHA Directive 1200 §2.b and §5.tt VHA Handbook 1200.01 §8.g and §10.a(1) VHA Handbook 1200.05 §3.xxx(note)) that states, in part;

The Carl T. Hayden Phoenix VA Health Care System is ideally geographically located to assist with this effort and should enthusiastically take the lead in assisting with this research study. There is an overwhelming body of evidence suggests that cannabis is effective in treating a number of service connected related illnesses, including PTSD and chronic pain, the two most persistent and widespread illnesses and injuries plaguing our veteran community. Without the assistance of the Department, this study is in jeopardy of failing due to lack of viable test participants. Project scientists have screened thousands of applicants, but due to the strict requirements of the study which is required to produce reliable scientific data, nearly 99 percent of these applicants are eliminated for a variety of screening reasons. This study needs 50 more participants and the Phoenix VA is in the best possible position to assist by simply allowing principle investigators to brief VAMC medical staff on the progress of the study, and by allowing clinicians to reveal the existence of the study to potential participants.

Your immediate attention in this important matter is greatly appreciated. We ask for your direct involvement to ensure this critical research is fully enabled.