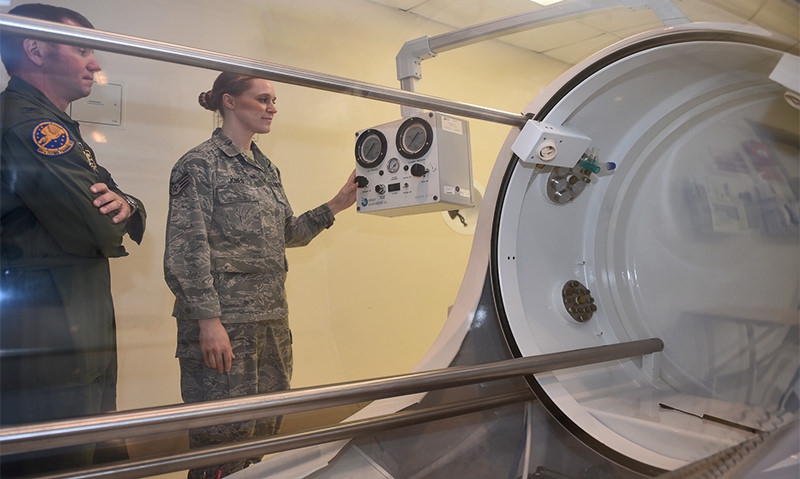 A recent Department of Veterans Affairs decision to begin offering hyperbaric oxygen therapy (HBOT) to some veterans with post-traumatic stress disorder has drawn praise from the chairman of The American Legion’s PTSD/TBI Ad Hoc Committee.

In a Nov. 29 statement, VA announced that HBOT therapies will be supervised by a physician, and that both VA and the Department of Defense are planning additional research to study HBOT’s effectiveness.

In a statement, VA Secretary David Shulkin said that his agency must “explore every avenue” and “be open to new ideas. There is nothing more important to us than caring for our nation’s veterans, and that care must include finding different approaches that work best for them.”

American Legion Past National Commander Bill Detweiler, chairman of the Legion’s PTSD/TBI committee, noted that the Legion has “urged the VA for years to allow the use of HBOT to treat veterans suffering from traumatic brain injuries and/or post-traumatic stress. Using oxygen as a drug has been proven to be successful for many veterans, members of the military and professional football players. It's another tool in the physician's tool box.”

HBOT has been federally approved to treat such conditions as decompression sickness, carbon monoxide poisoning, and to treat wounds that won’t heal because patients are undergoing radiation or have diabetes. Though it’s been studied – 32 times between 2005 and 2015, according to a Government Accountability Office – HBOT hasn’t officially been proven to work for traumatic brain injury or PTSD.

But in November 2011, The American Legion Magazine featured a story on how HBOT was helping two veterans injured by IEDs in Iraq and Afghanistan, respectively. One of those, Ret. Army Sgt. Tim Hecker, shared that, “By the fourth treatment, I started feeling like a new person. I was more aware. I could see things. The deeper I got into the treatments, my cognition started to come back - my motor skills and my balance. My vision started to improve. The biggest benefit was my emotional control."

In 2013, The American Legion released a report that was a culmination of a study on current treatments and best practices for TBI and PTSD. The report, “The War Within,” noted that at the time both VA and DoD “have not done a lot of research on alternative methods. There’s no simple answer to what works as far as PTSD or TBI is concerned, but we found that the (DoD and VA) medical profession shied away from certain things which they considered to be alternative medicine."

An example of that was HBOT, which Detweiler said at the time "works for some people. It’s not the answer for everybody, but (DoD and VA) have shied away from putting any serious money into doing studies."

And at the Legion’s 98th National Convention in Cincinnati in 2016, delegates passed Resolution 165, which urged Congress to provide oversight and funding to DoD and VA for innovative TBI and PTSD research currently used in the private sector, including HBOT and other non-pharmacological treatments.

“(HBOT) is not additive, has no side effects, is inexpensive and readily available,” Detweiler said. “It's a win-win for America's veterans.”