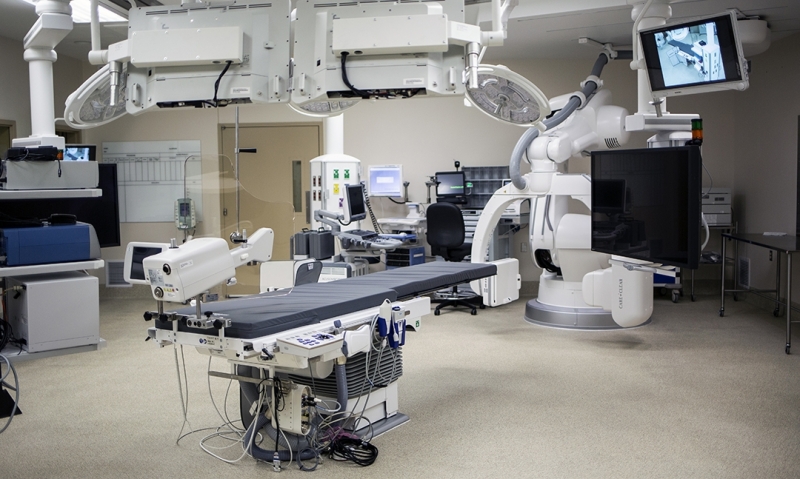 One of the surgery rooms at the new Rocky Mountain Regional VA Medical Center in Aurora, Colo. Photo by Chet Strange/The American Legion

1955 – President Dwight D. Eisenhower recuperates from a heart attack at the Fitzsimons Army Medical Center in nearby Aurora.

2002 – In August, a consultant hired by VA strongly recommends it join CU Hospital in building a single medical center. Cost to the VA is estimated at $288.6 million. In September, CU Hospital tells VA it has a year to make a final decision. VA Secretary Principi rejects the shared hospital in October, citing cost issues, problems maintaining VA’s identity and insufficient time to work out the issues.

2003 – VA, the Department of Defense and CU Hospital begin exploring a “two-tower” hospital – where one inpatient tower is owned and operated by the federal government and the other by CU Hospital – but the two still share operating rooms, labs, imaging equipment and other expensive resources.

2004 – In February, the CARES Commission ranks Denver VA Medical Center as one of three veterans’ hospitals most in need of replacement and recommends the new VA hospital be built at Fitzsimons, complete with a spinal cord injury and disease treatment center. “The timeframe for action is short,” the commission warns. CU Hospital, meanwhile, opens the first phase of its new hospital. In May, VA Secretary Anthony Principi endorses a VA hospital at Fitzsimons with separate inpatient buildings for VA and CU Hospital. CU Hospital officials and VA officials testify in support of the two-tower hospital before Congress in June. The price is estimated at $320 million. In December 2004, VA turns down the two-tower proposal.

2005 – Denver VA starts looking for other land to purchase at Fitzsimons for a stand-alone hospital and medical center. In October, the Department of Defense decides not to join VA in building a new medical center at Fitzsimons because of VA’s delays. Instead, Defense makes a deal for personnel and families stationed at Buckley Air Force Base to receive care from the CU Hospital.

2006 – In May, the House Appropriations Committee rejects request for $621 million to build a free-standing VA medical center at Fitzsimons and warns: “The Committee is concerned with the rapid escalation in the cost of building new facilities and cautions the department that few, if any, projects will be approved in the future if such costs are not brought under control.” In September, the U.S. House of Representatives and the U.S. Senate pass separate bills authorizing spending $98 million for work on a new Denver VA Medical Center. Neither appropriates the actual funds that would move the project forward.

2008 – VA Secretary Dr. James Peake quietly kills a proposal to build a new Denver veterans hospital at the Fitzsimons site with an estimated price tag of $1.1 billion and starts negotiating to lease floors in a University of Colorado Hospital building that is still on the drawing board. Once the news becomes public, The American Legion and other veterans groups condemn Peake’s plan, and Congress authorizes spending $568.4 million for a new stand-alone hospital at Fitzsimons.

2009 – VA conducts a groundbreaking ceremony for a new hospital on a piece of property it has finally purchased at the Fitzsimons site for $56 million.

2011 – Frustrated that VA still has not signed a building contract or started construction, veterans organize a shovel brigade and notify the VA they are going to assemble at the new Denver hospital site for either a protest or a celebration. The theme of the November event – Build the Damn Thing – is highlighted by veterans wearing lapel pins depicting a shovel and the letters BTDT. American Legion Past National Commander Tom Bock of Colorado, who designed the pins, accepts donations for the pins and ultimately raises $3,000 for a new Fisher House at the new VA hospital site. VA responds with a second ground breaking in November.

2012 – A contractor finally begins excavation work for the new hospital in January. By March, Kiewit-Turner, the joint venture prime contractor on the Denver VA Medical Center Replacement Project, warns the project is likely $100 million over budget.

2013 – The Government Accountability Office issues a report noting that new VA hospital construction projects in Denver, Las Vegas, New Orleans and Orlando are all hundreds of millions of dollars over budget and years behind schedule. U.S. Rep. Mike Coffman, R-Colo., proposes legislation transferring construction management from the VA to the U.S. Army Corps of Engineers.

2014 – In early December, the U.S. Civilian Board of Contract Appeals rules that VA breached its contract with Kiewit-Turner. And Kiewit-Turner walks away from the hospital project saying VA owes it $100 million for cost overruns that it had covered from its own funds to keep construction under way. Under pressure from Congress, VA agrees to allow the U.S. Army Corps of Engineers to oversee the project.

2015 – VA admits the hospital project is $1 billion over budget and Glenn Haggstrom, the agency’s construction chief, retires with full benefits and a $64,000 bonus. Throughout the spring and summer, The American Legion and other veterans groups push Congress to come up with the additional funds. This includes a veterans rally at the hospital with the theme, “Finish the Damn Thing.” Congress reluctantly agrees but insists the project be scaled back. Plans to include a PTSD treatment center and a nursing home in the new medical center complex are scrapped.

2016 – The VA Office of Inspector General issues a report in September concluding the problems and cost overruns associated with the Denver VA hospital replacement project “are primarily the result of poor business decisions, inexperience with the type of contract used, and mismanagement by VA senior leaders.” The U.S. House Veterans Affairs Committee subpoenas internal VA documents related to the construction project.

2018 – VA holds a ribbon cutting for the new Rocky Mountain Regional VA Medical Center in Aurora on July 21, as the core hospital project nears completion. By the time VA moves into the medical center, the total cost will top $2 billion – not including the PTSD treatment center and nursing home that were eliminated in order to save money. The VA Mission Act, passed in May, raises the limit on minor construction projects the agency can undertake on its own to $20 million, which should enable VA to move forward on the PTSD center and the nursing home. No date is set.