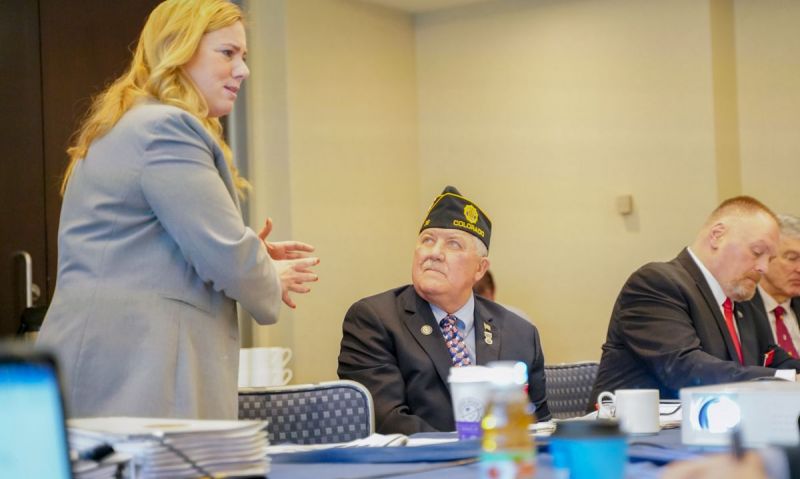 One of the missions of The American Legion TBI/PTSD Committee is to establish a suicide-prevention program. During the organization’s recent Washington Conference, that mission – and how it can translate to the local level – was one of the primary focuses.

During the committee meeting, members heard about a new Department of Veterans Affairs (VA) suicide-prevention initiative focusing on the state level. But Ralph Bozella, chairman of The American Legion’s Veterans Affairs & Rehabilitation Commission, said that while veteran suicide is a national and state issue, “suicide is a community problem. Until we get the information … at that (American Legion) post level, how can we help veterans who may have ideations of suicide or may have other mental health problems? That’s really where we need to go as an organization.

“This is a community problem. It’s a community problem that exists in homes, which means it’s highly personal. It’s personal to families. And that’s where we have to get it. There’s no way we can do that from this level. That’s why we have to get it (to the post level). And that’s where I feel we have the power to help. We’re connected in communities. If we can work together with VA – because they have the expertise, and they have the training – and we can bring something to that post level that is workable … if we are able to do that, we will be highly successful in terms of positive outcomes, if we can save lives at that community level.”

The committee also received a briefing from Dr. Keita Franklin, VA’s National Director, Suicide Prevention. Franklin discussed risks that relate to suicide: some that can’t be changed, such as age and sex, and those that can be impacted, including substance abuse, traumatic brain injury and mental health.

“But the question is, do you know how to prepare for no longer wearing the uniform socially, or no longer having unit cohesion? Now when … you’re suddenly stripped of that status … have we successfully prepared the troops for tending to the social aspects of life, where they perhaps have to be more proactive to meet a friend and find a group and identify and find a new mission and to prepare for their new mission in life.”

Franklin said one of those new missions can be a service organization. “The American Legion is a protective factor,” she said. “Traditionally, when people engage themselves in The American Legion they have friends, social support, peer support. This protects or buffers against suicide risk: when you have identity, purpose, mission.”

Franklin also discussed a new state-driven suicide prevention program. VA is teaming up with the Department of Health and Human Services’ Substance Abuse and Mental Health Services Administration (SAMSA) for the inaugural Governor’s Challenge to Prevent Suicide among Service Members, Veterans and their Families.

The initiative is an expansion of the two agencies’ Mayors Challenge, and used data analysis and their current suicide prevention initiatives to invite 10 states to participate. Seven states accepted: Arizona, Colorado, Kansas, Montana, New Hampshire, Texas and Virginia. State leaders will work together to develop a plan to implement the National Strategy for Preventing Veteran Suicide, which provides a framework for identifying priorities, organizing efforts and contributing to a national focus on veteran suicide prevention.

Franklin said teams from each state come to Washington, D.C., to get “lessons in the morning, and then in the afternoon we tell them to go into small groups and develop their plan. They will tell you what works in Colorado will not work in (other states). Everything is local.

“We talk to them about their data … not only suicide data, but completions, attempts, alcohol, DUI, divorce rates, mental health prevalence rates. And they leave with a sketch of a plan. And the goodness of the model is that afterward SAMSA has this technical assistance team … that go out and work with the teams … and help them implement locally.”

Bozella called the new initiative an opportunity for The American Legion. “This Governor’s Challenge is a pilot program in seven states,” he said. “There’s seven built-in programs that The American Legion can be involved with at that post level.”

The American Legion's Washington Conference, held annually in our nation's capital gives our organization's leadership a chance to meet with elected officials to discuss legislative initiatives and priorities important to Legion members and their families.