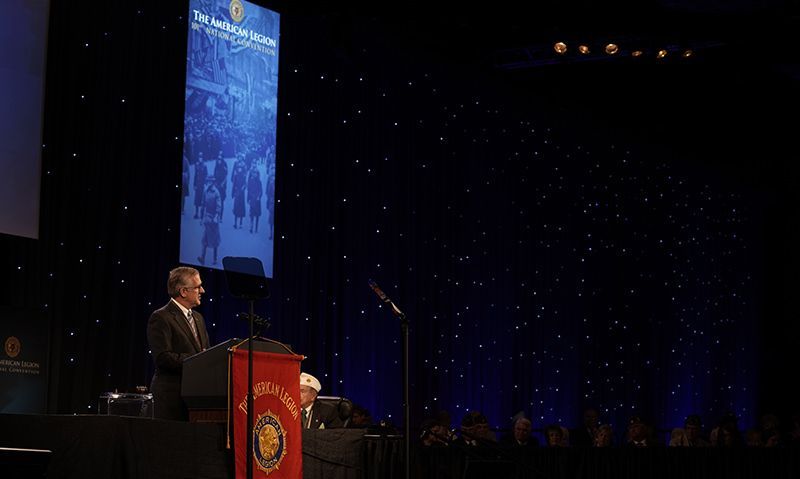 While thanking the Legion for its vigilance and advocacy on behalf of veterans, the head of the coordinator of the Department of Veterans Affairs’ community health-care program also offered up another message.

“We are not here to privatize VA. Period,” McIntyre said. “There was a time in the (Department of Defense) and with Tricare when that same conversation was going on. We opposed it then, and we oppose it now.

“We’ve all invested in VA. It needs to be strengthened. Our role is not to replace VA. Our role is not to tell a veteran what they should be doing, because the VA and veterans need to be at the core. Our responsibility to make sure that there are providers available when needed to deliver the care.”

McIntyre said that 90 percent of veterans eligible for urgent care have to drive no more than 30 minutes from their house to get access. And, he added, TriWest already has supported the making of 2 million veteran appointments across the nation in a network with 1.1 million providers. “And we’re paying our bills in less than 20 days to 98-percent accuracy,” he said. “We’re not perfect, and we’re never going to be. But we’re aiming for a very high bar. There’s a day when I want that to be in five days.”

McIntyre thanked The American Legion for both working for veterans and working with TriWest. “I came here today to say ‘thank you’ for your input, for your feedback, for your pushing,” he said. “I want to thank The American Legion … for being insistent. For being supportive. For being a teammate in this journey of ours. It has been the privilege of our life to be engaged in this work. It’s what we do. It’s all we do. It’s why we built this company.”

But, McIntyre said, “I also came here more importantly to double-down on a commitment. It’s a commitment we started with The American Legion right after the (2014 VA crisis started). The commitment was we would do our part to stay focused and flex to support VA’s community care needs. That we would forge ourselves with the input of The American Legion and other (veteran service organizations), so that VA – who is necessarily needing to be in charge – might more perfectly deliver on its responsibilities and its privilege to support the health care needs of those that have served in defense of freedom.

“That’s a commitment that I reiterated with to those that lead The American Legion at the signing of the MISSION Act. And it’s a commitment that we reiterate today, because a couple of weeks ago we were informed that we will have the privilege of continuing to serve at the VA’s side for years to come as the next-generation contractor in the (VA’s Region 4 Community Care Network).”