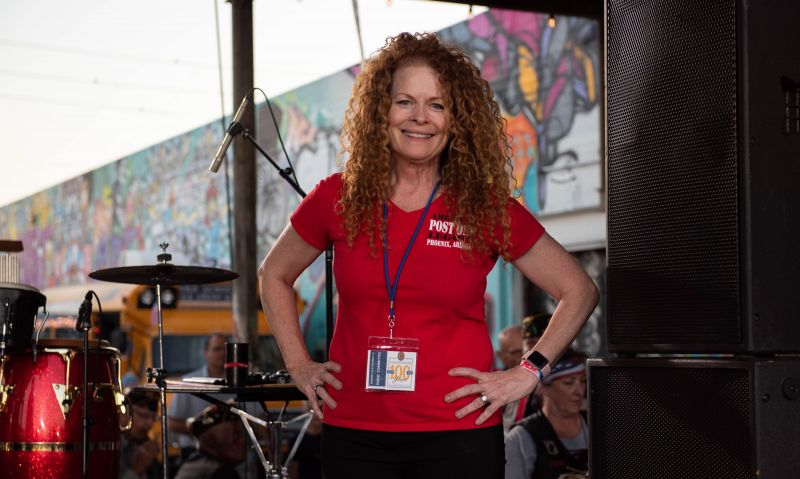 Legionnaire Julie Jennings was looking for a way to give back to veterans in Phoenix when she realized she already was in a medium that would be perfect to help her accomplish her goal.

Jennings, a member of Luke-Greenway Post 1 and Auxiliary Unit 1 in Phoenix, is the owner of Unexpected, an art gallery and event venue just across the street from Post 1. She’s taken her involvement in the art community and has expanded it to assist area veterans by providing monthly free lessons that include painting, origami and other methods of artistic expressions.

Jennings said the idea came from Unexpected’s participating in Phoenix’s First Friday, which happens on the first Friday of each month and features self-guided tours of downtown Phoenix art galleries, studios and creative spaces, with the goal being to bring together the public, artists and businesses in promotion of the arts community.

“I’m a veteran, and I like to give back to veterans,” Jennings said. “I had this idea that on First Friday we could do art classes with local instructors, including the veteran artists themselves teaching a class each week that would be free. It really was born of the fact I wanted to give back to the vets and find a way that was consistent with what we were already doing.

"We ended up doing quite a bit with the vets. We found a lot of cool local artists that were willing to (teach classes). We started an hour before First Friday because some of (the veterans) didn’t want to be around all the people. All the supplies were provided. The education was provided. And they could walk away with a tangible result of their interacting with the arts community. It really is a great program.”

Vietnam War Army veteran Art Grosch, who maintains an American Legion membership at Fred W. Stockham-St. Louis Post 4 in Missouri but is a member of Sons of The American Legion Squadron 1 in Phoenix, was one of the first to take part in the program.

“I can’t even draw a stick man,” Grosch said. “They had people showing me how easy it was to do the artwork, and it was fantastic. It really was.”

Grosch said the art lessons are therapeutic. “It gets your mind off things and lets you see you can do things,” he said. “You’re able to create. You’re artistic inside and you don’t even know it. We had two members that were in that class with us, and now they are developing their own art technique, and they’re selling their art.”

Hearing the classes make a difference for veterans “makes it all worthwhile,” Jennings said. “For me, I love to give back to this community because I know the reason we (are free) in this country.”