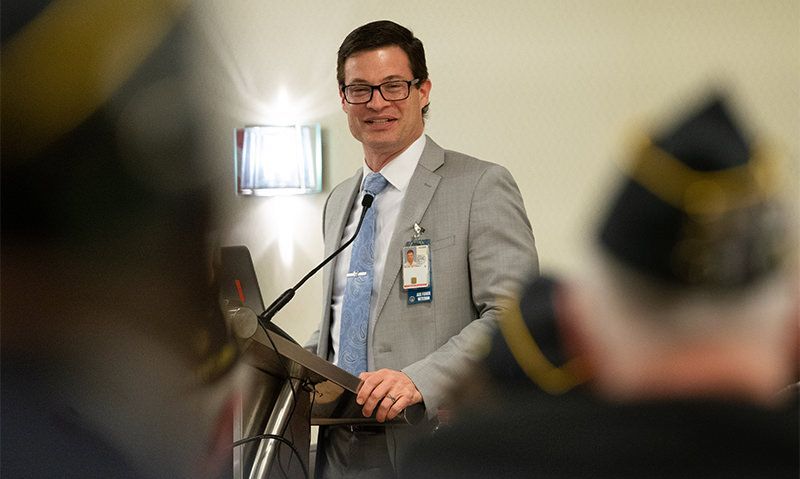 As the coronavirus continues to dominate world news, the Department of Veteran Affairs’ Richard Stone chose his address to The American Legion’s Veterans Affairs & Rehabilitation Commission to focus on that very topic.

On March 9 during the Legion’s Washington Conference, Stone – Executive in Charge of the Veterans Health Administration – updated the commission on what his agency is doing to prevent any cases showing up in a VA facility. And he also had advice for users of VA facilities.

“Don’t come if you’re sick. Stay home if you’re sick,” Stone said. “The problem with us as veterans is we don’t take time off. And people show up and say, ‘Oh, I just had a little sore throat.’ If you’re sick, don’t come. If you do come, make sure you’re following all the directions you’ve been given. Those include wearing gloves, masks, whatever they tell you to do, make sure you listen closely and you do that.

“When you come onto the campus you should be met with someone who is screening. That screening process is simply ‘how are you feeling today, how are you doing?’ And if someone is really sick, for us to route them through the appropriate entrances so that we don’t contaminate a hospital.”

Stone said that included among VA’s missions is "to be the safety net for the American health-care system, should it be overwhelmed. And frankly, the last six weeks for us at VA have concentrated 78 percent of our time – and now, pretty much full-time – on the response to the coronavirus.”

VA began prescreening individuals using any of its facilities last week in order to reduce risk. “My biggest concern is our chronic live-in facilities, our nursing homes. We have 8,450 veterans in those nursing homes – 135 sites. We are limiting visitors. We are talking about how to screen admissions to make sure that somebody from the community that might have been exposed doesn’t contaminate a nursing home. And when you think about risk, all you have to do is think about the issue in the state of Washington, where a nursing home infection has resulted in multiple deaths.”

Stone said VA has kept a cache of emergency supplies throughout the nation that are supported by VA’s 30-days of supplies for routine activities. And VA’s “are showing up,” he said. “They’re ready to do their work. They’re approaching this like they would any other mission.”

Stone said that while the virus isn’t penetrating the population tremendously, “the group at risk … is over age 70. And if you go over age 80, the information the Chinese just published shows extraordinary risk. The risk is extraordinary for the older American, as well as for those that have other health problems, like hypertension, lung disease and cancer that reduces their immune system response.”

The commission also heard from Matt Miller, the Department of Veterans Affairs’ Acting Director for Suicide Prevention. Miller spoke about the suicide of a fellow member of the U.S. Air Force, and friend, who died by suicide when Miller was in charge of suicide prevention at Vance Air Force Base. His friend’s death eventually motivated him to move out of a period when Miller said he spent most of his time in his basement on the couch.

Miller explained what he said is a “public health approach” to combating veteran suicide. “To really address suicide prevention, you need good clinically based interventions, like you need good care for depression,” he said. “But, does everyone who dies by suicide or thinks about suicide, do they have depression? No necessarily. Do they have a mental health issue? Not necessarily.

VA also is beginning a national program, “Together with Veterans,” that Miller said is more focused on veteran-to-veteran suicide-prevention care. "Veterans are trained to work within their community with other veterans for the purpose of suicide prevention.”

Miller said the distance in time between when a veteran thinks about suicide and when it actually occurs is five to 60 minutes. “What we know in the research is in that five to 60 minutes, if you can introduce and space between veteran, firearm and ammunition, you will save a life,” he said. “A lot of times people will say to me … ‘They’ll just find another way to do it.’ That is not consistent with the research or the literature. They actually won’t. And if you get them through that time period, over 90 percent … never attempt.

“So we can make a lot of progress with suicide prevention with lethal means safety and working together on ways that we can palatably introduce time and space during times of crisis for veterans between firearms and them.”