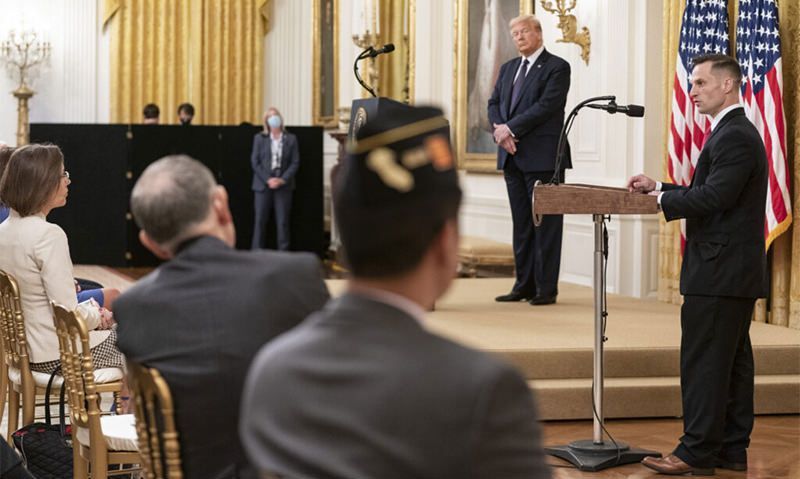 Trump unveiled the plan, which was three months overdue, in the White House on Wednesday afternoon, surrounded by Department of Veterans Affairs officials and veterans advocates. The plan is the result of an executive order Trump signed March 5, 2019, creating a Cabinet-level task force titled PREVENTS, short for “President’s Roadmap to Empower Veterans and End a National Tragedy of Suicide.”

The last annual report from the VA showed that suicide among veterans continues to be higher than among the rest of the population, particularly among women. About 20 veterans and members of the National Guard and Reserve die by suicide every day.

The first action will be a national public service announcement, which Trump described as a “historic” campaign to help end the stigma surrounding mental health. Second Lady Karen Pence, mother of a Marine Corps pilot, will be the campaign’s lead ambassador.

The plan also focuses on improved research into veteran suicide, increased suicide-prevention training and new partnerships between government agencies and outside organizations. It includes a legislative proposal that would establish a federal grant program to fund state and local groups that help veterans.

“We must do more to change the culture and conversation surrounding suicide in the public and private sectors and, most importantly, in neighborhoods across the country where the real healing work must start and end,” Roe said in a statement. “The PREVENTS roadmap shows us how, and I am confident that it will help to save and improve the lives of at-risk veterans and others for years to come.”

Democrats, though, criticized the plan for not being bold enough.

Sen. Jon Tester, D-Mont., ranking member on the Senate Veterans’ Affairs Committee, said the plan was a “necessary step forward,” but “far more” — including policy changes — needs to be done to make a real difference.

Tester and Moran have pushed legislation for over a year that would boost funding to local organizations that help veterans, as well as increase mental health staff, alternative therapies and research at the Department of Veterans Affairs. The bill, the Commander John Scott Hannon Veterans Mental Health Care Improvement Act, also builds into the law an initiative that Trump announced in 2018 to automatically enroll every servicemember into VA mental health care for one year when they transition from active duty.

Rep. Mark Takano, D-Calif, chairman of the House Committee on Veterans’ Affairs, was even more critical of the PREVENTS plan, describing it Wednesday as “meek” and “tepid.” He claimed it was developed with little input from veterans service organizations and lawmakers who work on veterans policy.

“Tepid calls for more research, interagency coordination and meek public education campaigns won’t do enough to end this crisis,” Takano said in a statement. “We have much more substantial work to do to prevent veteran suicide and ultimately help save veterans’ lives.”

Karen Pence, along with other senior administration officials who spoke on background Wednesday, said the plan came at an urgent time. The coronavirus pandemic has created more need for a national plan to address suicide, an official said.

There is a way forward.”

The VA’s budget request for fiscal 2021, released in February, includes $53.4 million to the PREVENTS initiative.