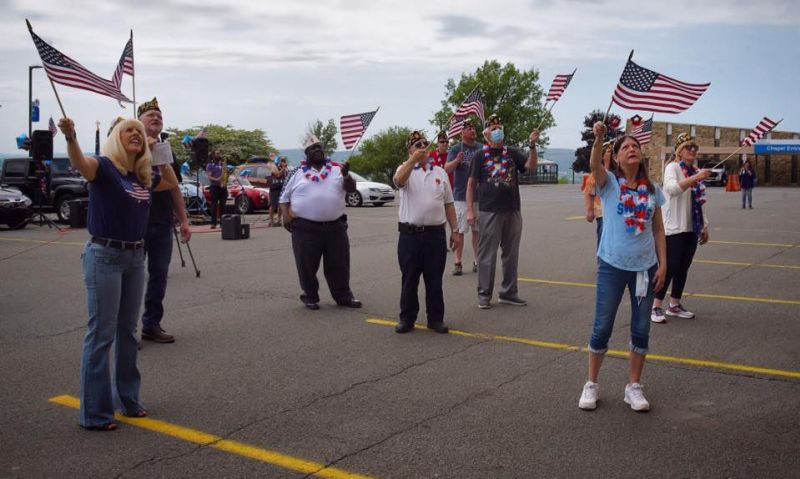 The American Legion Family in Pennsylvania’s District 12 has made it a point to ensure the patients and residents – including those in hospice or palliative care – at the Wilkes-Barre VA Medical Center feel loved and appreciated. For seven years the Legion Family members have provided holiday parties at the facility that include food, entertainment, presents and camaraderie.

With the COVID-19 pandemic hitting Pennsylvania, the in-facility parties came to an end. But the Legion Family’s show of appreciation and affection for the VAMC’s residents has not stopped. Since late April, District 12 has staged outdoor salutes at the facility that have included concerts and Legion Family members holding up signs of appreciation.

District 12 was there for Memorial Day and, most recently, came to honor the dads at the VAMC on Father’s Day – all while observing proper social distancing. District 12 Canteen Fund Representative Nicole Guest wasn’t going to let the pandemic stop her and the American Legion Family from performing what she feels is a critical mission.

“My mind has been reeling since (the coronavirus) happened: how are we going to see (the VAMC residents),” said Guest, a Navy veteran and member of American Legion Post 350 in Nanticoke. “I thought, ‘This is what we’re going to do once a month. We’ve got to start doing something to give them something to look forward to each month.' And they just love it.”

Guest said she got positive feedback from the VAMC’s staff immediately after the first event in April. “The texts and emails from the staff – they’re like, ‘Nicole, it brought up the morale, the spirits,’” she said. “They told me the vets were tapping their feet in the bed listening to the music.”

A large banner strung between two ladders spelled out “Happy Father’s Day” during the most recent show of support for the facility’s veterans. Patients and residents of multiple sections of the VAMC watched and listened through cracked windows as music played.

Legion Family members also Skype with the residents and arrange for the media to interview them. “They love to be interviewed,” Guest said. “It’s their connection to the outside world. The VA told me they all stayed up until 10 p.m. (on Father’s Day) to watch themselves on Fox 56 News.”

The cost to put on the events come from the district’s Canteen Fund. Guest said that the district's American Legion Riders raise "thousands of dollars, while most of the 29 posts in the district also contribute. “The ones that don’t have a lot of money are phenomenal in volunteerism,” Guest said. “Everybody does a part.”

The plan is to continue the outdoor events until coronavirus restrictions are lifted at the facility. “These guys have become our family,” Guest said of the VAMC residents. “Doing this makes me feel like I’m the luckiest girl in the world that Jesus put me on this earth, and this was the path for my life. I love them. They are our family. When they hurt, we hurt. When they’re sad, we’re sad.

“To be able to do what we do for our comrades is the most wonderful feeling in the world in our hearts.”