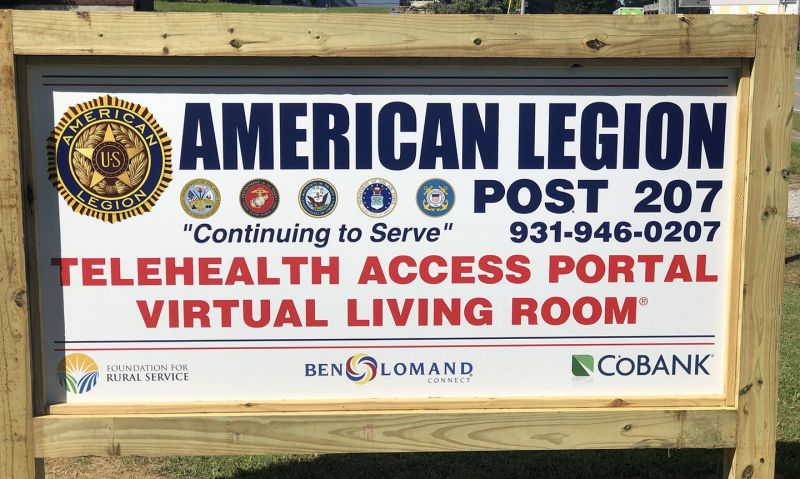 Credit members of American Legion Post 207 in Spencer, Tenn., with the gift of foresight. When planning a renovation of the post’s 40-year-old building around a year ago, the membership decided to include space to allow for telehealth space for use by veterans in the rural area.

That was well before a pandemic enveloped the world, forcing stay-at-home orders across the country and changing the way Americans go about their daily lives – including seek healthcare. But thanks to Post 207 and its relationship with other entities in the community, the 600 or so area veterans will have the option to see their own health-care provider via the post’s Telehealth Access Portal (T.A.P.)

“Where we live, we’ve got 6,000 people in the entire county,” said Post 207 Commander Hansel Moore, who served in the U.S. Air Force from 1985 to 1993 and has a nearly 30-year career in nursing. “Ten percent of our population is veterans. I’ve watched telehealth really kind of expand, and where we live, for a lot of our veterans to go to (a medical appointment), it was almost an hour to two-hour drive. I’ve been working with a number of the local hospital systems, and they’re all going live with telehealth. I said we need to be able to have a place where (veterans) can come to and attach to their health-care provider.”

But when the coronavirus hit, “it stopped everything,” Moore said. “I started talking to the team that was putting it together and I said ‘You know what? This is actually the time when we need it the most.' We stepped on the gas pedal and got everything done.”

Through Moore’s collaboration with Ben Lomand Connect CEO Lisa Cope, Post 207 received a Foundation for Rural Development grant that was sponsored by CoBank, while a 5G broadband connection was donated and installed by Ben Lomand Connect. It’s an impressive feat, considering that Post 207 was once down to around nine members but has grown to more than 60 in a little bit more than a year.

“It’s all been on donations,” Moore said of the T.A.P. project. “It is all about relationships. And we already have three other posts lined up in middle Tennessee to get the equipment (for T.A.P.) installations. I believe we’ll have four other posts online by the end of the year.”

The renovation finished in April, and six months later Post 207 was able to join with others for an Oct. 1 ribbon-cutting ceremony for the T.A.P., the first of its kind in a Tennessee American Legion post. The ceremony included American Legion Department of Tennessee Commander Luther Holsonback and other state Legion leadership, State Sen. Janice Bowling, Van Buren County Mayor Greg Wilson, Spencer Mayor Mickey Robinson, representatives from Ben Lomand Connect and health-care officials.

The T.A.P. is open to any Van Buren County veterans, regardless of whether they are Legionnaires, and can connect them with any health-care systems or providers utilizing telehealth. “We would like for them to become Legion members to help strengthen our voice for veterans’ issues, but it is not a prerequisite to utilize this service,” Holsonback said during the ribbon-cutting ceremony. “It is open to all veterans.”

Via press release, Foundation for Rural Service Executive Director Pam Becker said that for veterans living in rural areas, distance to health-care providers “can make access to adequate health care difficult. Broadband, however, can help shatter these barriers and result in improved health outcomes. We could not be more thrilled to bring this opportunity to veterans in and around Spencer.”

Moore said he expects the T.A.P. to have three to six visits a week. Making the community aware of the effort through the ribbon-cutting ceremony “was huge,” Moore said. “For me as a nurse, medically and clinically, it’s going to be a great asset. It is my observation and belief that telehealth services are the future of health care, and we are proud to be a part of that future.”