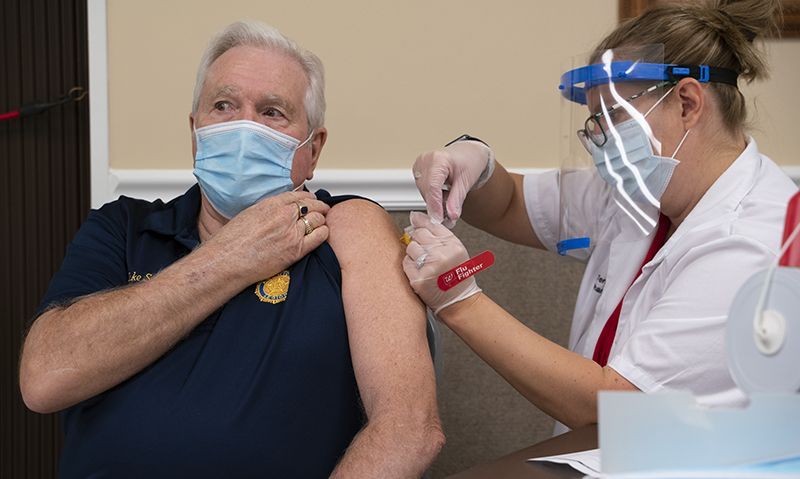 For 25 years Byron Cox American Legion Post 72 in Crawfordsville, Ind., has put on a Veterans Expo that brought together local veterans with a variety of vendors – health-care professionals, American Legion service officers, educators and others – filling the post.

The coronavirus pandemic meant Post 72 would need to alter this year’s expo, but for Legionnaire Mike Spencer, one aspect needed to remain in place: flu shots for veterans. Teaming up with Walgreens, the post was able to provide 74 veterans and their spouses with the free shots during a scaled-back Veterans Expo from 9 a.m. to noon Oct. 15 at the post. Those ages 65 and over were given the opportunity to receive a high-dose shot; 50 took advantage of the offer.

“We talked it over with the (post executive board), and I expressed my desire to give the shots … but due to the pandemic, I thought we should do away with the vendors this year,” said Spencer, Post 72’s third vice commander and the expo’s chairman for the past five years. “Getting shots for our veterans was our most important thing.”

“That’s what we were trying to express to everybody,” Spencer said. “Due to the pandemic and (flu season), we were trying to encourage to come in and get their flu shots with their spouses. It’s one of these years you need to get the shot.”

Spencer said previous expos included a multitude of vendors from hospitals, colleges, nursing homes and an American Legion Department of Indiana service officer. “We just have all kinds of things if any of our veterans have any issues or need any education or advice on anything,” he said. “We’ve got it right here. It’s just grown over the years. We have so many vendors that want to take part in this. They know it’s a good thing and know that we have a good crowd. It’s worked real well. I think it keeps veterans up with what’s going on."

Social distancing was required during the expo, as was wearing a mask. Past Department of Indiana Commander Rodney Strong, now serving as Post 72’s commander and a 31-year Legionnaire, said he and Spencer realized cancelling this year’s expo would have been a mistake and were willing to take any necessary safety measures.

“We decided this was what we needed to do, and we wanted to limit it to who came and who the vendors were,” said Strong, who also has been in the Sons of The American Legion for 57 years. “We still wanted to do this. It was very important to us.”

Apart from the health-care aspects, Strong said the expo also provided a safe break from stay-at-home situations and limited contact with others. “Some of (the veterans) … maybe once in a year this is where they see each other,” he said. “So it’s a little bit of camaraderie.”

Post 72 member Maj. Gen. Bruce Bowers, commander of the Indiana Guard Reserve (IGR), and his wife Bev came by the post for their flu shots. Bruce, who served in the U.S. Army from 1970 to 1976 and has served in the IGR since 1981, said being able to get the shots “is very convenient. I’ve got my shot here for probably the last five or six years.”

The 48-year Legionnaire said Post 72’s dedication to offering the expo in the midst of the pandemic is emblematic of what the post provides to its community. “They provide a lot of different services,” said Bowers. “It’s very nice.”