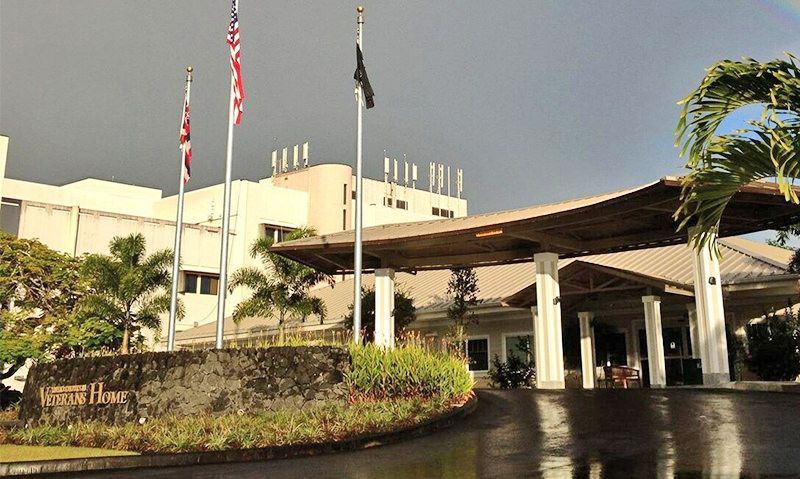 A COVID-19 outbreak that struck a state veterans home in Hilo, Hawaii, in late August has infected a majority of the residents and led to the deaths of at least 27 veterans and spouses. It’s a stark reminder that the pandemic, now entering its ninth month, continues to devastate long-term care centers.

Although the Yukio Okutsu State Veterans Home restricted visitors almost from the beginning, it was slow to adopt testing and infection control measures that may have helped keep the novel coronavirus at bay, says David Carlson, National Executive Committee member for The American Legion Department of Hawaii.

“It’s a sad situation,” he says. “If they had followed the procedures right off the bat – and gotten testing right away – they might have been able to contain it.” But Carlson also faults the state for not taking much of an interest in the veterans home until COVID-19 took hold. “The state, VA and the company never did anything until it was too late,” he says.

State and federal inspectors also raised questions about the veterans home’s pandemic response prior to the outbreak. “There was very little evidence of proactive preparation/planning for COVID,” a VA assessment team reported Sept. 12. “Many practices observed seemed as if they were the result of recent changes. Even though these are improvements, these are things that should have been in place from the pandemic onset and a major contributing factor towards the rapid spread.”

VA also provided a 19-person team to help deal with COVID-19 from Sept. 17 to Oct. 12, including nurses and specialists in infection control, industrial hygiene, housekeeping, logistics and emergency management.

The Avalon Health Care Group has run the veterans home under contract with the State of Hawaii since 2007. The Utah-based company manages 50 skilled nursing and assisted living facilities in six western states, including four state veterans homes in Utah and one in Nevada.

Avalon has been fined nearly $30,000 for issues at the Yukio Okutsu veterans home since 2017, according to inspection records from The Centers for Medicare and Medicaid Services. The federal agency cited the company for failing to supervise a veteran patient with dementia who wandered three miles from the facility. Other incidents include a resident falling out of bed and fracturing his hip while a certified nursing assistant was changing his clothing, and a certified nursing assistant leaving a resident alone in the shower for 15 to 20 minutes.

The company says it took early “robust action” to protect the residents of Yukio Okutsu State Veterans Home from COVID-19, including restricting visitors. “The facility has implemented all the guidelines of the CDC and CMS since the start of the pandemic in March and have modified its processes as those guidelines have changed,” says Peter Cooke, a retired major general in the Army Reserve who serves on Avalon’s board. “Unfortunately, extensive independent research shows that once the virus begins circulating at a high rate in a community, as it did in Hawaii this summer, it is all but certain to infect long-term care facilities. In the face of this threat, our staff has continued to perform heroic work to protect the veterans in their care, and we are working closely with VA and our other partners to ensure we are doing everything possible to save lives.”

The first signs of COVID-19 infections surfaced Aug. 20 when the Hilo Medical Center asked the state veterans home to participate in the hospital’s random COVID-19 testing program, according to a Hawaii Emergency Management Agency inspection report. Two veterans home staff members went home that same day – one whose daughter was COVID-19 positive and another who reported feeling sick. A few residents of the state veterans home also may have been exposed to the novel coronavirus at an off-site dialysis center, according to the state report.

Once inside the veterans home, the virus spread rapidly. By Sept. 6, when U.S. Sen. Brian Schatz, D-Hawaii, called for VA to help stop the outbreak, 46 residents and 18 staff members had contracted COVID-19, and five residents had died. As of mid-October, 71 of the original 89 residents and 35 staff members have tested positive for COVID-19. Forty-four residents have since recovered.

Other state veterans homes, particularly on the East Coast, have also struggled to protect their residents from the novel coronavirus. In late September, Massachusetts charged the former superintendent and former chief medical officer from the Holyoke Soldier’s Home with abuse and neglect in connection with the deaths of 76 veterans from COVID-19. And on Oct. 16, New Jersey Gov. Phil Murphy fired the chief executives at the Paramus and Menlo Park state veterans homes after it was reported that a total of 193 residents have likely died from COVID-19 at the two facilities – 47 more than had been previously acknowledged. Murphy also replaced the two top leaders at the state Military and Veterans Affairs Department.

California, on the other hand, continues to have one of the best track records. Just eight of the 2,100 residents of its state veterans homes have contracted COVID-19, and only two have died. In addition, 82 of the approximately 2,300 employees at CalVet’s eight veterans homes have tested positive for COVID-19, and one has died. CalVet took steps to prevent COVID-19 infections beginning as early as February.

Overall, nursing homes are blamed for about 40 percent of all known COVID-19 deaths in the United States which now top 220,000. Veterans homes appear to have been hard hit by the outbreak. But a lack of comprehensive data about COVID-19 infections in federal, state and private nursing homes makes it difficult to compare how each is handling the infections.

The National Guard has been tapped to provide assistance in many of these locations. By mid-October, the Guard had added more than 15,500 beds to assisted living centers, VA facilities and other care centers, says Wayne V. Hall, National Guard Bureau spokesman. The Guard had also tested or screened 10.5 million people, and disinfected 8,271 long-term care facilities, nursing homes, correctional facilities, VA centers, shelters and other public places to prevent the spread of COVID-19.

Meanwhile, the ongoing toll in long-term care facilities is troubling, says Charlene Harrington, professor emerita of nursing and sociology in the University of California San Francisco School of Nursing who has studied nursing homes for 30 years. “It’s shocking to see outbreaks still happening. So the only conclusion is that homes are not testing staff frequently enough, that the homes are understaffed and don’t have enough registered nurses, that they are not wearing personal protective equipment and following infection-control guidelines – or all of these things.”

Harrington also expects COVID-19 infection rates to increase at nursing homes as the weather gets colder and people move indoors, a problem likely to be compounded by the onset of flu season.

In Hawaii, meanwhile, Avalon’s contract to run the state veterans home in Hilo is expected to end Jan. 1. The company says it is “working cooperatively” to transition management of the facility to a state agency known as the Hawaii Health Systems Corp.

Now it’s a matter of watching and waiting, Carlson says. “I don’t think there’s much more that can be done,” he says. “All we can do is look at it and see what happened and try to keep it from happening to anybody else.”