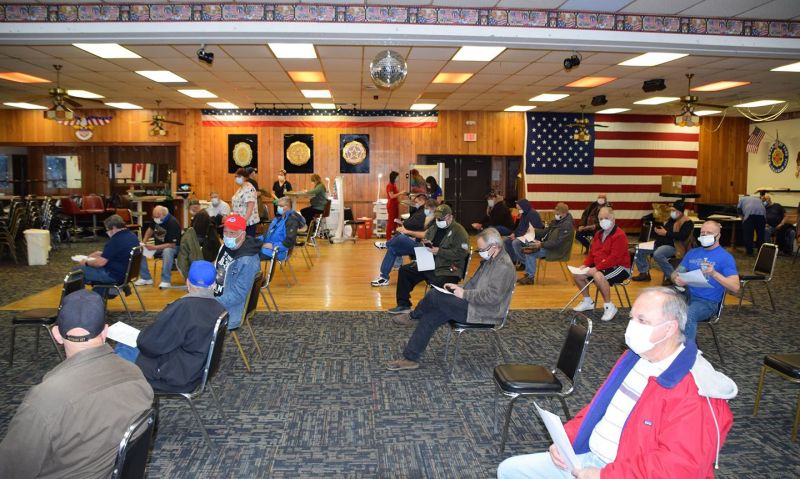 American Legion Herman Kent Post 777 in Jamestown, N.Y., already had a strong relationship with the VA Western New York Healthcare System (VAWNYHS) prior to the coronavirus pandemic. But both entities recently expanded that relationship in an effort to get as many COVID-19 vaccines out to area veterans.

The VAWNYHS has been administering vaccines since January and in March embarked on what is being called possibly one of VA’s largest rural outreach efforts ever by coordinating vaccine sites throughout the area.

When VA officials reached out to Post 777, they quickly found another site willing to host a vaccine clinic. “They called us up … and asked if they could use the (post) as a vaccine clinic, and I said ‘sure, why not? We’re here to help the veterans anyway,” Post 777 Commander Neville Messenger said. “We’ve got probably the biggest post here in Chautauqua County than anybody else. We’ve got approximately 17,000 square feet.

“(VA officials) set it up for a Sunday. They set up appointments for everybody. We ended up doing 720 vets in one day.”

Sean Lindstrom, VAWNYHS’ COVID-19 vaccine coordinator, told The Post-Journal the Post 777 vaccine clinic was a “pretty well-oiled machine where they are only on site for 20 minutes, 25 minutes tops. We are able to flip these veterans through very quickly and receive a high number of patients through. What we heard on Friday was that this was going to be the largest rural outreach that the VA has ever done. Not VA Western New York, but the VA in general, which we are tremendously proud of. So thankful to be partnering with the folks here at the American Legion post to help us pull this off.”

“I’ve always believed The American Legion is supposed to be there to help the veterans,” Messenger said. “I think that it’s great we were able to help them. It saved a lot of the elderly veterans … to not have to have them drive clear to Buffalo to get a shot, which is an 80-mile drive each way.”

Montana Post 1 Providing 100s of Vaccines. In Butte, Mont., more than 200 veterans received their first dose of the Moderna vaccine in February, thanks to a collaboration between the Montana VA Health Care System and American Legion Post 1. The Montana VA is conducting vaccination clinics throughout the state, and Post 1 was an ideal spot to set up one.

“It’s community support, and also outreach for our elderly veterans,” Post 1 Commander Dave Haulman said. “Montana has the second-highest per capita for veterans, and in Butte we have a lot of geriatric veterans. Butte’s kind of a central point … for the surrounding areas, and so they can come here (and get vaccinated). And we have an expanded facility that can handle that type of influx of people.”

A similar effort is planned for March 25. So far, around 400 veterans have been processed. Those who already have gotten vaccinated “have been happy about it, especially a lot of our elderly veterans,” Haulman said. “It’s been a real positive response.”

Providing Both Information and Vaccinations. In Fort Myers, Fla., American Legion Post 38 wanted to clear up any misinformation veterans may have about the COVID-19 vaccination, so the post hosted a question-and-answer session March 10 that featured information provided by Joseph Scotchlas, the associate director for the Bay Pines VA Healthcare System.

Veterans were told how to enroll in the VA health-care system, and provided information about the availability of vaccines and any future vaccination dates. Post 38 will host a vaccine clinic April 3 for 50-100 veterans.

Boyd said the post has been working with local officials to identify homeless veterans in the area. A portion of the April 3 vaccines will be set aside for those veterans.

“It’s not their fault they're homeless,” Boyd said. “We need to do something to get them the vaccine as well.”

The post’s vaccination effort is a continuation of its work during the pandemic. Since last March, Boyd said the post has collected around 500,000 pounds of food that was distributed to the community. “That’s why we’re here,” he said. “It’s what The American Legion is supposed to be doing.”

The following are a few more examples of American Legion posts opening up their doors to serve as COVID-19 vaccine sites. If your post is doing something similar, let us know by emailing sbrooks@legion.org or sharing it at www.legiontown.org.

• The VA Boston Healthcare System recently set up mobile vaccine teams at various sites to distribute the vaccinations quicker. William Carter American Legion Post 16 in Mattapan served as one of the sites March 17.

• In Plymouth, American Legion Post 40 served as a vaccine site on Feb. 27 for veterans 55 and older and enrolled in VA. Shots were administered by VA staff.

• The Truman VA Medical Center’s Centralia Veteran Vaccine Clinic Bus Tour made a March 12 stop at Emmette J. Shields American Legion Post 55 in Hannibal. Those eligible for VA health care were provided a free vaccine. "I think it's very important to get these shots to these veterans,” Past Post 55 Commander Jess Ornelas told WGEM. “I've run into a couple already who just don't like to go to the hospitals, so it's very important so they can get well.”

• The Kansas City VA Medical Center conducted first-dose vaccine clinics for enrolled veterans in several communities in and around Kansas City, March 10-15. Matthews-Crawford American Legion Post 131 in Warrensburg served as one of the sites.

On March 7 in Albany County, N.Y., hundreds of residents were vaccinated during a mobile clinic at North Albany American Legion Post 1610. The effort was a collaboration with county officials.

In Jacksonville, American Legion Post 265 has served as a vaccine site for Star Med on multiple occasions, first to healthcare workers and those 65 and over, and later to an expanded eligibility group. Hundreds have received a vaccine through the post’s facility, which will serve as another vaccine site March 20.

When the Milwaukee VA Medical Center expanded its vaccination effort to those enrolled veterans ages 60 and over, the center set up walk-in clinics that included American Legion Post 82 in Port Washington.