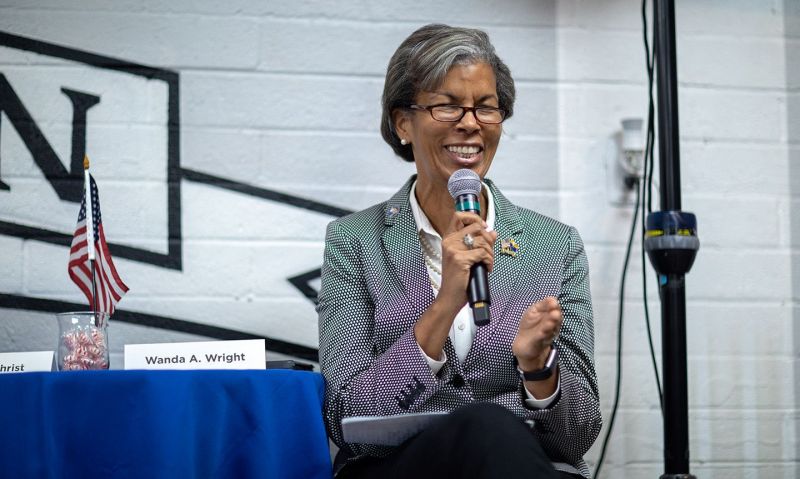 Growing up in Detroit, Dr. Edmond Baker was shot at six times before he joined the Army.

“There are people next to you living with trauma that you don’t even recognize,” said Baker, now the medical director for Equality Health in Phoenix.

He understands and relates to combat veterans who face post-traumatic stress disorder, especially those from the Global War on Terrorism.

He was among the panelists at a special American Legion Department of Arizona summit that focused on mental health issues and the aftermath in Afghanistan. More than 60 people attended the event on Nov. 9 at Travis L. Mills Post 65 outside of Phoenix.

Arizona ranks 13th among the states in the population of veterans.

“We have a strong contingent of veterans here who need help,” said Alan “A.P.” Powell, a member of Post 65 and chairman of the HeroZona Foundation. “We put this group together to explain to them the resources they have. It’s our obligation to those who served our country to help them fulfill their mission after their military service.”

“There has been an undue amount of stress these past few months after the Taliban retook control of Afghanistan after U.S. troops withdrew,” Headen said. “The speed of the Taliban’s resurgence made it even more shocking. It also rekindled memories for our veterans, especially those from the Vietnam era. Those who served in Afghanistan were — and still are — concerned about the fate of their beloved interpreters and other allies who helped.”

Headen, an Air Force veteran, also noted the recent 20th anniversary of the 9/11 attacks. “For veterans, these events can be upsetting. It is no secret that the veterans suicide rate is outrageously high, estimated at 20 or more per day. Just one veteran lost a day is too many.”

Headen’s program for his year as department commander is Operation 22, healing post-traumatic stress disorder through music. His theme is “One Team, One Goal, One Heart, One Soul.”

The mental health summit was a perfect fit.

“I want the attendees to walk away with the understanding that they realize there is a place in the community to come,” Headen said. “Veterans can walk through these doors, feeling down or in the dark, and feeling like there is no place to go. He or she can walk through these doors and realize they have brothers and sisters who served and can give them that one moment of hope that they need to move on and continue in life.”

Joining Baker were other panelists, including retired Air Force Col. Wanda A. Wright, director of Arizona Department of Veterans Services.

She also noted the importance of getting veterans into the VA health-care system. Only about three in 10 veterans are enrolled.

“Not everybody understands they are eligible for VA benefits or state benefits,” Wright noted. “We need to get out there so every veteran understands what it out there for them.”

Shilo Catlett, another panelist, is a program manager for post-9/11 veterans at the Phoenix VA Health Care System. In her role, she works exclusively with veterans who are transitioning from service. They are often experiencing PTSD, loneliness, insomnia, depression and other similar issues.

Summarizing what veterans experience in their voice, she said, “I served right next to my brothers and sisters. I lived with my best friend for years. I woke up, knew exactly what I was doing. And now, I don’t.”

Catlett emphasized it’s important to connect with those veterans, understand their needs and help them identify a new mission that is important to them now.

“The big thing is that connectedness, that mission, that purpose,” she explained. “Then we can  address the housing, employment and relationship concerns so that we can also address the mental health issues that are being brought up.”

Powell said Post 65 has hosted similar events before but this was the first one related to the Afghanistan situation. It likely will not be the last.

“I want them to understand The American Legion cares and the community cares,” Powell said. “And we work to consolidate things like this and make them cohesive so that they have information that will help them and loved ones. After all, if you are a spouse of a veteran, or child of a veteran, you served too.”

Baker talked about “keeping them on the horizon,” referring to at-risk veterans.

“As long as the person you are caring for is in your view, you will remember them. They are your battle buddy. Keep them in front of you.”

He also noted the importance of educating family members and other civilians.

“We need to help the public understand depression, recognize anxiety and know when they see people who are at-risk for suicide,” Baker said. “Remember, we are all on a continuum so we are all at-risk.”