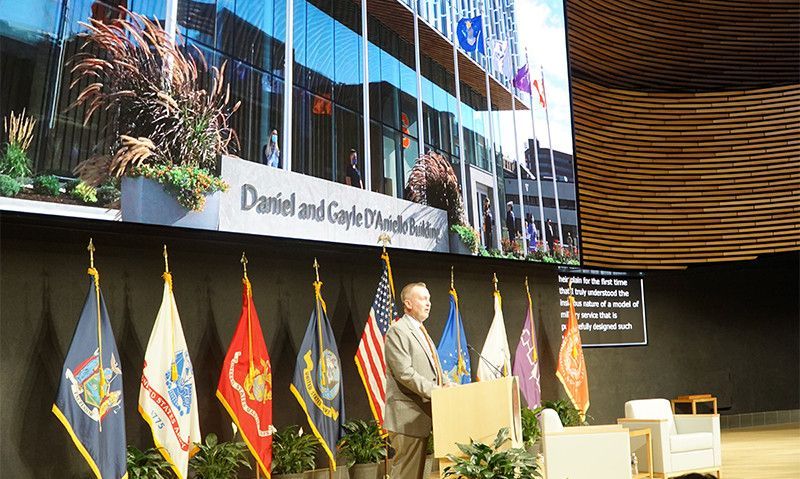 Central New York American Legion members Lawrence L. Behling and James R. Bass, both of whom served in the U.S. Armed Forces during the Vietnam War, considered for a moment Wednesday the transition-support system available to them when they were discharged.

“There was no support mechanism,” said Behling, a Navy corpsman from 1970 to 1976. “The VA hospital was here. We checked at the VA hospital when we got discharged to see if we were eligible for anything. Then, we stopped at an American Legion post and signed up and talked there.”

“It was kind of terrible for me,” said Bass, who got out of the Air Force in 1967 and later served in the New York Air National Guard. “Especially for African-Americans, it was very difficult for me to get a job, even though I had a college education.” Now the Onondaga County American Legion commander, Bass, who used the GI Bill for three college degrees, is optimistic about the brand-new $62.5 million National Veterans Resource Center that was officially opened Wednesday on the Syracuse University campus.

“I think it’s fantastic,” he said, adding that he is looking into ways to better connect The American Legion locally with the national center.

Bass and Behling joined hundreds who filled the K.G. Tan Auditorium for two hours of celebration, reflection, a challenge from the university president, greetings from former U.S. President George W. Bush, a Q&A session with Medal of Honor recipient Britt Slabinski and multiple reasons from the program’s founder why such a center is necessary today for America.

Syracuse Vice Chancellor for Strategic Initiatives and Innovation Mike Haynie planted the seeds for the center with one small program in 2006, which evolved into the JP Morgan Chase-funded Institute for Veterans and Military Families (IVMF) in 2011. More than 150,000 veterans and military-connected families have since been served by the institute, with emphasis on education and entrepreneurship, but with multiple other arms, including nationally respected and applied research on veterans, benefits services, ROTC support, mental health programs and more. The IVMF now reaches veterans across the country and at active-duty military installations in eight different nations.

U.S. Small Business Administrator Isabella Casillas Guzman, which recently presented a $5 million grant to the NVRC, spoke of the importance of advancing veterans in business education and careers. “The impact that veteran small business owners have in our economy is great,” she said. “There’s 1.76 million small businesses owned by veterans in the United States, and one in 20 employer firms are veteran-owned. They have 4 million employees that they support. They contribute over $1 trillion to our economy. They have a true impact on our communities.”

The institute’s success record – including a 92% business survival rate for its veteran entrepreneurs – led to creation of the National Veterans Resource Center, which has been operating for over a year, awaiting Wednesday’s celebration that had been delayed 18 months by the COVID-19 pandemic.

The biggest question Haynie said he has heard during the last 15 years is, “Why create an academic facility focused on veterans and their families? When I hear that question and read between the lines, I think what I am really being asked is, ‘Why should I care?’”

“First, we should care because, if I can borrow a quote from Thomas Jefferson, ‘A nation, as a society, forms a moral person. And therefore, every member is morally responsible for society.’ I can’t imagine a more morally troubling decision that a society can make than a decision to wage war. Following Mr. Jefferson’s logic, all members of that society are morally accountable for the costs and consequences associated with that decision.”

He noted that with less than 1% of the U.S. population serving in the military, most of society is disconnected from what it means to serve, especially in wartime. “For the small minority of Americans who fight those wars, when they come home and require some care and support, those needs are too easily dismissed,” he said.

Through the center, Syracuse University is fulfilling what he calls a “citizenship obligation” to the minority of Americans who step forward to protect a nation that rarely understands them, when in uniform or afterward.

Haynie recounted a story at an airport after two young uniformed soldiers were applauded before they took their seats on a plane. When one passenger was especially zealous in her cheers, Haynie asked her if she understood that veterans were confronting severe job-placement issues, mental health problems and high suicide rates. She did not believe him. Everyone had just shown the soldiers so much appreciation and was certain all veterans received similar, unqualified support. He explained that difficulties most often come after the uniform is put away.

A young Marine Corps veteran named Tim, seated behind Haynie, had heard the conversation and thanked the Syracuse professor.

Tim had served five years, three of which in combat theaters. Once out, Haynie explained, “his plan was to go to school and get a degree. He seemed ashamed to tell me that he lasted two months on his college campus. He said he just didn’t fit in. He had been trying to find a job but no luck so far. And he was on his way to a VA hospital in a different city hoping that the doctors could help him stop the ringing in his ears so he could get more than a few hours of sleep at night.”

Most significant in Haynie’s opinion, was that Tim sadly admitted, “Since I’ve been home, I feel anonymous.” A combat veteran is telling me that in the context of all the hardship he has endured, and will in the future, what weighs upon him most now that he is home, among the very people who sent him to war … is that he feels anonymous.”

While assisting veterans and military-connected families with career transition is a key purpose of the center, an underlying theme is bridging the gap of understanding between veterans and those who never served.

The commitment to welcome and support veterans, Chancellor and President Kent Syverud said, has made Syracuse a better school. “In the last decade, Syracuse University has become a place where academic research and education and outreach come together to benefit those who have served,” he told the crowd. “We have been formally recognized as the best private university in the United States for veterans and military-connected service members and their families. Along the way, we have discovered that serving veterans and military families makes Syracuse University better in countless ways. In becoming the best private university for veterans, we are now a different, better and more diverse university that has so much more to give to the world.”

The next decade, he added, presents another opportunity.

“The question is, ‘What’s next after 10 years of coming so far?’ I have a realistic suggestion and challenge. It’ll take a lot of work. It’ll take the support of all us here tonight, supporters and many of our successors. In 2031, let’s not be the best private university for veterans, military-connected service members and their families. Let’s simply be the best university of any kind in the world for those who are serving or who have served. Let’s be the best university for vets, period. I really think we can do this, and if anyone around here doubts that, they should just look around. Look at what’s been achieved in just 10 years.”

Retired Navy SEAL Commander Mike Hayes and Medal of Honor recipient Slabinski closed the dedication event with a conversation onstage about their training and multiple combat experiences in Afghanistan and Iraq and how their lives in service so dramatically differed from anything else in civilian life.

At one point in the conversation, Hayes asked his friend who served 25 years in the Navy, “When you were their age (college), could you ever have imagined how your life had unfolded?”

“No,” Slabinski said. “I think all of us are in that same boat. Absolutely not. You don’t know where life is going to take you, but what a great ride it was.”

“When I was that age, I didn’t really ever imagine I could be a SEAL,” Hayes explained. “I think the real message and the meaning and the lesson for all the students associated with IVMF, what you can’t imagine today is imminently possible tomorrow. So, when you’re sitting on campus and you see the president or the CEO of JP Morgan or a Medal of Honor (recipient), that can be you. If you listen to the chancellor or Dr. Haynie and the challenge of what this organization can be, I promise you this organization will flood America with leaders. It’s going to happen. That’s why the celebration today, Day One, is such a celebration.”

The value of the center was perhaps best summed up early in Wednesday’s program when Army ROTC cadet Isabella Lee, a senior, told the crowd she came to Syracuse as one person and is soon to come out completely different and better, due to military training and support at the center.

“This program put me through the most uncomfortable challenges I have ever faced in my life, but I came out on the other side not the insecure and unsure kid that I was, but the confident, strong and determined leader that I am,” she said. “Among the tangle of schoolwork, training and extracurricular activities, this new facility that stands today provided a little bit of comfort to me. It was a place to stay between classes, to meet, to work – and to rest up. It can be stressful being a cadet in uniform, marching around campus or studying in a library and feeling just slightly out of place.

“But what really makes the NVRC special is that it’s dedicated to our servicemembers and their families, which makes it a very personal matter to me. My family has served for generations. We have seen what freedom costs. Soldiers do not just pay with their lives. They pay with missed children’s soccer games and school plays. They pay with their peace of mind and sleepless nights that are caused by PTSD, and they pay with every service-connected injury and every moment spent away from loved ones, fighting for the freedom of our nation. I am so proud to stand here today as a student of an institution that is ready to pay it forward.”