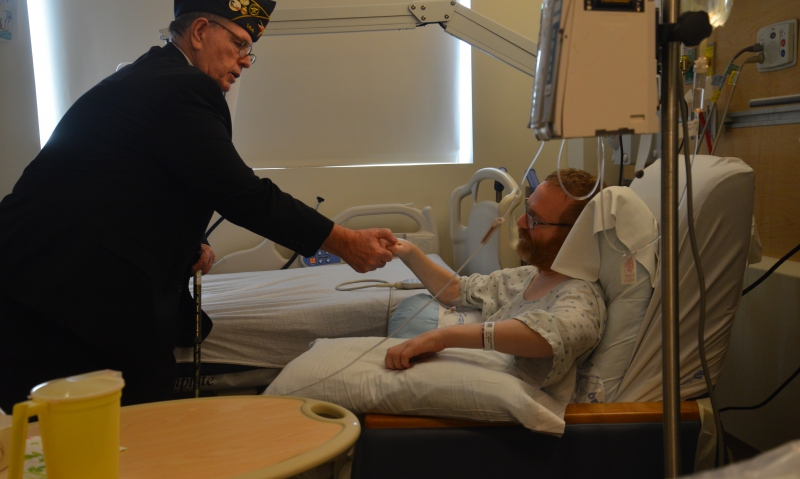 TomTvrdik, member of the Veterans Affairs and Rehabilitation Commission, visits a patient at the Washington DC VA Medical Center.

Members of The American Legion’s Veterans Affairs and Rehabilitation (VA&R) Commission engaged representatives from the Department of Veterans Affairs, recognized volunteers for outstanding service, and gave back to veterans residing in local medical centers and assisted living facilities on Feb. 22 during the Legion's annual Washington Conference.

Before the group boarded buses and headed out into the local communities to volunteer at the Washington DC VA Medical Center and the Armed Forces Retirement Home, National Commander Dale Barnett presented the VA Volunteer Services Worker of the Year Award.

“We have a proud tradition of service to America’s veterans,” said VA&R Commission Chairman Ralph P. Bozella. “Caring for veterans is a 24/7 job. It doesn’t matter if it is Christmas, Fourth of July or three o’clock in the morning.”

Department of Georgia Legionnaires James Whelan and Fred Zamora were presented with the award while Barnett donned Legion caps embroidered with the words “Volunteer of the Year” on their heads. Collectively, Whelan and Zamora logged more than 8,000 hours of volunteer service at facilities throughout Georgia.

Barnett shared some of his experiences witnessing Whelan and Zamora serving as volunteers. “They have worked so tirelessly,” he said. “There was never a day we walked through the hallways of a VA medical center and someone on staff didn’t know who these two gentleman were.”

Still on a high from the day’s presentations and speakers, the Legionnaires visited the Armed Forces Retirement Home and the Washington DC VA Medical Center.

In the spirit of giving back, Legionnaires at both locations distributed more than 50 gift bags donated by the Legion's Operation Comfort Warriors program. As they roamed through the hallways wearing their caps, Legion members could hear the distinct sounds of veterans recognizing the caps passing by their rooms.

“I’m a Legionnaire,” several patients at the VA exclaimed. While the patients and the volunteers went through the gift bags together, they shared stories about their service and talked about their time in the Legion.

“It’s really hard to fight back tears,” said Kelly Ackerman, vice chairman of the VA&R Commission. “It is very emotional because of the gratitude I have for their service.”

As they filed on to the elevator to head out of the hospital, the Legionnaires shared how touched they were during their time at the medical center.

“Visits like these are important. It is a way to show respect and let these veterans know that they are not forgotten, they matter and they are important to The American Legion,” Ackerman said.