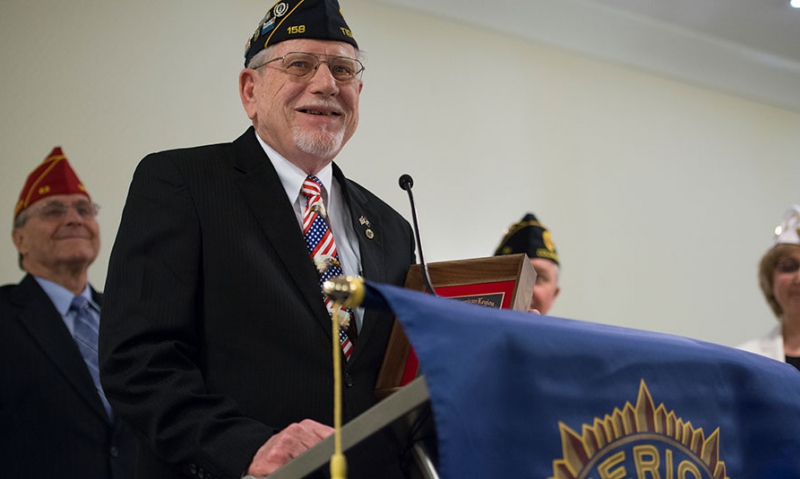 Kent Erickson has volunteered at the Portland VA Health Care System every Friday for the past eight years, delivering comfort items, smiles and personal time to the veterans he visits. Erickson’s service to his fellow veterans was recognized by The American Legion on Feb. 27 during the organization’s 57th annual Washington Conference – he was named the 2016 VA Volunteer Services Worker of the Year.

American Legion National Commander Charles E. Schmidt presented the award to Erickson during the National Veterans Affairs & Rehabilitation Commission meeting, honoring Erickson for his “service, dedication and commitment of giving back and continuing to serve America.”

As a volunteer at the Portland VA, Erickson meets the needs of veterans during their hospital stay by delivering requested comfort items such as blankets, clothing, books and toiletries. And during the holiday season he helps the American Legion Auxiliary with the hospital's Christmas shop by filling stockings with hats, scarves, hot cocoa mix, drawing utensils and more for the veterans.

“There’s no question of what the mission of the VA is and the purpose of our volunteers are – every one of them want to give back in some way, and Kent is a classic example. He’s giving back to his brothers and sisters who he served with or in memory of his brothers and sisters who he served with when he was in the Air Force,” said Shaun Benson, chief of voluntary services at the Portland VA. “We love having him, and it’s always enjoyable to see him every Friday. He represents The American Legion very well.”

Department of Oregon Commander Jim Willis nominated Erickson for the award because “Kent has given thousands of hours of volunteer time to his fellow veterans and their families,” Willis said. “His service is an example to everyone who strives to serve his or her fellow veterans. He is just a nice guy.”

When Erickson walks the hospital’s hallways to visit patients, he proudly wears his American Legion cap and an item that connects him to his service in the Air Force. As the Legion’s VA volunteer of the year, he was given a new Legion cap that features his award title – which will serve as a conversation-starter with the patients he visits.

“Uniforms tell a story and you can certainly see part of Kent’s story when he’s walking down the hall – he’s connected with the Legion, he’s connected with the Air Force and the fact that he’s a veteran,” Benson said. “And those are all conversation-starters when he walks into a patient’s room. So the impact he’s had at this VA hospital is knowing that he’s going to make a difference in a veteran’s life.”