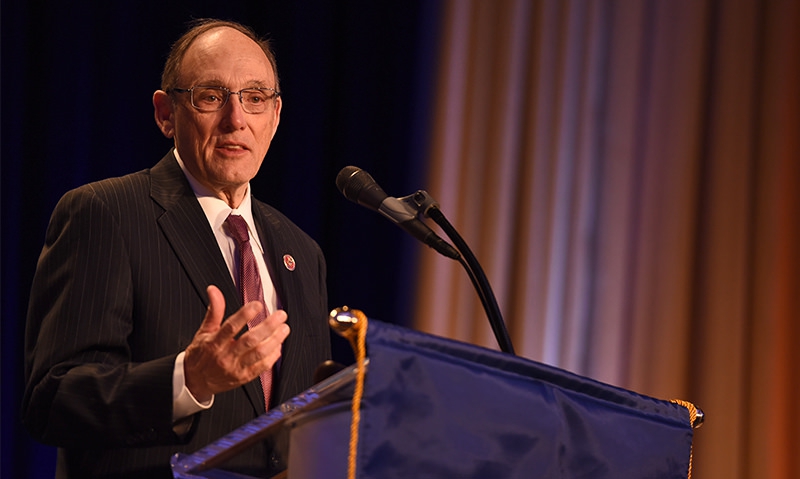 Two key members of the House and Senate Committee on Veterans’ Affairs offered up their plans for continued Department of Veterans Affairs reform in addresses during The American Legion’s Washington Conference.

“I am not sitting up here talking about privatizing the VA,” said Rep. Phil Roe, chairman of the HVAC. “I am talking about making the VA better. The VA in 20 years is not going to look like the VA today, I can tell you that.

“Medicine is changing. We have veterans living in very rural areas that need access. There’s going to be a tremendous amount of health care provided through smart phones. That’s going to change how we provide health care."

Roe, who served two years in the U.S. Army Medical Corps and then owned his own medical practice for 31 years, said he doesn’t believe funding is an issue for VA.

“I think we have the resources to take care of what we are doing today,” he said. “I think we need to do a better job of managing. I intend to hold the VA accountable.”

Roe said a VA accountability bill addendum his committee will mark up next week will give VA Secretary David Shulkin “the ability hire and to fire, or the hold people accountable for what they do.”

“If you feel that you’re not getting the care at the VA hospital, you should have a choice to go where you want to. “I want you to have the absolute best health care that can be provided by anybody in the world. You should have that as a veteran.”

Jon Tester, who serves as Ranking Member of the SVAC, said he feels Shulkin is the right person to lead VA. “He has an enormous task ahead of him,” he said. “An open dialogue between the Legion, VA and Congress is going to be critically important, as we all share the same goal of honoring our nation’s veterans.”

Tester said that while VA’s Choice Program connected several veterans to care, “it often left another veterans – at least in Montana – with the choice of waiting longer for their care or not getting that care at all.

“Some had spoken openly about permanently extending this program … or sending more VA resources into the private sector without boosting the capacity of the VA. In my opinion that would be disastrous for veterans seeking care.”

Tester said that veterans often tell him they love the care they receive from VA once they get that care. “The problem has been getting in the door,” he said. “You can be assured that I am going to remain committed to improving access to timely and quality care and benefits for you and your families.”

Unless the Choice Program is reformed, Tester said he won’t vote to extend it. “We need to untangle the web of multiple community-care programs and streamline access for veterans across this country,” he said. “Community care should be a seamless and efficient process that’s easier for veterans and providers to navigate.”

Tester asked that the Legion continue to provide oversight of Congress. “I have a request for each of you: hold me and my congressional colleagues accountable,” he said. “Be vocal. Be relentless. I am really sick and tired of Congress shaking its first at the VA without giving them the resources that they need.”