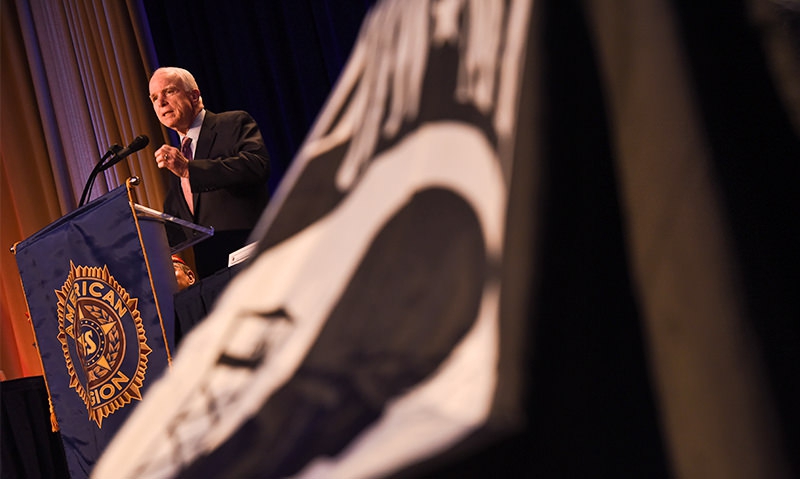 American Legion National Commander Charles E. Schmidt had the honor of presenting the organization’s Distinguished Public Service Award to U.S. Sen. John McCain, R-Ariz., Tuesday during the Legion’s 57th annual Washington Conference. McCain received the award for his commitment to the welfare of America’s veterans and their families.

“Thank you for this great honor,” said McCain, a member of American Legion Post 2 in Phoenix who currently serves as chairman of the Senate Committee on Armed Services, to Legion leadership gathered at the Washington Hilton in Washington, D.C. “It’s an honor to accept your national commander’s Distinguished Public Service Award.”

As he presented the award to McCain, Schmidt recalled his visit to Hoa Lo Prison in Vietnam last November, where McCain was held as a POW. “It was dank and depressing. It was not a nice hotel like this,” Schmidt said.

In his acceptance speech, McCain reflected on his POW prison, known as the Hotel Hanoi, that “those who I love most and know best are those I had the great honor to serve with in a hotel far away from here,” he said. “I am the person I am today, if there’s any small measure of success I have achieved, because of the comradeship and the love and struggle we waged together. Friends, fellow POWs, we were proud to come home with honor, and I’m honored to be with you today.”

McCain also shared issues affecting veterans that concern him, such as PTSD and VA wait times, stating that "veterans need The American Legion today more than any time ever. We need you.

In reference to improving veterans' access to immediate care, McCain told the Legion delegation that “veterans shouldn’t have to wait on a waiting list for days, weeks, months. What I want our veterans to be able to do is when they need the specialized care that only the VA can provide, we should make sure they have that. Veterans should not be put on a waiting list for medical care that they need immediately. "