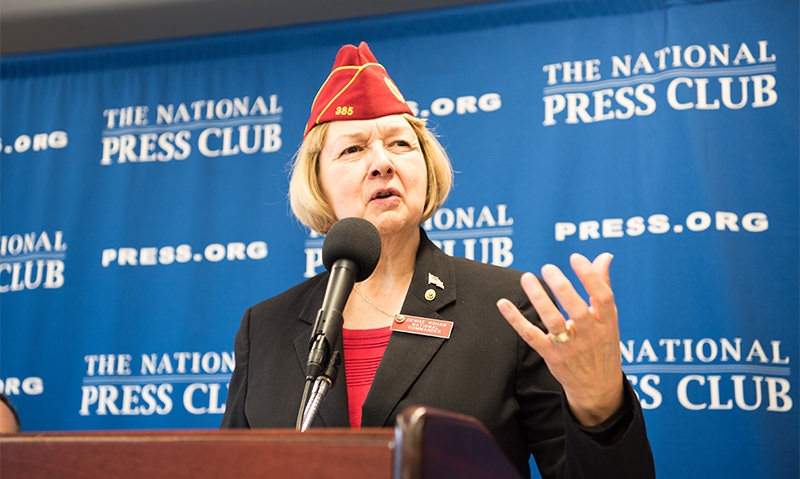 American Legion National Commander Denise Rohan appeared at a National Press Club Headliners Newsmaker session Feb. 23 in Washington, D.C., to discuss ways that the Trump administration and Congress can improve the delivery of benefits for more than 20 million veterans across the country.

“Our position about the Department of Veterans Affairs has always been clear: We believe it is a system worth saving,” Rohan said. “This doesn’t mean that we don’t recognize the important role that private providers play in veterans’ health care.”

Whether it’s treatment for post-traumatic stress disorder or research into state-of-the-art prosthetics, Rohan said these kinds of unique health care needs are simply best provided by the VA.

“Choice, when run efficiently, is an important component to overall VA health care,” Rohan said of the program that allows certain veterans to seek care outside of the VA. “But that choice should not lead to a private system that would break a solemn promise that we, as a nation, have made to those who have defended our freedom.”

According to Rohan, VA Secretary David Shulkin has promised to resist efforts to privatize his department. Rohan said The American Legion fully supports Shulkin’s decision in trying to stem back well-funded lobbying efforts to do just that.

“These men and women deserve far more than a health-care voucher and a ‘thank you.’ They deserve treatment in a system that was created specifically for them,” Rohan said. “It is our country that sends them to war and it is our country that should tend to their wounds. It is our country that owes them a network of trained professional counselors: veterans in their peer group who have gone through similar experiences and are ready to tell them that life is always worth living.”

Rohan said the suicide rate among veterans is a national tragedy. In 2014, the suicide rate for U.S. combat veterans, between the ages of 18 to 24 years old, was 10 times the national average. Rohan fears that rate would be even higher if it weren’t for a strong VA system, and advocates like the Legion who make suicide prevention a priority.

“Family members serve too, and they still bear many of the physical and emotional scars of that service,” she said. “Most people serving in the military believe that if you help their family, you are also helping them. That’s why The American Legion is generous in awarding scholarships for young people, Temporary Financial Assistance for needy children and offering a strong Family Support Network.”

As a veteran service organization dedicated to mutual helpfulness, Rohan said the Legion isn’t just interested in helping its members. The well-being of all veterans and their families is always a moral imperative, but it is even more important when people can rely on an all-volunteer force.

“What is certain is that our veterans, past and present, will have advocates in The American Legion fighting for them and their families here in Washington, D.C., and at home in their communities,” she said.

Part of the VA’s 2019 budget request includes $2.9 billion for the Veterans Benefit Administration. Rohan said this will help support the department’s implementation of the Veterans Appeals Improvement and Modernization Act.

“We are very pleased to see the increase in defense spending that the White House has proposed,” she said. “We believe this will go a long way toward reducing the appeals backlog and help veterans receive a timelier resolution.”

For Rohan, it is a very exciting time for the Legion as it kicks off its annual Washington Conference. The conference will include testimonies at congressional hearings, a Commander’s Call featuring speeches from a variety of federal government and agency officials, and other newsworthy events.

“From reforming VA to publicizing our volunteerism in the local communities, The American Legion understands and appreciates the important role the Fourth Estate plays in our republic,” Rohan said. “We are here to share our legislative priorities with our congressional delegations and remind them that America has an obligation to serve veterans as well as veterans have served America.”